But adds that Obama picked Hagel because he wants to "do serious, serious damage to our military capabilities" 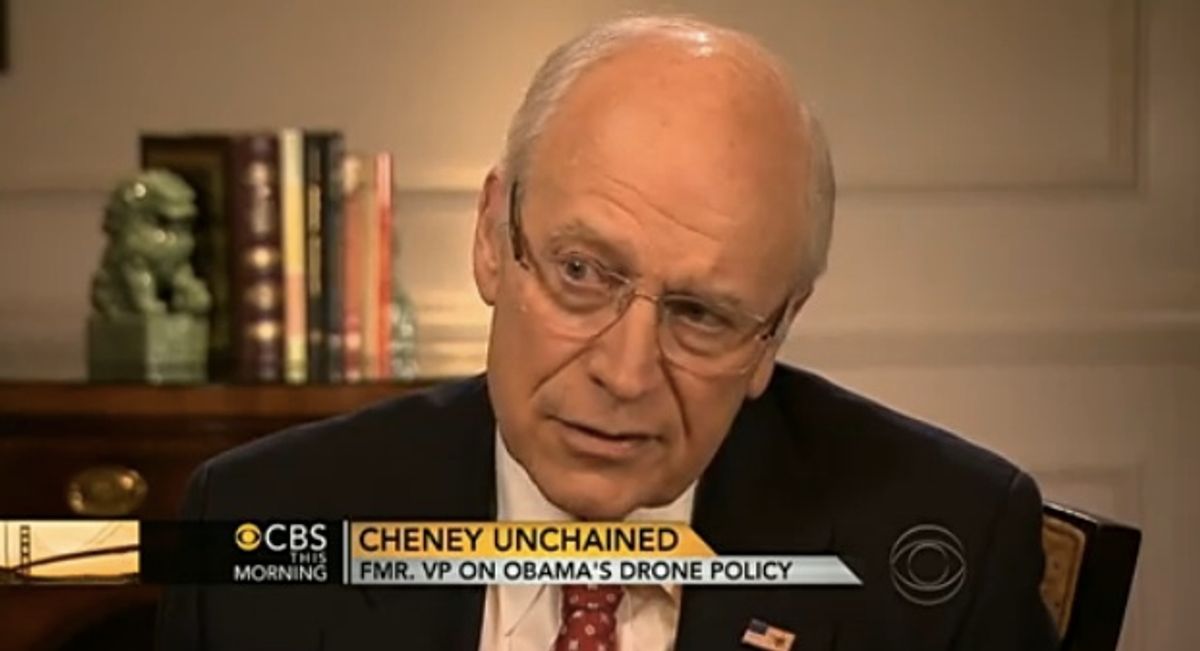 In a broad interview with Charlie Rose on CBS, former Vice President Dick Cheney backed the president's program of targeting U.S. citizens abroad with drones. "I think it's a good program. And I don't disagree with the basic policy that the Obama administration has pursued in that regard," Cheney said.

Cheney joins a handful of other Republicans who have defended the program unconditionally, even as more lawmakers are calling for increased oversight of the administration's targeting of U.S. citizens.

Cheney, of course, was and is a big proponent of the Bush administration's use of waterboarding, and even told Rose that he has no regrets about it:  "I didn't have any. Absolutely not." He added that waterboarding "absolutely" should still be part of American counterterrorism methods, despite what people like Stanley McChrystal say about it offending American values. "The question I think you've got to answer, Charlie, is how many people are you wanting to let die so that you don't, you know, offend your values?"

He also offered some criticism of Obama's "terribly flawed" national security policies. "I think the president's performance, by my standards, in the international arena, the Middle East and so forth, is worse than many of my friends and colleagues deem his domestic policies."

Cheney continued that Chuck Hagel and John Brennan have had "pretty poor" performances during their confirmation hearings. He added: "My guess is, if you look at what the president's motives are for picking Chuck Hagel, I think he wants a Republican to go be the foil, if you will, for what he wants to do to the Defense Department, which is I think to do serious, serious damage to our military capabilities."

Here's a clip from the interview: