Is there such a thing as an "Oscar curse"?

Actresses' careers languish after Oscar shows up. Is it just coincidence -- or proof Hollywood's tough on women? 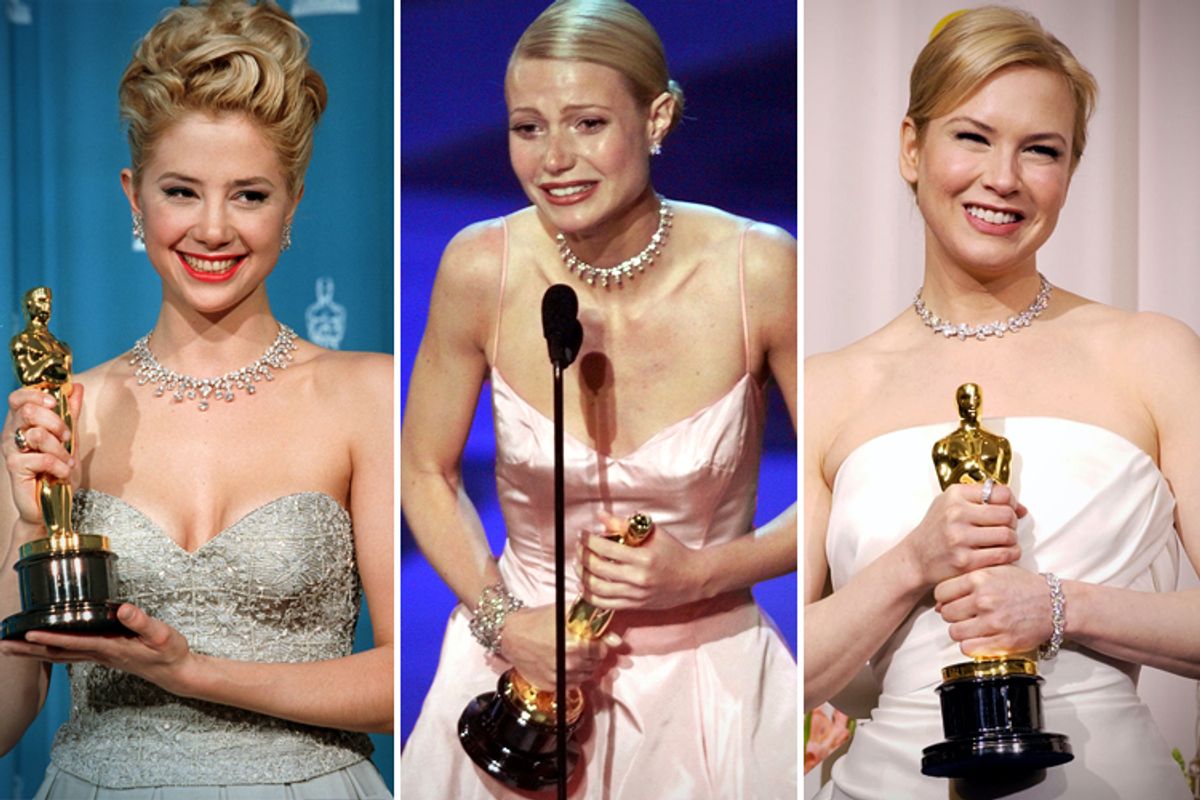 At this year's Academy Awards, Catherine Zeta-Jones and Renée Zellweger will reunite with the rest of the "Chicago" cast to present an Oscar. Zeta-Jones won an Oscar for 2002's "Chicago," while Zellweger picked one up the following year for "Cold Mountain."

Why, then, have they — and other Oscar winners, especially women — had such a difficult road after their crowning moments?

Zeta-Jones is beginning a comeback of sorts with roles in thrillers like "Broken City" and "Side Effects," after being in the wilderness for years, appearing in direct-to-video efforts (to be fair, she also won a Tony for stage work in "A Little Night Music"); Zellweger's last theatrically released film, "Case 39," came out in 2010. And they're not alone. Any Oscar obsessive can name actresses whose careers did not, in the long term, benefit from the academy's love: Mira Sorvino (who found it hard to live up to early promise), Halle Berry (who's been cashing in with movies like "Catwoman" and "New Year's Eve" for more than a decade now), and Gwyneth Paltrow (who, prior to her weepy speech upon winning an Oscar, was a beloved starlet -- hard to recall now!).

Winning an Oscar can hurt a career. There's the issue of the degree of exposure you're blasting the public with in a short span -- front-running nominees are on the cover of fashion magazines, on talk shows, on "Saturday Night Live," at the Golden Globes. It can be a lot for an audience member to tolerate.

"She had too much," said awards blogger Sasha Stone of Paltrow. "She was too pretty, too thin -- and look at her career after that Oscar win. Nothing. Anything she does now, she gets criticized for."

"Nothing" may be overstating it. But other recent winners, including Natalie Portman, Sandra Bullock and Kate Winslet, have taken low profiles after their wins, rarely granting interviews, working little and allowing the public some room to breathe. Wise, maybe, but no one treated recent Oscar winners like Colin Firth or Jeff Bridges with anywhere near the disdain that came Winslet's way when she eagerly accepted her Oscar, or that is likely headed in Anne Hathaway's direction after a season of mocking her eagerness to promote "Les Misérables." Meryl Streep declined to campaign for an Oscar for "Hope Springs" this year after her win last year, likely knowing that appearing overeager is a good way to turn the public against any actress. And the so-called Oscar love curse, which leaves professional achievement aside as a way of talking about winners like Winslet's and Bullock's bad luck in love, just shows how much the public loves Schadenfreude.

There's also a dearth of good roles for actresses -- and what we see as a curse afflicting the likes of Swank, Berry, and Helen Hunt may in fact just be the market correcting after an anomalous burst of good fortune. "I think [the Oscar curse] becomes a kind of maybe more fun and sexier way to talk about an employability curse that exists for actresses," said Nick Davis, an assistant professor at Northwestern who tracks the careers of best actress winners on his blog. "Finding the kind of role that's rich enough to get you nominated for an award is such a struggle that certain roles don't immediately or ever culminate in more of them; that has to do with the range of what's out there and how oversubscribed the profession is."

After all, most actresses very logically would like to take the opportunity to earn more money after an Oscar win. "'I've got a house I want to buy,'" said Jeff Wells of Hollywood Elsewhere. "That's the essence of what happens. They are persuaded, understandably, to take the money." Thus, you see Helen Hunt signing onto a diverse-to-the-point-of-incoherency slate of flicks in the year 2000, or Julia Roberts and Reese Witherspoon coasting in sub-par romantic comedies that feel unworthy of their formidable talents.

"Most genres where paychecks are possible don't really teem with female roles -- it's harder to make that move and not end up in 'Aeon Flux,'" said Davis, referring to Charlize Theron's notorious post-Oscar bomb. He cited Jeremy Renner's post-Oscar-nomination career in hit franchises like "The Bourne Legacy" and "The Avengers," while Theron and Berry were granted fewer opportunities to shine. It's an example, Davis said, of "the imbalance that exists in Hollywood."

And actresses tend to get awarded when they're younger than their counterparts in the male categories, bereft both of the long résumé that would ensure continued success and the experience to know the right roles to take. "It's very rare when it's in the groove of your career anyway," said David Poland, editor of Movie City News. "When Tom Hanks won back-to-back, it didn't change much immediately. If [young best actress nominee] Quvenzhané Wallis won, the odds of her coming up with anything else are very poor. The same was true of Tatum O'Neal. She never really had much that worked -- but she had an Oscar."

Which raises the final component part of the "Oscar curse" -- the sort of performers who win Oscars are not always Julia Roberts–level superstars. Some frequently mentioned names when the "curse" comes up are performers like Mo'Nique, who'd worked little as a dramatic actress, or Brenda Fricker, whose public profile was very low before winning.

"Dianne Wiest or Kathy Bates: There just were no offers. They were perceived as character actresses," said the Gold Derby blogger Tom O'Neil. "Dianne Wiest was able to get free champagne in restaurants for two weeks both times she won, but there was no impact at all on her career."

That said, that career is a very respectable one for a character actress.  And when it comes to leading ladies, Hilary Swank or Halle Berry might not get an Oscar for their crummy genre fare, they're still working, and still a part of Oscar history. Laray Mayfield, casting director for "The Girl With the Dragon Tattoo," "The Social Network" and Natalie Portman's upcoming "Jane Got a Gun," noted that Oscar nominations could, sometimes, lead performers to book not-quite-right paycheck roles, "but I'm not going to put that on an Oscar nomination. It could be a great movie at Sundance that does it."

She also expressed frustration at the notion of an Oscar curse, full stop. "I think it's hilarious people can turn something as lovely as winning an Oscar into ... nobody's allowed to enjoy anything. Give people a break! They worked hard, people acknowledged them, it's a wonderful thing. Let's not make it not wonderful."

Either way, Mayfield and others may have nothing to worry about. This year's best actress front-runners include Jennifer Lawrence, who's already hooked into two lucrative and critically acclaimed franchises, and Emmanuelle Riva, an 85-year-old actress who's said she plans to rest and relax after the ceremony.

"Whatever the case, Jennifer will probably be fine since she's already hooked into a franchise," said Michael Musto, the Village Voice gossip scribe, via email. "And Emmanuelle is not exactly a budding Hollywood ingenue whose future would be hurt.