The reality show hooks us in by having us do what contestants do: Judge 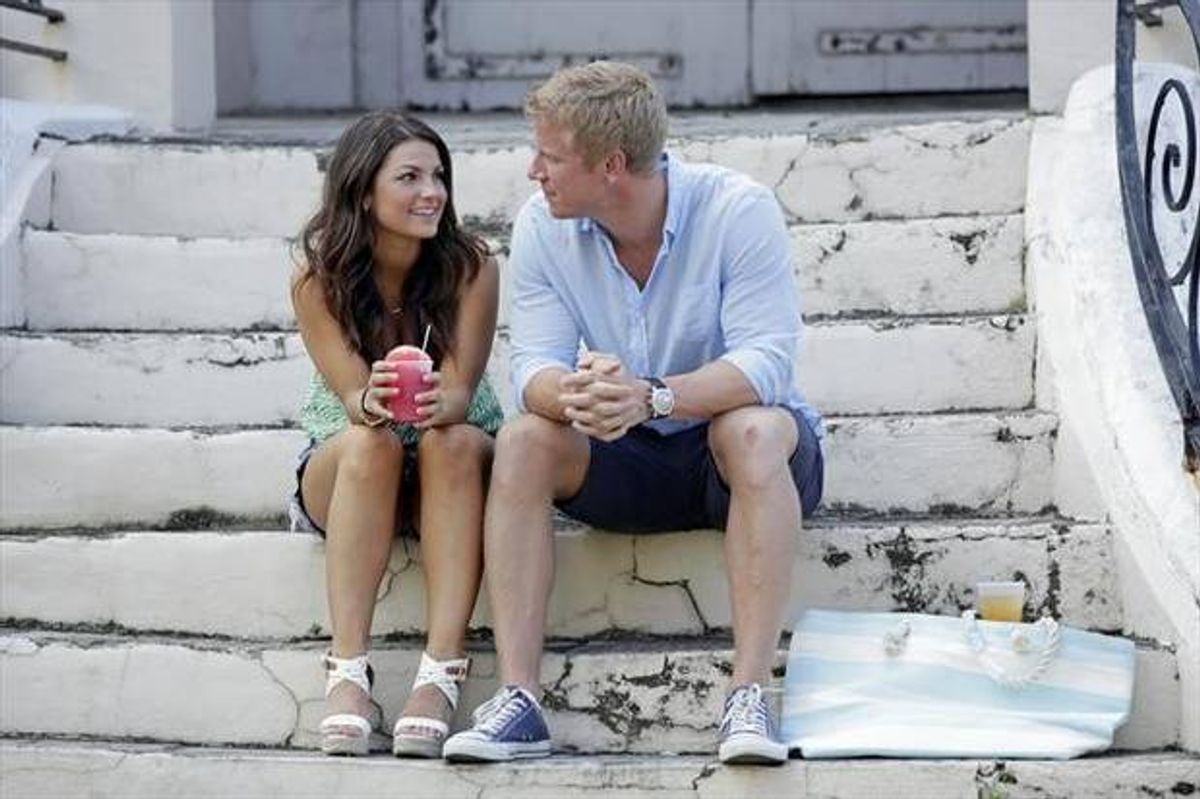 I have a rule about “The Bachelor”: Don’t start watching it. If I never start, I never want to start. I’ll miss entire cycles, blissfully unaware of the latest blandly attractive, cliché-spewing pair to not end up together forever. But if I watch even one episode, I’m hooked. The series’ formula, honed by canny producers over dozens of seasons, is so potent it works its addictive powers with one hit. I made a mistake and watched for the first time this season last night. It was a great episode — or a "great" episode — and one that laid bare the source of "The Bachelor's" addictiveness: Being on “The Bachelor” and watching “The Bachelor” are similar activities, even if the latter involves lots of exclamations about how crazy everyone doing the former is.

While watching “The Bachelor,” the audience makes judgments about what the contestants are really like based on very little information, highly choreographed appearances, and an endless amount of self-flattering self-presentation — which is exactly what the contestants are doing too. We aren’t as naive or saccharine as the participants; we’re not looking for "true love" and we have access to our entire vocabularies. But we are constantly evaluating — she seems crazy, she seems nice, he’s so bland, they have good chemistry — and so are they. In each episode, we get to check our own judgments against everyone on the show’s, and as ninny-brained as those people may be, there is something tremendously satisfying when our and their determinations match up.

Last night night’s episode was a perfect example of the way the show is pleasurable because it reaffirms our own insights into its characters. This season centers on Sean, a blond hunk who likes practical jokes, sounds even faker than usual reading the scripts the producers give him, and otherwise evinces absolutely no personality. He had winnowed his field of possible mates down to six, and one of them was an A-class reality TV villain named Tierra.

Tierra is a 24-year-old who does not play well with other women. She started the episode by singing “The cougar’s back in town” after AshLee, a 32-year-old who is totally in “love” with Sean and is so well-meaning and earnest she is going to get her heart stomped for sure, was awarded a solo date. “When I’m 32 I wanna be married … Like, you’re 32 years old,” Tierra sassed to the camera, ensuring that, because I am almost 32 years old, I will hate her forever. (Again, this is how watching “The Bachelor” works: You form snap judgments for totally personal reasons, and then take pleasure in finding evidence to support your conclusions.)

In “Bachelor” parlance, Tierra is not “there for the wrong reasons” — i.e., just to be on TV. But Sean is not “seeing what everyone else sees” — i.e., her being terrible to everyone who is not him. Things Tierra does not show Sean are that she is rude, a huge complainer (after getting her solo date, a trip through the town in St. Croix, she wishes she were going on a boat instead because “Being attacked by bugs, and the sweatiness, and my makeup dripping off, that’s not cool”) and that she’s one of those women who has never gotten along with other women, and thinks this is because all other women are jealous. Tierra would say that all the other women on the show are “Mean Girl”-ing her, and she wouldn’t be wrong. The other women would say Tierra is a Mean Girl, and they wouldn’t be wrong.

On AshLee and Sean’s date, Sean asked AshLee about Tierra, opening up a smack-talking session that AshLee probably relished, but at least did not start herself. (AshLee has her own problems: Her “abandonment issues” make it hard for her to open up to anyone so “it feels good to finally open up to” Sean, on television. Future ouch, you poor, poor idiot.) AshLee's complaints get back to Tierra, so, of course, they have to fight it out.

Tierra got, and deserved, the bad edit. AshLee is sanctimonious as all get-out, acting like being polite is the only virtue in the whole world, but she stays calm while Tierra lets loose with a series of self-involved gems including, “Girls are jealous. Men love me,” “I know, though, in my own skin, I’m not rude,” and “No, my parents said, 'Tierra you have a sparkle, do not let those girls take that sparkle away!’” The best came after AshLee told her that instead of saying good morning Tierra just stankly raises her eyebrow. “I can’t control my eyebrow!” Tierra screams. “I can’t control my eyebrow!! If I could walk around with a smile 24/7, I would, but my face would get tired.” At that I raised my own eyebrow, completely under my own control, as high as it could possibly go.

While this fight was going on, Sean was talking to his sister Shay — the wise woman who put him up for “The Bachelor” to begin with. He explained that all the women in the house don’t like Tierra, but he does. (To be fair, with Sean, Tierra does stop complaining and even dances around in the street. She seems kind of fun.) Shay reminds Sean of the one piece of advice she gave him about the show: “Don’t end up with the girl no one likes,” another piece of mean girl advice, but one that deserves an "Amen." Sean heads back to the house so his sister can meet Tierra and help him figure her out, but instead finds Tierra sobbing. She complains about how hard everything is, he soothes her, walks around the block, hears his sister's sage wisdom in his head, comes back and sends Tierra home.

Afterward, Sean said he had a “moment of clarity” that this woman would not be his wife, and decided to send her home because the experience was “so hard on her.” (This is pure dickishness masquerading as kindness; don’t tell someone you’re dumping them for their own good, even if they are terrible.) Sean’s moment of clarity was probably more like, “Damn, this chick is crazy and super high-maintenance," or at least I hope it was: Must he be boring all of the time? Whatever it was, it resembled the opinion of most people watching from home and all the other women on the show. That Sean could come to the "right" conclusion and send Tierra home based on totally anodyne input from his sister, the modulated concerns of another contestant, and his own powers of observation reaffirms that something about "The Bachelor" is working. See, he figured out the truth about Tierra.  Maybe in five weeks he’ll figure out his wife.