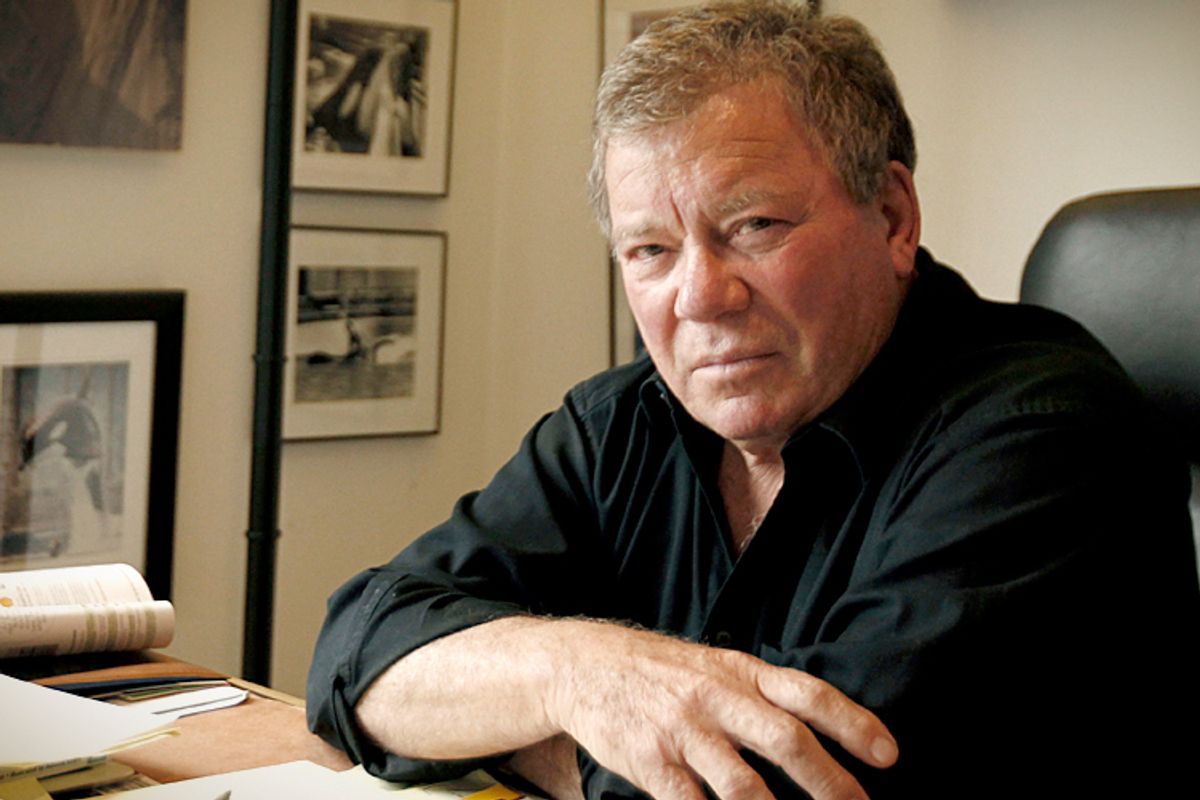 People of the Internet, your nerd lord is displeased. James T. Kirk himself, the man who, at 81, is still in the game enough to have a vibrant Twitter presence and his own app, would like you to know he's pretty grossed out by what goes down on Reddit.

In January, William Shatner joined Reddit, and soon after posted a fairly innocuous question about turning off private messaging, the better to filter out those "I can choose to ignore." What followed has been a lively and often contentious conversation about the nature of Reddit itself, and the line between freedom of expression and being a plain old jackass.

"I am appalled by some of the immature, horrifically racist, sexist, homophobic, ethnic ... etc ... posts that are just ignored here," Shatner wrote. "Why are these accounts still active? While Reddit has done well in getting interest from the mainstream I just wonder if by allowing these children to run rampant and post whatever they feel will cause the most collateral damage if Reddit is biting off it's [sic] own nose in taking that step to become a mainstream community … The fact that someone could come here, debase and degrade people based on race, religion, ethnicity or sexual preference because they 'have a right' to do so without worry of any kind of moderation is sending the wrong message, in my humble opinion. I don’t pretend to know where the managers of Reddit wish to go with this site but embracing that kind of culture I feel is counterproductive to where this world is heading and I think that is probably hurting this site."

The thorny and difficult-to-enforce issues that Shatner brought up were met with both hearty approval — "Shatner is right that this behavior is rampant on Reddit. And I, personally, am a bit turned off by it as well" – as well as the expected cries of "I think anyone calling for the censorship of others just because they disagree with the sucky things they say are actually far worse. In other words, calling for the censorship of racists, sexists, et al., is worse than being one."

Taken by itself, the Shatner discussion is just one recent version of a conversation that's been going on in multiple corners of the Internet every single day for over 20 years now. Someone says, "Civility!" Someone else yells, "Free speech!" Someone says, "How would we enforce this?" And it goes on and on in an endless, mind-numbing and spirit-crushing loop. This one just happened to get a little more attention because of the Starfleet aspect.

But what makes the exchange compelling is that it's one that has to keep happening. We have to keep articulating what we believe are the boundaries and guidelines. Last fall, when Gawker exposed Michael Brutsch as one of Reddit's most revolting trolls, the story illuminated how stomach-churningly complicit in his rampage of misogynistic, racist and perverse behavior the Reddit administrators and community had been. And so all credit goes to Shatner, for being more than just a goofball from TV commercials but a thoughtful participant in the online community.

He understands the challenge of enforcement and the need for good modeling, noting, "There are rules here — have you not looked at them? All I am asking is why are there rules if they are not enforced? And if censoring or disabling accounts is not an outcome of breaking the rules, then what exactly is? … Wouldn't the awesomeness of Reddit make [trolls] want to adhere to the rules of polite society if the rules were enforced? It would seem as if you are afraid that if there were some actual rules of real life imposed here that people wouldn't want to be here anymore because they cannot act out and be outrageous?"

And if there were ever a moment in online communication that deftly illustrated the brazen ignorance and myopia of those who hide behind the words "free speech," it'd have to be Shatner's response to the poster who asked, "Your saying reddit should not allow for the first amendment?" [sic] "First of all, I'm Canadian," he replied. "Second of all Reddit is world wide. So 'first amendment' means nothing online."

I want William Shatner to fix the entire Internet now. I want him to take a look at what goes on in the YouTube comments and tone that crap down. I want him to go into the comments section of every non-recipe-related site and express his disappointment in our species. I know he's neither the first nor the last reasonable adult with a brain to plead, "Remember the human. When you communicate online, all you see is a computer screen. When talking to someone you might want to ask yourself,  'Would I say it to the person's face?' or 'Would I get jumped if I said this to a buddy?' Adhere to the same standards of behavior online that you follow in real life." But he also has the admiration of enough people that maybe his message might penetrate the troll brain of even one otherwise gross person. Make it work, TJ Hooker!

William Shatner isn't some technology-averse geezer making a plea for simpler times. He's someone who lives and breathes in the online world and respects the "awesomeness" of it. He knows we can do better, and he's sincerely asking how to do it. It's a bold, feisty challenge – but if you're going boldly into new worlds, you're going to come up against monsters – and maybe you should listen to the guy who knows all about how to fight them.