Are liberals being hypocrites about Obama's wars? 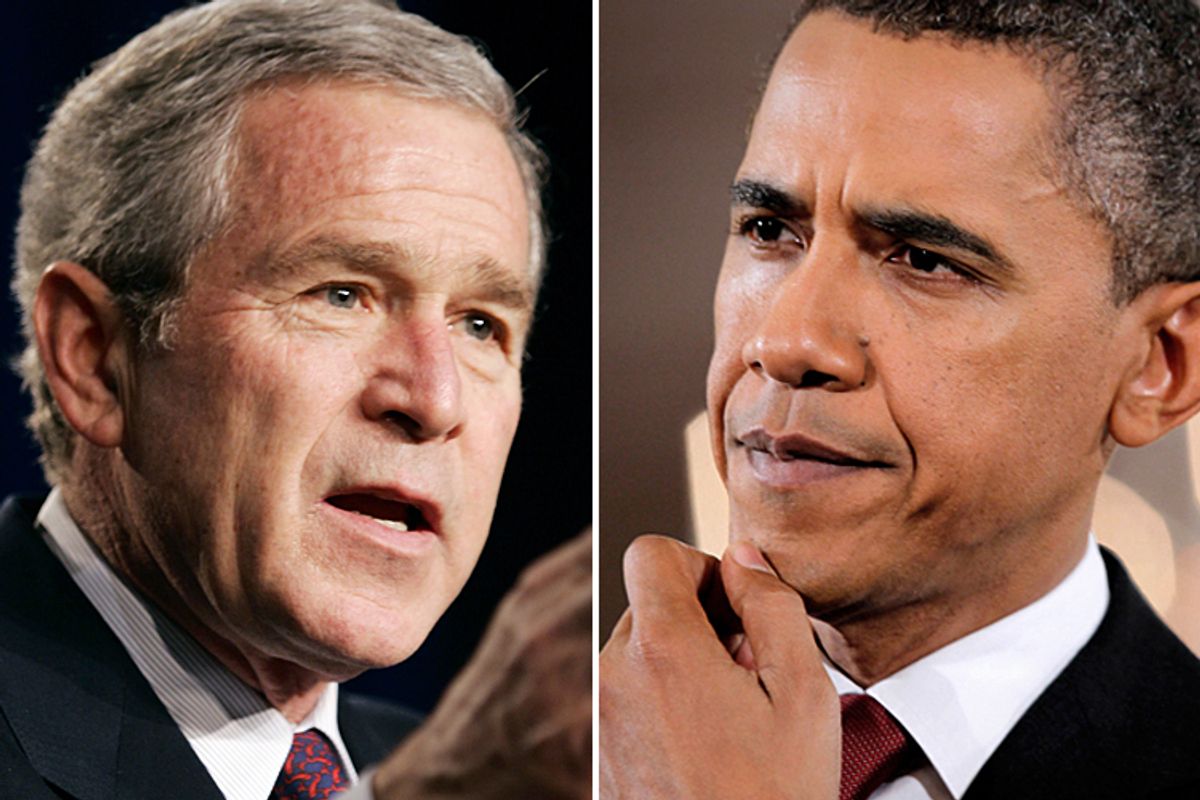 The Atlantic's resident thoughtful apostate conservative Conor Friedersdorf published a piece this morning arguing that progressives who furiously fought against Bush's "war on terror" have internalized many of its central tenets, now that it's being waged by Barack Obama. Friedersdorf says liberals made various critiques of Bush's foreign misadventures -- that they caused "blowback," that they were an abuse of executive power, and that they implied a forever war without any possibility of an ending -- that they are now largely not making against Obama, even though all those arguments still apply.

The reason for this, according to Friedersdorf, is that everyone hated Bush and knew he was incompetent, but people like Obama because he's clearly smart and conscientious, which causes people to defend actions they would have criticized under his predecessor:

Their ideology leaves them strangely unequipped to grapple with power abuses by a man whose personality they like and whose political philosophy they largely embrace.

This shouldn't surprise anyone who has observed uncritical progressive hero worship for Woodrow Wilson and FDR*. Progressives and neoconservatives share a proclivity for romanticizing the ability of powerful presidents to heroically and unilaterally push through the energetic policies they favor. If you want to understand why Glenn Greenwald so often clashes with his fellow progressives, it is partly because he believes much more than they do that concentrated power is always dangerous -- that process and formal limits on power are always important. You'd think that the sorry civil-liberties records of bygone progressive politicians would make today's progressives more attuned to their ideology's most dangerous proclivities.

(Friedersdorf, to his credit, struck out Wilson's name after I and a bunch of other liberals pointed out that modern progressives regard Wilson as something of a vile racist, though some people more charitably view him as a vile racist who supported a couple of good domestic reforms.)

It's obviously true that Obama's getting far less shit than Bush did from the progressive movement. But a lot of different categories of "liberals" and "progressives" are sort of getting lumped together, and Friedersdorf's choice not to name names doesn't help.

To begin with: A large number of liberals supported George W. Bush's foreign policy, at least up until things started going disastrously wrong, some time after "Mission Accomplished" day. Washington Post and New York Times edit page liberals, New Republic neoliberal liberals, tons of congressional Democrats, even lots of still-respected young progressive blogosphere types all supported invading Iraq as part of our new war on terror. For that crowd, "I support Obama's wars because he is going to manage them more competently" isn't at all hypocritical or contradictory. They're hawks! If there were specific Bush administration actions they criticized then that they defend when carried out by Obama, that's worth calling out, but for the most part it makes sense for a liberal interventionist to defend foreign intervention by a liberal.

A huge number of liberals have always been hawks, almost since the dawn of the progressive movement. Mainstream American liberalism has been associated with interventionist foreign policy since the beginning of the 20th century. It's the American left that's antiwar. The position that waging wars is fine when smart, responsible liberals are in charge but bad when reckless conservatives are in charge is not new to the post-Bush era -- it was LBJ's argument against Goldwater. You can't trust that nut with the bomb, but you can trust us to responsibly burn down villages until the advance of communism is stopped.

Meanwhile, it was The Left -- the radicals, anarchists, commies and socialists who were regularly locked up by people like President Wilson -- that was consistently antiwar (though some commies did eventually support WWII, for obvious reasons). In the 1960s, it was mainstream liberalism versus The Left again, and while lots of people think The Left ended the '60s by taking over the party, the mainstream liberals basically remained in charge of Democratic Party foreign policy. (The American right, too, was broadly anti-interventionist for years, though anti-communism during the Cold War kinda killed that strain. But Nixon did campaign on "ending the war," even if he "ended" it by keeping it going for years and secretly bombing Cambodia.)

The fight is still going on in the Democratic Party, as prominent opponents of the Obama administration's civil liberties record like Sen. Ron Wyden could tell you. But someone like Sen. Dianne Feinstein isn't being hypocritical: She voted for the Iraq War resolution! (And not many of the sort of progressives I think Friedersdorf is talking about here would defend Feinstein's Iraq or FISA votes.)

I also think it might be slightly hard to find examples of glaring liberal hypocrisy on the war on terror because there aren't actually that many progressive defenses of Obama's foreign policy. There is undoubtedly less outrage, but ignoring the administration's more questionable actions is far more common than defending them, at least among the sort of liberals I read. That's obviously not a strong claim for liberal intellectual heroism -- "just look the other way for now because the other guy is worse!" is probably a fair caricature of lots of liberal thought during the last election -- but it's still quite different from claiming that Obama's policies were and are being actively defended by antiwar liberals. What defenses there have been have been from people who wouldn't ever characterize themselves as antiwar, and if they didn't support Bush's wars it was because they thought he was crappy at them.

Most important, though: There's also just a ton of liberal and leftist critique of Obama's foreign policy going on all the time, from the Guardian to the Nation to Rolling Stone to here to Mother Jones to Wired and on and on: These are all very prominent liberal opinion organs, and none of them have ignored the administration's foreign policy and its attendant transparency failings, at all. The New York Times -- "even the liberal New York Times"! -- has done great reporting on Obama's drone war and its editorial board has questioned his tactics and disclosure. Here's the ultimate organ of mainstream American liberalism sounding very slightly like Glenn Greenwald: "We do not buy the administration’s claim to have the authority to kill Americans, and other suspects, far beyond any battlefield with no oversight and no review."

It's true that there are a lot of, shall we say, casually political liberals who decried Bush's wars and then voted for Obama, but regardless of whether you think Obama's civil liberties and foreign policy records are as disastrous or wrongheaded as Bush's, I think the claim that there are a ton of hypocritical progressives defending a Bushian record is overstated. Yes, a lot of quite liberal Californians reelect Dianne Feinstein every six years -- but she's always been awful and they've always been doing it. The sad truth is that lots of Americans were and are willing to sacrifice civil liberties for security no matter who's in charge and lots of people pretty consistently underestimate the negative consequences of war, until they're unignorable.