Betty Friedan started a revolution — and we're still not there yet

It's been 50 years since "The Feminine Mystique" came out, and we are still feeling the pressure to "have it all" 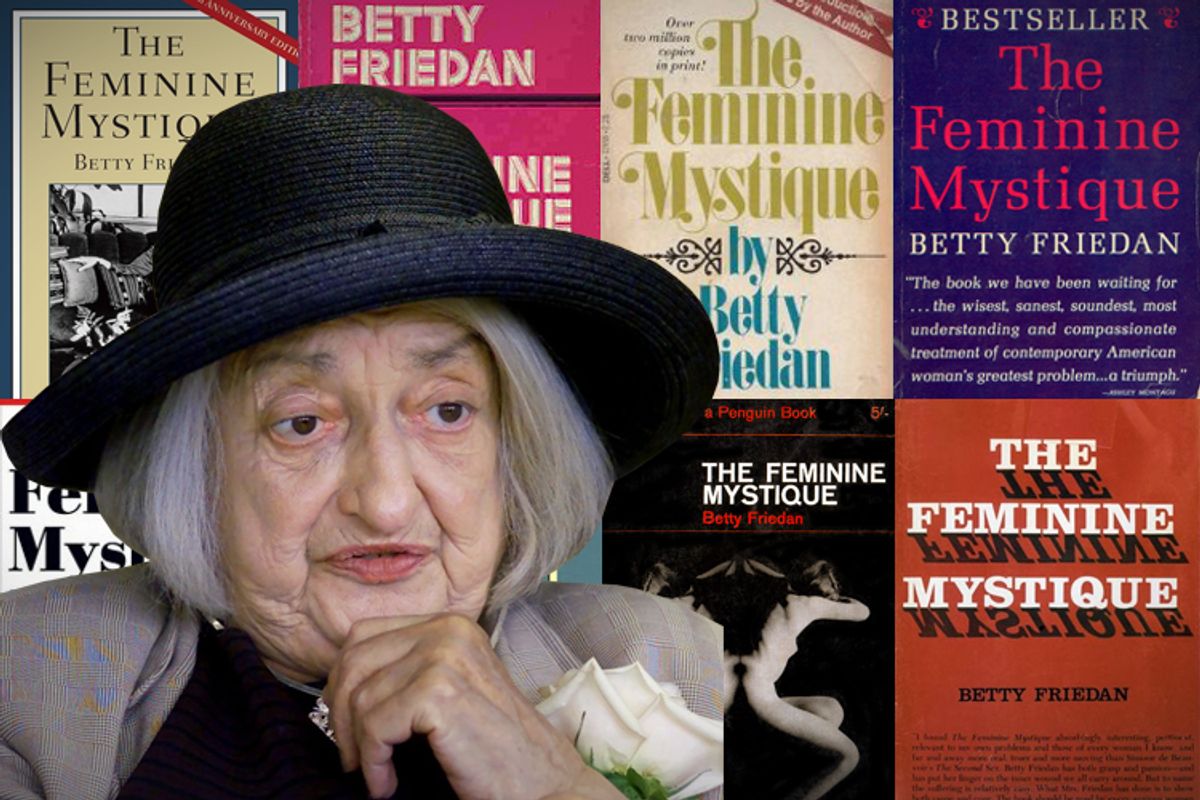 Middle age is not generous to females. A man in his sixth decade can, like Alec Baldwin just this week did, proudly announce imminent parenthood with one's yoga instructor spouse. He can be a George Clooney, appearing on magazine covers looking like the guy every guy wants to be. But for women, it's different. As Tina Fey once said, "The definition of 'crazy' … is a woman who keeps talking even after no one wants to fuck her anymore." And that would generally be sometime soon after 30. But Betty Freidan's groundbreaking "Feminine Mystique," which turns 50 this week, is celebrating its milestone by getting a fresh shower of attention -- showing both just how remarkably it's aged and how stunningly topical it still is.

Friedan's book was a wallop of a tome, a peek behind the placid façade of the happy homemaker and into the dark heart of a seemingly enviable segment of American womanhood. Educated women, with their nice families and pretty homes, Friedan revealed, weren't fulfilled by staying at home and waxing their floors. They needed more. And by starting the conversation about that need, by making it OK for women to want something else, Friedan helped start a revolution.

It has been a long time since I first read "The Feminine Mystique" as a bright-eyed young "feminazi," checking off her required list of important authors: Susan Brownmiller, Kate Millet, Adrienne Rich, Barbara Ehrenreich. Then, Friedan's searing look at the previously unexpressed pain of American women seemed like a relic of another era. I, after all, had grown up in a world of Gloria Steinem and Mary Richards. In my lifetime, women had gained the legal right to abortion and to go to West Point. I came of age as Susan Faludi and Naomi Wolf were reinventing the concept of feminism, yet again, for Generation X. I had opportunities – educationally, vocationally, sexually -- that my grandmother's generation never dreamed possible.  And yet today, years later, I come back to Friedan's book as a working mother. I understand in a very different way the howl of frustration that she articulated so poignantly. And I think, Holy crap, this is our lives right now -- and then some.

Friedan wrote the book because "no magazine would publish" it as an article. Just last week, after inviting feminist writer Kristine Holmgren to blog for them, Beliefnet told her they were "concerned about the negative connotation that our readers may associate with the word 'feminism'" -- and asked her not to use it.

Friedan famously identified "the problem that has no name" -- the unhappiness and lack of fulfillment that came from the relentless pressure on women to conform to a narrow and limiting feminine ideal. Then, it was about being a traditional housewife. Now, the challenge we face is that we're expected to somehow "have it all," an insidious and unwinnable concept – while simultaneously being undermined on every single front.

Today, many of us have enviable careers – a fact we apologetically explain by quantifying our professional successes and making sure we repeat, over and over, that our first, best and most important job is as a mother. We wage "mommy wars" that pit stay-at-home mothers against working ones. We second-guess women for wanting to return to work after having kids but we're disdainful of those who stay home too long. We fetishize Martha Stewart–level domestic perfection, pinning our cake-decorating inspirations on Pinterest – while simultaneously aspiring to attain the now all but required bikini-hot, post-baby MILF status. And hoo boy do we denigrate women who opt out of motherhood entirely. I don't know about you, but there are days when I think that if all I had to do to be considered doing right by my sex was put on a crinoline, vacuum the rug and make somebody a martini, I would have it easy.

Feminism opened a million new doors, but our cultural anxiety about and animosity toward women swept right in to create new wormholes of dread just beyond them. We have gained so much, and yet we struggle mightily with all the guilt and pressure that have come with every one of those victories. Five full decades after Friedan sent out the rallying cry for us to be seen as more than just wives and mothers, our president refers to "our wives, mothers and daughters" when addressing the nation as if, when he speaks to the American people, he's not speaking to wives, mothers and daughters. It's been 50 years of hard-won battles and gains for women, 50 years of fighting to write for ourselves our place in American culture. So how much has changed since Friedan sent out a flare called "The Feminine Mystique"? Everything. And nothing. And our definition of what it means to be a woman didn't get easier -- it just got impossibly broader.