FACTCHECK: State of the Union

How accurate is the president's big speech? Salon's Alex Seitz-Wald is on live truth patrol 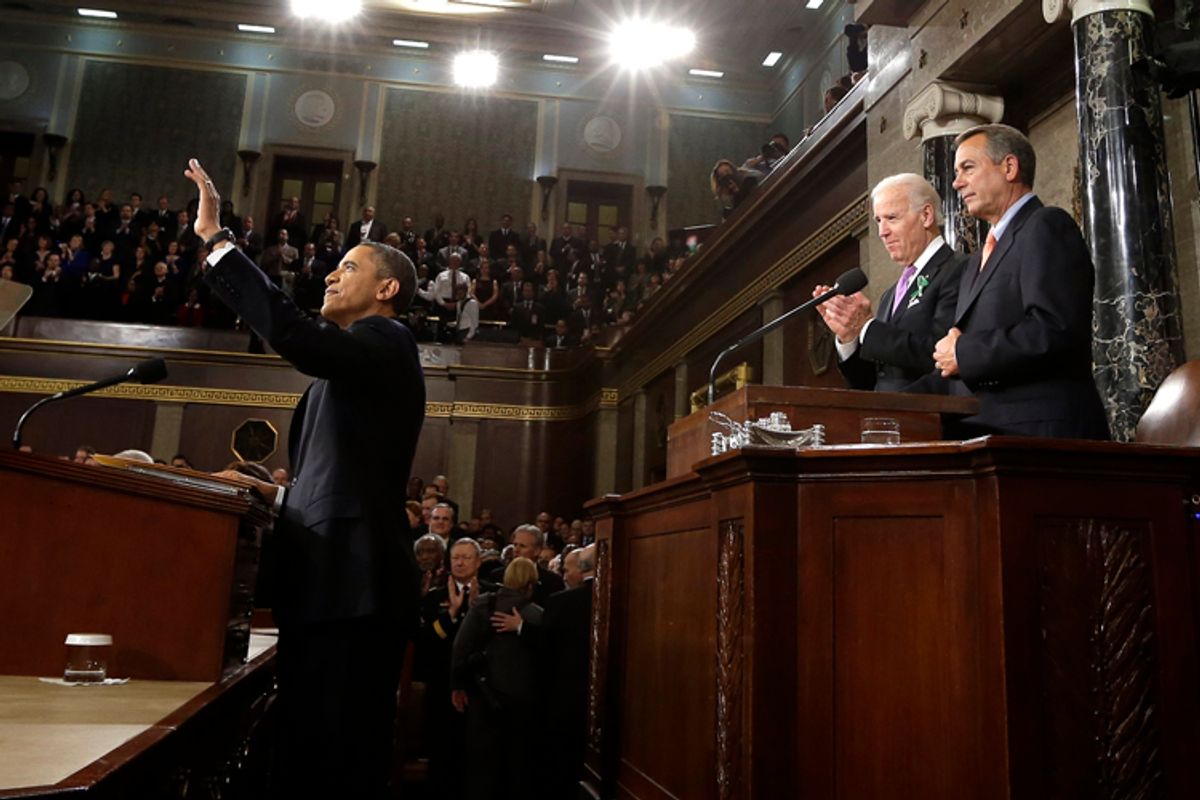 Salon's Alex Seitz-Wald will be here at 9 p.m. eastern this evening to offer a live fact-check of the president's assertions during the State of the Union address.

9:20: A smorgasbord of accomplishments -- Obama goes through a whole bunch of them right off the bat, so we'll go through them one by one: "After a decade of grinding war, our brave men and women in uniform are coming home"

-- Mostly true, Obama has pledged to pull out troops by 2014, but whether that will be a full withdrawal is a bit unclear as some officials have expressed the desire to leave troops in the country beyond the pull out date.

"After years of grueling recession, our businesses have created over 6 million new jobs."

-- Yes, but that measure starts from a point that makes the number more flattering for Obama and probably  includes only private sector jobs, not government ones, which have been destroyed under Obama. FactCheck.org has more on a similar claim from the campaign.

"We buy more American cars than we have in five years, and less foreign oil than we have in 20.  Our housing market is healing, our stock market is rebounding, and consumers, patients and homeowners enjoy stronger protections than ever before."

-- All very true. Just this week, the Dow came close to an all-time high and oil exports did hit record  levels. The housing market is still weak, however, and most of Obama's plans have proven impotent.

9:30: Tax reform pipe dream -- “A tax code that lowers incentives to move jobs overseas, and lowers tax rates for businesses and manufacturers that create jobs right here in America.  That’s what tax reform can deliver.  That’s what we can do together.”

-- A similar call has appeared in every one of Obama’s State of the Union addresses every year, and so far gone nowhere.

-- Yes, but. As Salon’s Andrew Leonard noted, the move is little more than window dressing.  The $100 million that Apple is investing “isn’t even a rounding error on the balance sheet of global tech manufacturing. The cost of building a new, state-of-the-art microchip fabrication plant, for example, is around $5 billion and rising.” He continued: “Apple itself currently has around $123 billion in cash sitting around, waiting for someone to figure out what to do with it. $100 million, in the context of Apple making a significant dent in bringing the manufacturing of its products back to the United States, is a joke.”

-- True. Some estimates had it even higher, for instance, one organization estimated the $3.8 billion federal investment led to $796 billion in economic impact, for a return of investment of almost $210 per dollar invested.

9:43: -- Preschool: "Tonight, I propose working with states to make high-quality preschool available to every child in America."

-- A laudable goal, but President Clinton proposed it over a decade ago. "That means quality preschool and after-school, the best trained teachers in the classroom, and college opportunities for all our children," he said in his eighth State of the Union address.

10:00 -- Counterterror transparency: Obama said of his efforts to fight terrorism, “Throughout, we have kept Congress fully informed of our efforts.  I recognize that in our democracy, no one should just take my word that we’re doing things the right way.”

-- False. The administration has repeatedly refused requests from Congress for specific information about the legal justification for drone strikes, among other tactics, such as FISA courts. Marcy Wheeler tabulated 15 instances where members of Congress requested information and were rebuffed on drones.