Devoted patron John Alleman died after eating in a Las Vegas restaurant that boasts a "Taste Worth Dying For!" 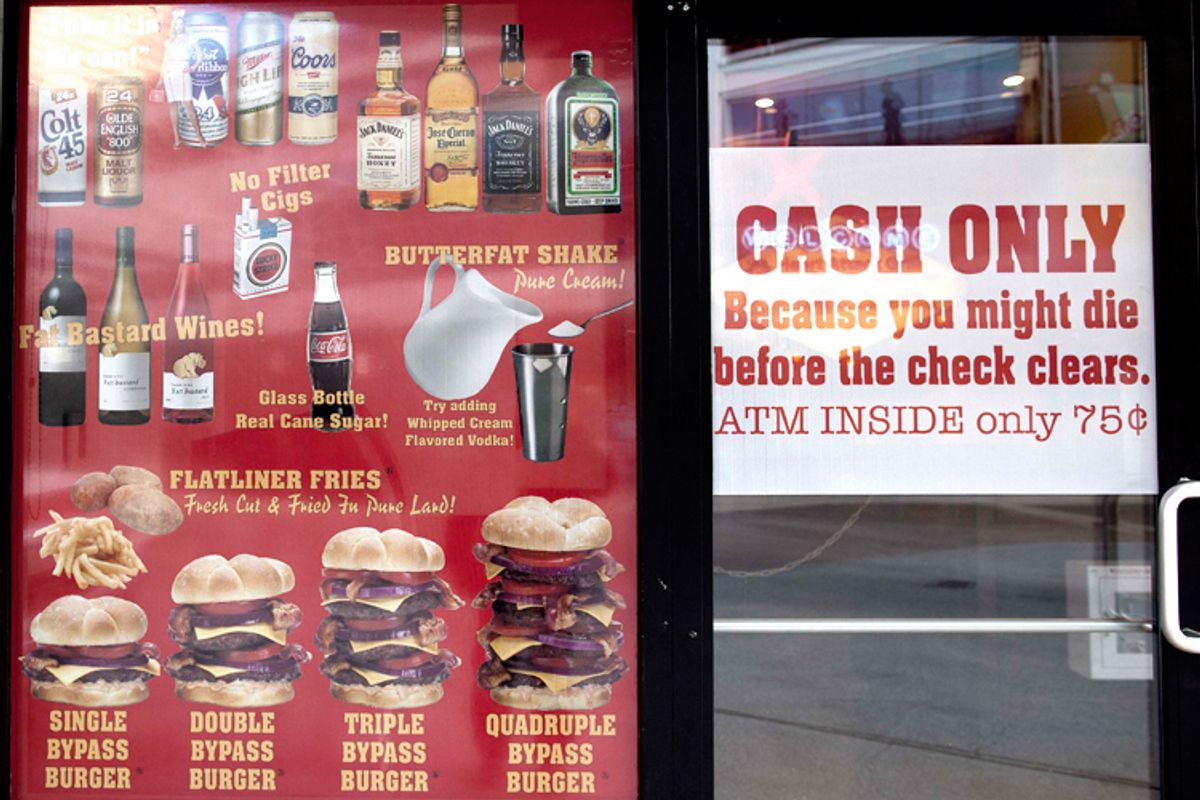 Menu offerings and warnings are posted in the window of the Heart Attack Grill. (AP/Julie Jacobson)
--

There can be little doubt that John Alleman died in the manner he'd been preparing for all his life. The 52-year-old unofficial patron saint of the Las Vegas restaurant called Heart Attack Grill was taken off life support Monday after suffering a heart attack a few days earlier.

Alleman was a devoted patron of the restaurant, whose motto is "Taste Worth Dying For!" Restaurant owner Jon Basso, who opened the restaurant in October 2011, told the Las Vegas Sun this week that Alleman "never missed a day, even on Christmas … He lived, ate and breathed the Heart Attack Grill." And, as he spoke fondly of the 180-pound Alleman, he noted, "Heart attacks aren't a laughing matter. You don't have to be tremendously old or fat. You can be in your 30s and 40s and die of a heart attack." Yet Basso's entire establishment is built around the laughing matter notion that artery-clogging fare is just what the doctor ordered.

On the Heart Attack Grill's menu and merchandise, Alleman is known as "Patient John." As the Grill promises, "We prescribe great tasting high-calorie meals including the Double Bypass Burger, Flatliner Fries, Full Sugar Coke, Butterfat Shake, and no-filter cigarettes!" Last year, the restaurant got into the Guinness Book of World Records for building the "most calorific burger" — a 9,982 calorie tower of meat and cheese that could make Takeru Kobayashi consider vegetarianism. And this, people, is why Mike Bloomberg is not the mayor of Las Vegas.

It's clear that Alleman's deep affection for the restaurant was reciprocated. Last week, Basso vowed to match any contributions that come in to assist in Alleman's medical expenses, and he's decided to close the restaurant for the day of his memorial. But Basso's concern for the well-being of patrons seems to only extend so far. On his Twitter feed, he sounds less than delighted at "how drunk and stupid people can be so early" or with "these two drunk broads from Idaho at my bar." Last year, a diner had what seemed to be "a heart-related problem" while eating a burger there, and a female patron reportedly also had a medical problem during her meal. At the time, Basso, who'd offered free meals to customers who weigh 350 pounds or more, told writer Patrick J. Sauer, "When the ambulance carts them out of here for the first time, they finally have enough extreme shock to realize their shortcomings. One never knows if they're at risk until they have an incident, and if they don't change their behavior patterns, they're going to die. Nobody else will say it, I tell them they're a fat piece of shit." Wow, what a whimsical guy.

Having an unhealthy lifestyle – and eating every day at a place with "Heart Attack" in its name is pretty much as unhealthy as it gets – does not, in fact, make a human being garbage. It just makes that person a pretty typical American. Heart disease is the No. 1 cause of death in this country. It kills more than cancer. It kills more than respiratory disease, stroke, accidents, Alzheimer's and diabetes combined. The Department of Health and Human Services estimates that diet and physical inactivity cause between 310,000 and 580,000 deaths a year.

Alleman lived in an extreme way, but what happened to him happens to millions of us, every single day. And we don't need our fat- and salt-laden American diet to literally be called the Heart Attack on a Plate for it to be just that. And there are surely a lot more interesting and enjoyable ways to feel like living a little dangerously than simply sitting down and consuming. It's not fun. It's not funny. Jon Basso told the Las Vegas Sun this week, "It's just sad when you see poor, poor people end up like this, with a hospital that just wants to pull the plug." And it's just as sad when they wind up there after voluntarily giving their money to a man who is laughing at them, who thinks they're fat pieces of shit.