At 5, Jack is already smarter than I am. How do you give a kid a normal childhood, when his brain is so advanced? 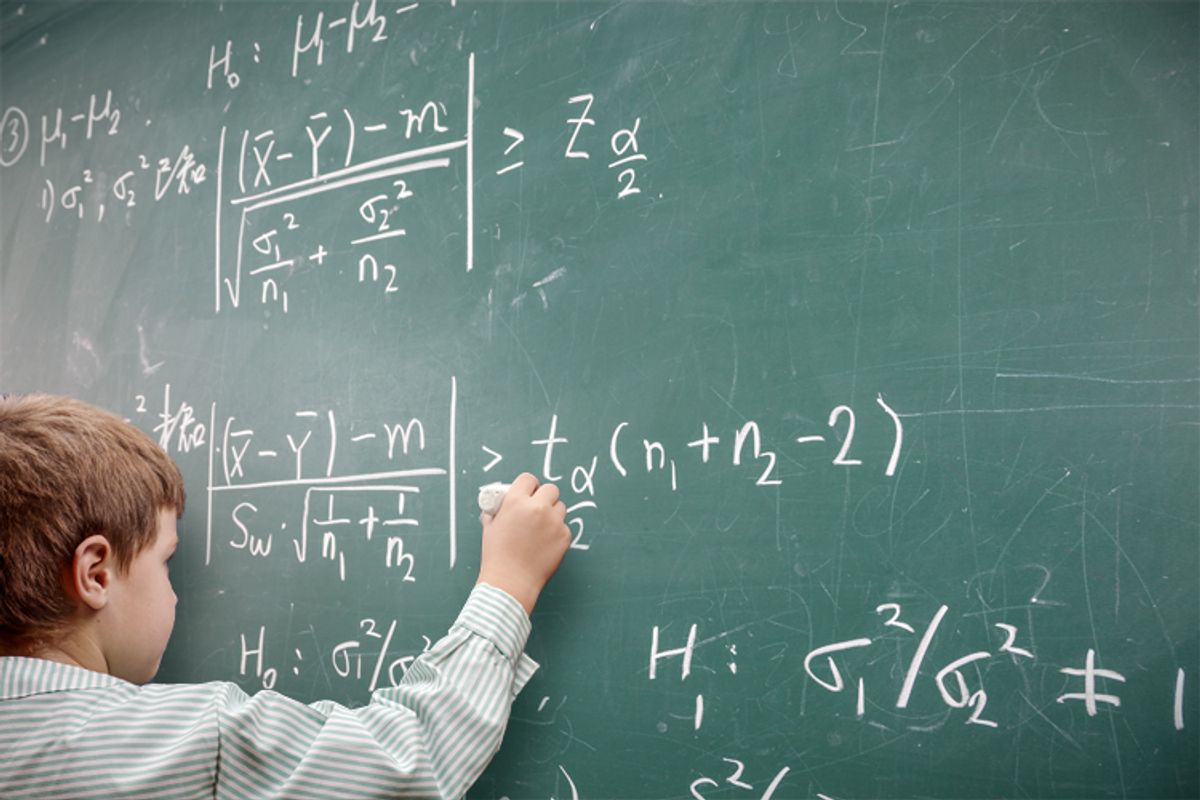 One sunny afternoon this past February, I found myself waiting with my 5-year-old son, Jack, and his friend Oliver outside a lecture hall at Stanford University. We were there to hear about the structure of viruses from one Stephen Harrison, Ph.D. Over the many years my husband and I struggled to conceive a child, I allowed myself plenty of parenting fantasies, but taking a 5-year-old to the 41st Annual Linus Pauling Lecture was not one of them.

Graduate students streamed by us clutching coffee cups. "Finish up,” I chirped to the boys, who were stuffing their mouths with oatmeal cookie. The absurdity of the situation kicked my voice up an octave. “Now, who has to go potty?”

Like a lot of first-timers, my husband, Brian, and I went into parenthood with a plan. Ours was to give Jack an unhurried childhood (though Jack is not his real name). Both teachers, we distrusted the amped-up achievement culture in affluent communities like ours, with its tendency toward high-pressure schools, anxious parents and stressed-out kids. Yes to mud pies and bubbles, we vowed; no to flashcards and Brainy Baby preschools. What mattered was letting Jack figure out what he liked and helping him do that. “I don’t care if he ends up a surfer living out of the back of his van,” Brian said.

It quickly became clear that what Jack liked — no, loved — was academics.

At 2 he refused to leave the library until he had arranged all the giant magnetic letters, upper- and lowercase, in alphabetical order. I practically had to drag him to the playground. At 3 he became obsessed with an educational website called Starfall.com. I doled out computer time sparingly, ambivalent about this new development, until I realized he was teaching himself to read. The year he was 4 we watched him devour every book he could find about U.S. and world geography and after that, astronomy. He still slept in Pull-Ups but could tell you all about black holes, spiral galaxies, red hypergiants and brown dwarves.

People often asked how we “got” him to do these things. I’d smile and shrug, but the question made me uncomfortable. We weren’t pushing him. He was pushing us. Daily, Brian and I exchanged incredulous looks over Jack’s head: Did you hear what he just said? Where did he learn that? A family member put it succinctly. “You know he’s the kind of kid who’s going to go to college at 13, don't you?” We didn’t know. Or else we kind of did, but to admit that went against every egalitarian bone in our bodies. Jack was smart, we told ourselves, but so were a lot of people. He was also just a kid, and what kids needed was time and space to play.

Play-based preschool was a no-brainer, and the one we found felt like Shangri-La to us, with its wooden toys, huge sand pit, and vast green yard to explore. It was perfect, except that Jack hated it. At pickup, I’d find him pacing alone under the trees, talking to himself, dark circles under his eyes. The hippie kindergarten, with its emphasis on yoga and meditation, was no better. After a few months, Jack curled himself into a naked ball, wouldn’t get dressed for school. He developed insomnia and an array of nervous tics. Our funny, upbeat boy was fading before our eyes. “When are they going to teach me something I don’t already know?” he pleaded.

Finally we hired a silver-haired woman to assess Jack. She confirmed what we had begun to suspect: Jack was more than just smart. The term of art is “profoundly gifted.” The last thing you want to do with kids like these, she said, is to try and hold them back. Mental challenge is their oxygen. Confirming the true extent of Jack’s intellectual potential was simultaneously thrilling and terrifying, validating both our secret pride and a long list of worries: his anxiety, his difficulty making friends, his out-and-out difference from other kids. The news sent my parental compass spinning. Slower-is-better had been our true north. Now I didn’t know which way to go.

The silver-haired woman connected us with Oliver, another little boy in the neighborhood fluent in supernovas and subatomic particles. His mom, Kristen, and I set up weekly play dates, thrilled to find someone else in the same boat. The boys bonded immediately, rolling Play-Doh into comets and neutron stars while Kristen and I compared notes. They, too, had once tried to slow Oliver down, limiting his access to certain subjects for fear he was becoming obsessed. Like Jack, he’d responded by shutting down. These days she followed his lead, helping him pursue his many interests from origami to quarks to viruses. “I don’t want to keep him from learning opportunities just because they’re not age-appropriate,” she said in her levelheaded way.

Having stepped through the looking glass, this no longer sounded like sacrilege. I, too, was through with holding Jack back in the name of protecting him. But the Linus Pauling Lecture? It was Kristen’s idea, and I wasn’t at all sure. It seemed vaguely ridiculous to take two kindergartners to a lecture meant for adults, no matter how bright they were. “Open to the public” couldn’t possibly mean us.

I’m still not quite sure why I said yes. Maybe it was my reluctance to make waves in a new friendship. Maybe it was the simple desire for something different to do on an ordinary Tuesday. And maybe a genuine question was beginning to shake loose from all my former certainties. What did Jack really need? Did I even have any clue?

On the day of the lecture, Kristen’s baby sitter canceled, and she had to stay home with Oliver’s little brothers. I was on my own, banking on a big, dark lecture hall where a kooky lady with two 5-year-olds wouldn’t be quite so conspicuous. No such luck. The auditorium was tiny, the lights bright. As soon as we walked in, I could feel my face heating up. “This way, guys,” I whispered, hunching down the aisle. There were only two seats left together, down in the third row.

A bearded man at the podium was detailing Dr. Harrison’s curriculum vitae. I sat us down quickly and pulled Jack onto my lap, afraid to look to either side. Jack began kicking the seat in front of him and flinging his arms out to the sides. “Is this the lecture?” he asked in a loud whisper.

“Shhh,” I said, wrapping my arms around him straitjacket-style. This was a bad idea.

Oliver’s voice was equally loud. “They are going to turn the lights off and then they are going to have slides.” It seemed odd that no one around us was glaring — or even glancing — our way.

At last the room darkened and what looked like multicolored Koosh balls appeared on an overhead screen. The boys craned their necks to read words like "icosahedral" and "nanomachines." Their bodies went utterly still.

“This structure,” Dr. Harrison pointed to a swoopy pattern of elegantly intertwined green strings, “is called the jelly roll Beta barrel.” Oliver’s eyes were locked on the screen.

“This lecture is great!” Jack called out, bucking on my lap. “It’s so interesting!” I was stunned. He really meant it. A few minutes later, he started flinging both arms up in the air over and over again, brushing me on either side of head. I pulled his arms down again and again.

“Jack, stop,” I finally hissed. It was time to go.

“Mo-om,” he complained in a loud, injured voice. “I was trying to hug you.” And then I got it. He was feeling grateful. The fact that I’d brought him here made him feel understood.

In the lobby on the way out, a stocky Asian man stopped us. Uh-oh, I thought. Here it comes. But his face was friendly, his voice a bit nervous. “Can I ask why you brought the kids today?” he said.

“Well,” I said, not sure how much to reveal. “They’re very bright, and this one,” I gestured at Oliver, “is especially interested in viruses.” A few feet away, Jack was making a pig face by pressing his nose against a glass door.

He was thinking of starting a school, he said, for children to work on Nobel problems. He scribbled his email on a scrap of paper. Anxiety rose off him like steam. I took it and thanked him, my head spinning.

Outside, the air was a huge relief. The boys broke into a run, chasing each other across the grass. “Jelly roll Beta barrel!” Oliver yelled, and Jack yelled it back. He seemed as happy as I'd ever seen him.

I was still holding the man’s number. I didn’t plan to call. Whatever was in our future, I doubted it was his Nobel school, though in my hand the slip of paper felt like a ticket, one for a journey I’d never imagined.

As for the needle on my compass, it had started to shift. No longer could I find my way with theories and plans.

The way forward was uncertain, the future unclear. Only one thing was sure: True north was this boy I loved, now drunk on higher learning and rolling with his friend on the green, green grass.

Thea Sullivan is a writer and creative writing instructor whose work has previously appeared in many literary journals, including The Sun magazine.  She never dreamed she'd homeschool her son.  Now she's doing just that -- and writing about it, in a memoir and her blog.
MORE FROM Thea Sullivan