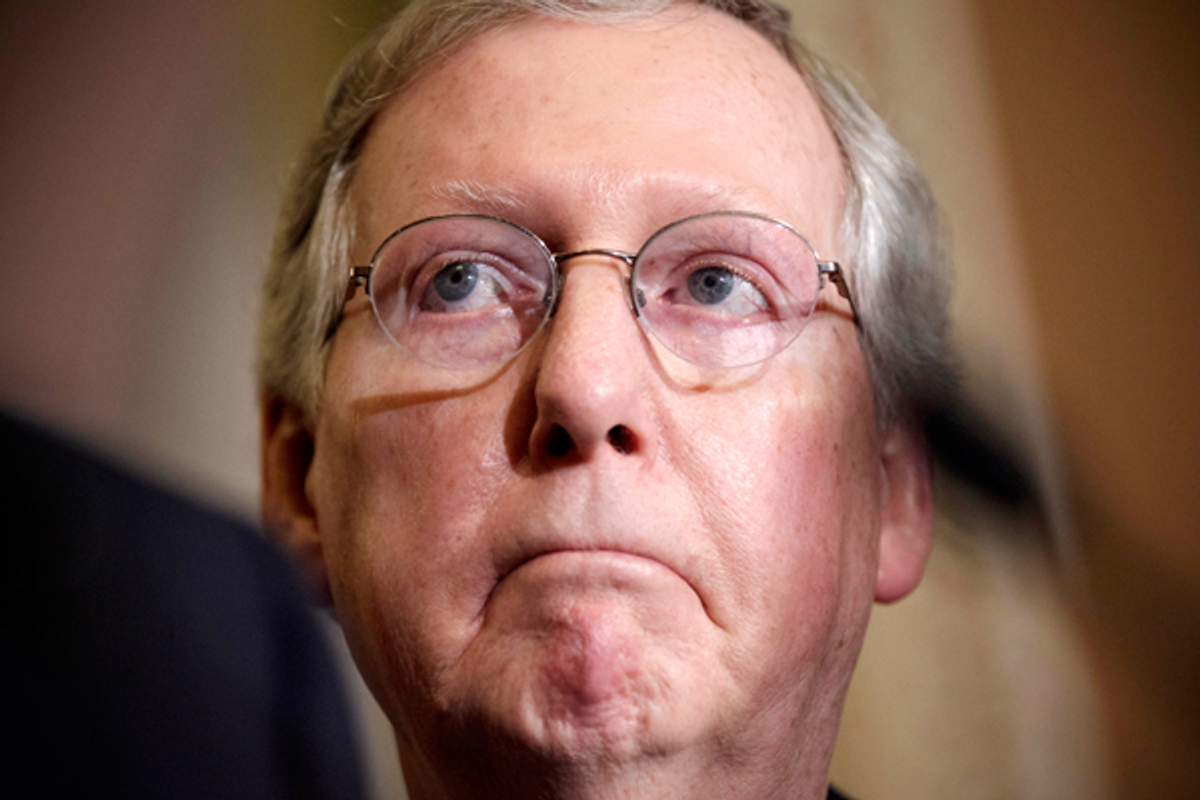 There’s no chance of passage so why are Republicans pushing it now? “Just because something may not pass doesn’t mean that the American people don’t expect us to stand up and be counted for the things that we believe in,” says McConnnell.

The more honest explanation is that a fight over a balanced-budget amendment could get the GOP back on the same page — reuniting Republican government-haters with the Party’s fiscal conservatives. And it could change the subject away from  social issues — women’s reproductive rights, immigration, gay marriage – that have split the Party and cost it many votes.

It also gives the Party something to be for, in contrast to the upcoming fights in which its members will be voting against compromises to avoid the next fiscal cliff, continue funding the government, and raising the debt ceiling.

Perhaps most importantly, it advances the Republican’s biggest economic lie – that the budget deficit is “the transcendent issue of our time,” in McConnell’s words, and that balancing the budget will solve America’s economic problems.

Big lies can do great damage in a democracy. This one could help Republicans in their coming showdowns. But it could keep the economy in first gear for years, right up through the 2014 midterm elections, maybe all the way to the next presidential election.

Perhaps this has occurred to McConnell and other Republicans.

Here’s the truth: After the housing bubble burst, American consumers had to pull in their belts so tightly that consumption plummeted – which in turn fueled unemployment. Consumer spending accounts for 70 percent of economic activity in the U.S. No business can keep people employed without enough customers, and none will hire people back until consumers return.

That meant government had to step in as consumer of last resort – which it did, but not enough to make up for the gaping shortfall in consumer demand.

The result has been one of the most anemic recoveries on record. In the three years after the Great Recession ended, economic growth averaged only 2.2 percent per year. In the last quarter of 2012 the economy contracted. Almost no one believes it will grow much more than 2 percent this year.

Not this time. Unemployment is still sky high. The current official rate of 7.9 percent doesn’t include 8 million people (5.6 percent of the workforce) working part-time who’d rather be working full time. Nor those too discouraged even to look for work. The ratio of workers to non-workers in the adult population is lower than any time in the last thirty years – and that’s hardly explained by boomer retirements.

Wages continue to drop because the only way many Americans can find (or keep) jobs is by settling for lower pay. Most new jobs created since the depth of the Great Recession pay less than the jobs that were lost. That’s why the real median wage is now 8 percent below what it was in 2000

Republicans who say the budget deficit is responsible for this are living on another planet. Consumers still don’t have the jobs and wages, nor ability to borrow, they had before the recession. So their belts are still tight. To make matters worse, the temporary cut in Social Security taxes ended January 1, subtracting an additional $1,000 from the typical American paycheck. Sales taxes are increasing in many states.

Under these circumstances, government deficits are not a problem. To the contrary, they’re now essential. (Yes, we have to bring down the long-term deficit, but that’s mostly a matter of reining in rising healthcare costs – which, incidentally, are beginning to slow.)

If Republicans paid attention they’d see how fast the deficit is already shrinking. It was 8.7 percent of the Gross Domestic Product in 2011. The Congressional Budget Office forecasts it will shrivel to 5.3 percent by the end of 2013 if we go over the fiscal cliff on March 1 — and some $85 billion is cut from this year’s federal budget. Even if March’s fiscal cliff is avoided, the CBO expects the deficit to shrink to 5.5 percent of the GDP, in light of deficit reduction already scheduled to occur.

This is not something to celebrate. It translates into a significant drop in demand, with nothing to pick up the slack.

Look what happened in the fourth quarter of 2012. The economy contracted, largely because of a precipitous drop in defense spending. That may have been an anomaly; no one expects the economy to contract in the first quarter of 2013. But you’d be foolish to rule out a recession later this year.