Rubio’s charm has its limits 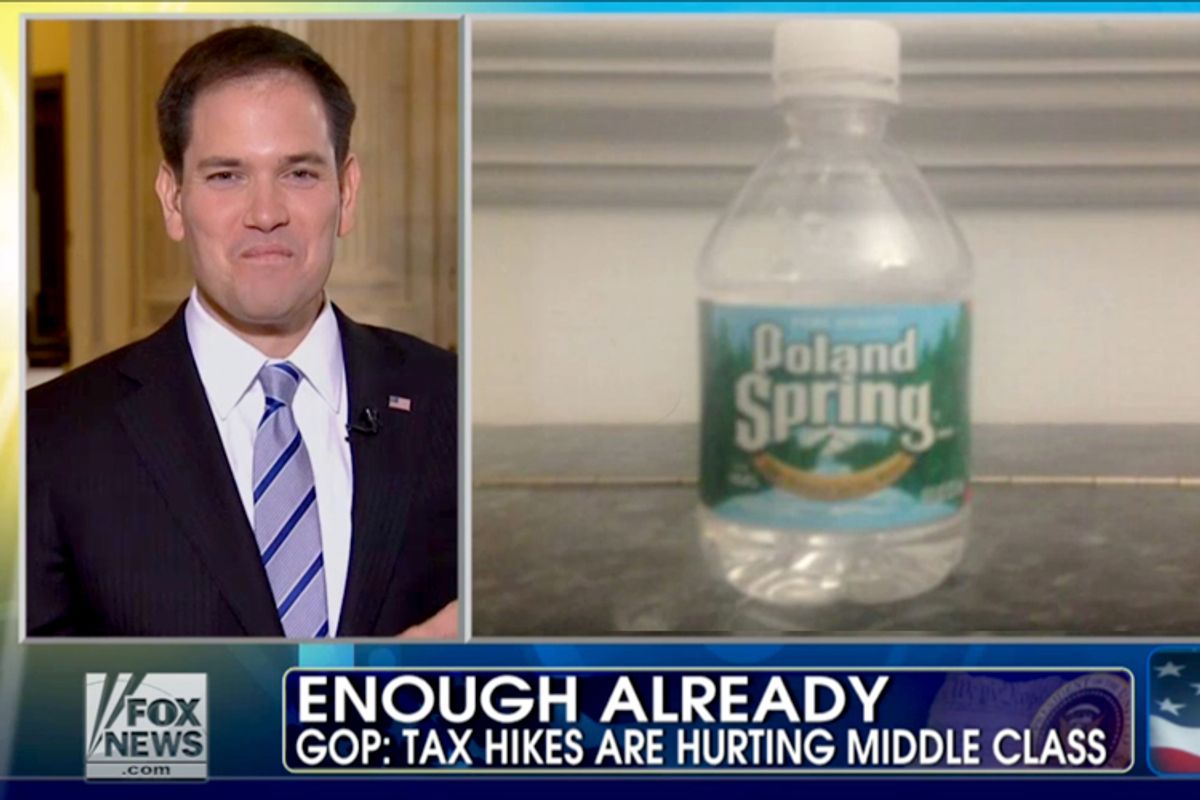 Sen. Marco Rubio charmed the morning shows Wednesday, making light of his Big Gulp moment during his State of the Union rebuttal. “I needed water, what am I going to do?” he told ABC’s “Good Morning America,” with a winning chuckle. “God has a funny way of reminding us we’re human.” Rubio showed a little bit of the personality that led Republican leaders, but most important, the media, to declare him “the Republican savior,” in the embarrassing words of Time magazine. (Embarrassing for Time magazine, I mean.)

The contrarian in me wanted to minimize Rubio’s sad grope for water. Just as my friend Michael Tomasky empathized with the president last week on the tough issue of drone policy, I empathized with Rubio: I’m always looking for ways to unobtrusively slip in a sip of water while speaking. So I wouldn’t cast the first stone at the Florida senator for his case of dry mouth.

But Rubio’s thirsty moment is going to shadow him now, and with reason: It was another example of  how unready he is to lead the party – on everything from the small details of stagecraft to the boldness of head and heart that will be required to move the GOP away from pandering to anxious white voters with an opportunity agenda for everyone. Even as Sen. Rand Paul’s Tea Party rebuttal seemed to indicate a rift within the party’s right wing, setting up Rubio to be the moderate, Rubio’s own speech showed that he’s still well within the realm of the wingnuts.

That Rubio chose to be one of only 22 senators to vote against reauthorizing the Violence Against Women Act (let’s note that 23 Republicans voted for the bill) on the same day he was being anointed his party’s future shows how he’s colluding in the bait and switch GOP leaders are trying to pull off. They want to stop repelling women and minority voters with sweet talk, while continuing the backward policies that got them into trouble with those groups in the first place.

Likewise, Rubio continues to stress border enforcement even as he pretties up the GOP message on immigration, ignoring how much Obama has strengthened the border not merely with more guards and security measures but by deporting those who’ve made it past them.

But even Rubio’s mild apostasies on immigration show how little he’s prepared to tackle the GOP’s big problem with women, Latinos, Asians, African-Americans and young voters: The emerging electorate favors a bigger role for government in helping people rise. They don’t thrill to the language of “job creators” and government bashing the way most older whites do.

Again, Rubio at least tried to deal with that problem superficially. In his SOTU rebuttal, he told a story of how government helped his family, with college loans in his own youth and with Medicare for his parents. Yet he’s fronting policies that would cut back those programs, and even his rhetoric offered no new vision of how his party would help the non-rich, except to give the rich more money to maybe try to help them.

In the end, Rubio looked like a child pretending to be an important politician, and his ideas weren't any more impressive than his amateur delivery. Why are Republicans acting like he's their savior anyway? Is it the fault of the media yearning to have anything positive or new to write about the party? It’s tough, I guess, to be judged "fair" to the party and nonetheless write honestly about its utter dearth of new ideas and genuine new leadership. But if I were a Republican, I’d be furious at the lamestream media for anointing Rubio my future.

The conspiracy theorist in me even wondered: could someone in the party be sabotaging young non-white "talent" like Rubio and Gov. Bobby Jindal, throwing them into the coliseum before they're ready? But in both cases, the men in question gulped down the flattery and grabbed opportunity, so it’s condescending to see them as mere pawns of the power structure. Jindal has had three years to remake himself after his disastrous SOTU moment, and the best he could do was last month’s speech declaring that the GOP should stop being “the stupid party,” which was itself, well, not so smart.

Like Jindal, Rubio is peddling 19th century policies with a 21st century surname. Even his charming round of the morning shows won’t counter the effect of his unimpressive national debut.