When John Boehner just sat there 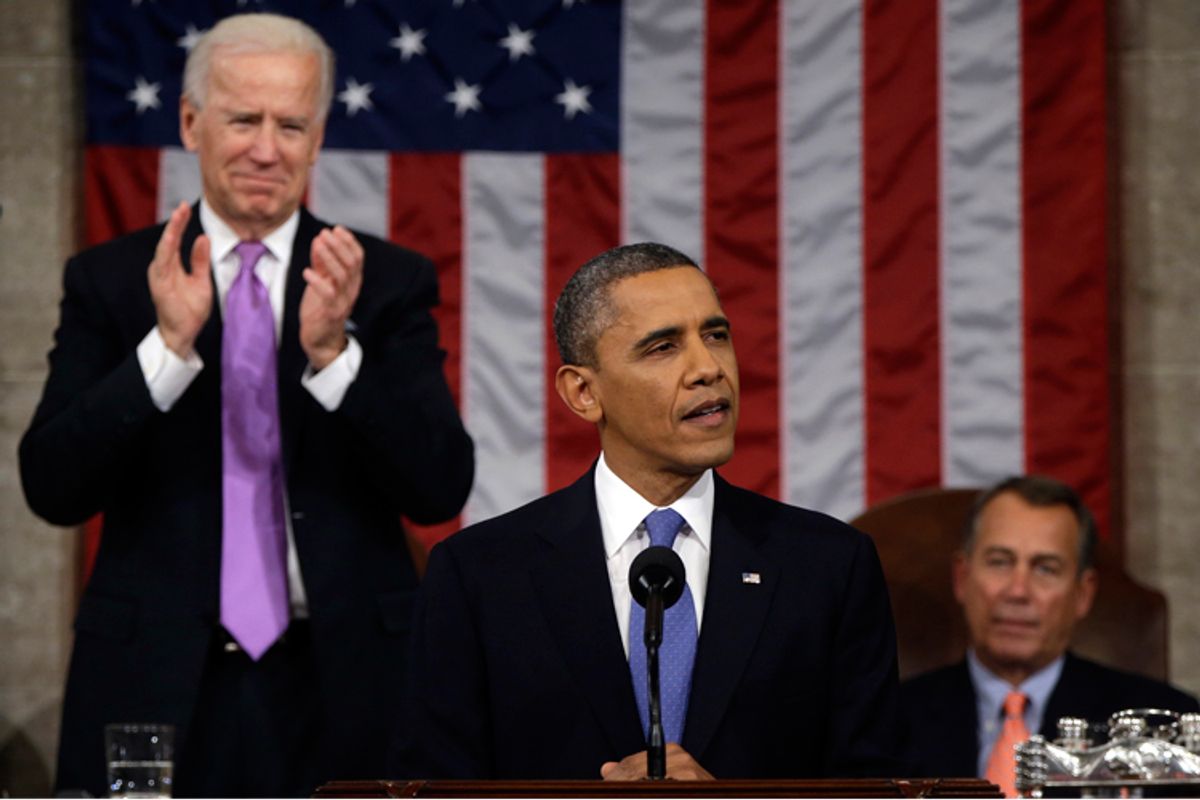 President Obama’s State of the Union speech showed that the progressive energy of his second inaugural address wasn’t just a man getting carried away by the moment. On Tuesday night, he outlined an ambitious second-term agenda: a commitment to universal preschool, raising the federal minimum wage, executive action on climate change, a strong jobs agenda, easing barriers to voting, tough new gun laws. The president won’t get everything he’s asking for, not even most of it, and some of the details of what he wants and how he’ll achieve it were sketchy, but it was rewarding to see him ask.

And while Obama talked deficit reduction early in the speech, it was much less detailed and central than in most of his other big national speeches. “Deficit reduction alone is not an economic plan,” he said, stating what should be obvious, but often isn’t inside the Beltway. He even went partway toward greater accountability on his controversial drone program – although he didn’t use the word "drones" – promising to work with Congress on oversight and transparency. Not enough, but a start.

But the heart of the speech came during his remarks on gun violence. Legislators wore green ribbons to remember the victims of Newtown, but Obama made sure that the victims of violence in urban neighborhoods had their moment here.

He introduced the parents of 15-year-old Hadiya Pendleton, the majorette who was shot in a Chicago park just a mile from Obama’s home. “Just three weeks ago she was here with her classmates, performing at my inauguration,” he said, describing a girl who loved Fig Newtons and her friends. He urged Congress to back gun control legislation for Hadiya’s parents, Nate and Cleo, “along with two dozen other Americans whose lives have been torn apart by gun violence.”

“They deserve a vote,” he said three times, and went on:

The families of Newtown deserve a vote.

The families of Aurora deserve a vote.

The families of Oak Creek, and Tucson, and Blacksburg, and the countless other communities ripped open by gun violence – they deserve a simple vote.

That brought almost all members of Congress to their feet, but it was remarkable how little Republicans clapped during most of the speech, even anodyne bipartisan high points. When Obama asked them to give up their debt-ceiling hostage taking -- "Let’s agree, right here, right now, to keep the people’s government open, pay our bills on time, and always uphold the full faith and credit of the United States of America,” he told them – House Speaker John Boehner sat without clapping, and so did most of the GOP. When he nodded to Sen. John McCain’s climate change legislation, McCain half-smiled, or half-grimaced like he was experiencing gas.

But Boehner’s disdain was unrivaled. He also managed not to rise even for a shout-out to “wounded warriors,” or 102-year-old Deseline Victor, who waited seven hours to vote in Miami on Election Day. It was sometimes hilarious to watch him next to Vice President Joe Biden, who looked like a happy Easter Bunny with his white hair, lavender tie, pink-tinted glasses and green Newtown ribbon. Biden seemed to occasionally enjoy standing up, clapping while looking down at Boehner sulking in his chair.

I was happiest to see the president call for raising the minimum wage to $9, higher than in any state but Washington, and for universal preschool education. He left out details about how he’ll get there, and it will be both expensive and bureaucratically challenging, navigating the thicket of existing programs, from Head Start to state pre-kindergarten programs to community-based organizations, but it’s time to begin.

State of the Union addresses are usually just blueprints for projects that rarely get built. Many of the ideas in the speech, particularly on jobs and infrastructure, have been proposed before, and without congressional support, they won’t be accomplished this year either.

Still, it was great to see Obama commit himself to a more explicit opportunity agenda, addressing “inescapable pockets of poverty, urban and rural, where young adults are still fighting for their first job” and promising to “put people back to work rebuilding vacant homes in run-down neighborhoods.”  It was important to hear him link climate change to extreme weather, from Hurricane Sandy to wind storms to drought, and the fact that “12 of the hottest years on record have come in the last 15 years.” I look forward to seeing the “executive actions” he promised if Congress didn’t act on climate change, because this Congress won’t act.

Maybe most important, he didn’t use the address to make another call for a “grand bargain” to avert either sequester cuts or a future government shutdown or debt-ceiling crisis, as had been suggested. He didn’t commit to disturbing Social Security cuts like chained CPI. And while we need more details on his vague reference to making “wealthy seniors pay more” for Medicare, since it could involve a regressive form of means-testing, he didn’t use this moment to rally the country behind benefit cuts.

On guns, Obama seemed resigned to only getting part of his agenda, but it’s important that he continues to demand a vote on all of it. OK, so insisting “Each of these proposals deserves a vote in Congress. If you want to vote no, that’s your choice” may not be the approach of the toughest political boss, but on guns, it’s progress, when leaders of both parties scheme to keep popular measures from coming to a vote. Obama seemed to be arguing with absolutists in both camps when he remarked, “We were never sent here to be perfect. We were sent here to make what difference we can.”