Who gains from Rand Paul's speech?

One reason to have a Tea Party SOTU response: $$$ 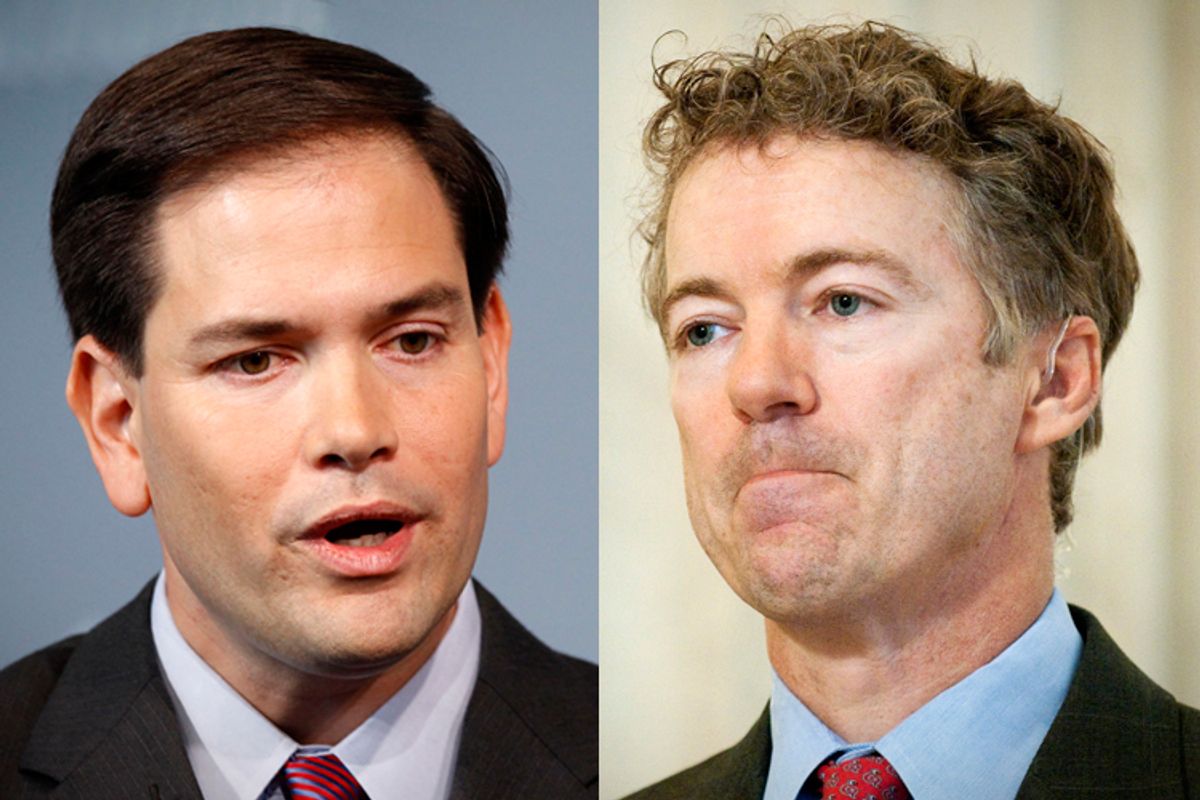 Why does the Tea Party need its own response? It probably doesn’t, considering that the official Republican responder is Florida Republican Sen. Marco Rubio, who won a primary against a more establishment Republican thanks to the backing of the Tea Party. But the movement is not a unified group, as they often like to remind the press. Even if the response does nothing for the conservative grass roots movement, it makes perfect sense for those actually involved in it.

The response is organized by Tea Party Express, as it has been for the past three years (Rep. Michele Bachmann gave the first Tea Party response, when she famously failed to make eye contact with the camera). Tea Party Express bills itself as “the nation’s largest tea party political action committee.” This is a little odd, considering it’s not a PAC at all. In fact, as a disclaimer at the bottom of its website and all ads says, Tea Party Express is a brand of a real PAC called Our Country Deserves Better, which is in turn controlled by the Sacramento, Calif.-based GOP P.R. firm Russo Marsh + Rogers.

Like so many people involved in the Tea Party, Russo Marsh + Rogers saw an opportunity to cash in on the Tea Party movement and has done so adroitly, hitting up its members for small donations with incessant email solicitations, often from its numerous associated brands like “the Campaign to Defeat Barack Obama,” which help the effort present a broader image.

The PACs started by Russo Marsh + Rogers then take much of the money they raise and -- this is where it gets clever -- use that money to pay Russo Marsh + Rogers huge consulting fees. The P.R. firm was both the No. 1 and 2 recipients of cash from Tea Party Express in the 2012 cycle, taking in almost $3 million, while the Campaign to Defeat Barack Obama gave Russo Marsh + Rogers another $336,0000 (its third largest expenditure).

This is all by way of saying that Tea Party Express has very real incentives to remain relevant and present itself as speaking on behalf of the Tea Party movement.

The story is largely the same for Rand Paul, who is trying to take up the mantle left by his father, former Texas Republican Rep. Ron Paul, to lead a national libertarian grass roots movement that sometimes aligns itself with the Tea Party. Giving the “official” Tea Party Response lets Paul present himself as a leader of the movement and boost his cache with activists and the media.

So even if the Tea Party movement as a whole gains little from having a Tea Party response to the State of the Union on top of Rubio's, Tea Party Express and Rand Paul certainly do, and the media is only too happy to play along, as it creates interesting GOP civil war drama and is another thing to write about.

So, what did Rand Paul actually say? Most of it was anodyne conservative talking points, very similar to what Rubio offered.

“Presidents in both parties -- from John F. Kennedy to Ronald Reagan -- have known that our free enterprise economy is the source of our middle-class prosperity. But President Obama? He believes it’s the cause of our problems ... You heard tonight, [Obama’s] solution to virtually every problem we face is for Washington to tax more, borrow more and spend more,” Rubio said.

“But we won’t be able to sustain a vibrant middle class unless we solve our debt problem,” Rubio said.

“The [debt] path we are on is not sustainable, but few in Congress or in this administration seem to recognize that their actions are endangering the prosperity of this great nation,” Paul said.

But Rand Paul did break from Rubio in one major place -- defense cuts. Congress is currently trying to head off the so-called sequestration, which will slash half a trillion dollars from the Pentagon. Republicans want to stop that, but Rand Paul doesn't.

"Not only should the sequester stand, many pundits say the sequester really needs to be at least $4 trillion to avoid another downgrade of America's credit rating," Paul said tonight.

He also had some stronger rhetoric on immigration than Rubio. Despite being the GOP’s go-to guy on immigration, the Florida senator gave the issue barely a nod: Three sentences, one paragraph, and no specifics. He spent more time talking about his own biography and railing against Obama’s nonexistent plan to hike taxes.

The thing is, it’s hard to say if Paul is really speaking on behalf of the Tea Party here, or just his own idiosyncratic beliefs. There is strong widespread bipartisan belief that the sequester is bad and Rand Paul is likely the only member in the Senate who wholeheartedly supports it, let alone wants to go further.

While some polling suggests Tea Party members agree with Paul on defense cuts, he is at odds on immigration with the grass roots, which tend to be more restrictive than the elites. While the movement presented itself as something entirely new, it is largely just made up of the most committed conservative activists, and they seem to really care about fighting “amnesty.”

So the question is: Was Rand Paul’s speech the Tea Party response, or merely the Rand Paul response? Either way, it was a coup for Russo Marsh + Rogers.