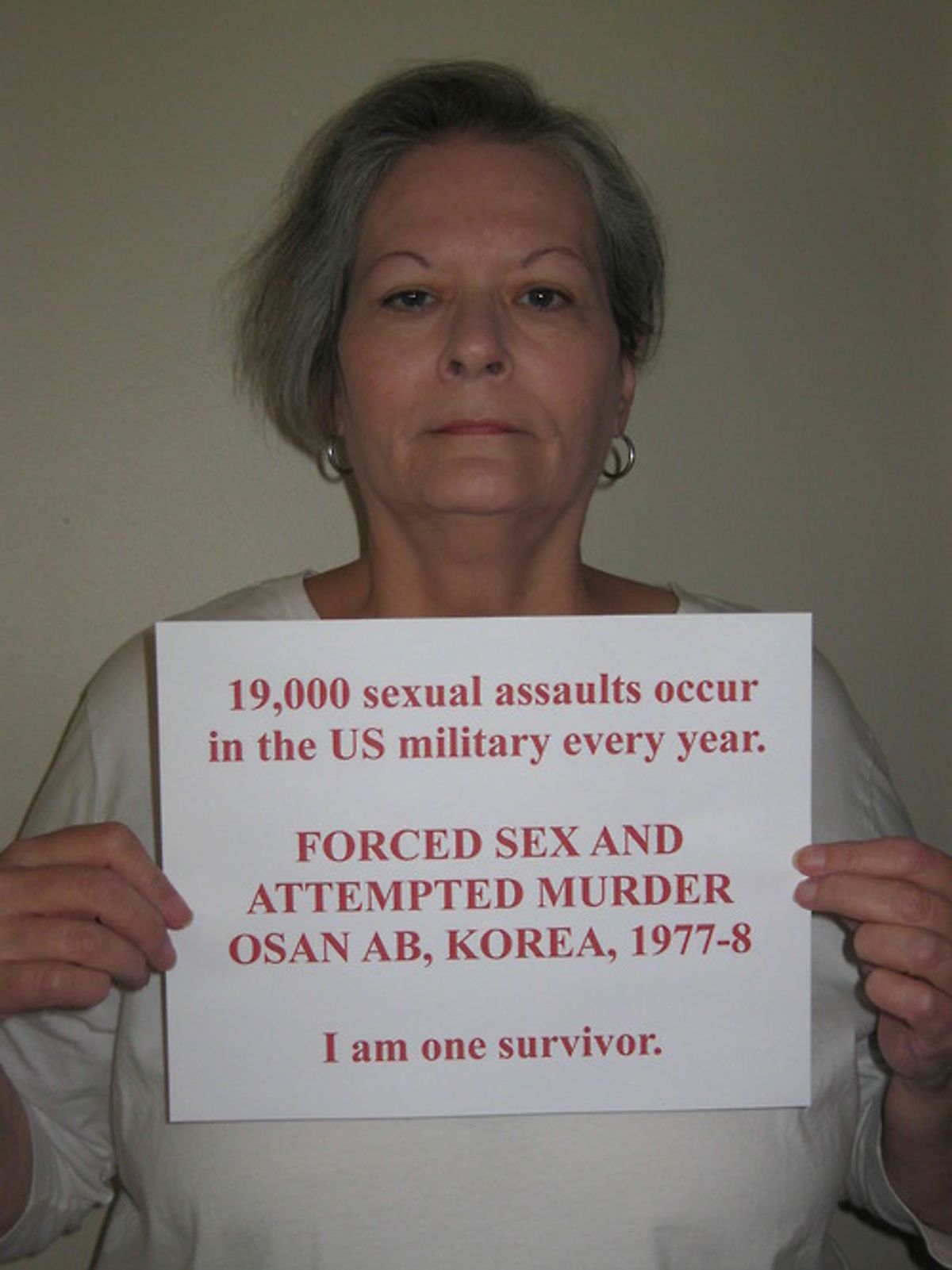 According to military statistics, there were 3,191 reports of sexual trauma in 2011. But experts, including Defense Secretary Leon Panetta, believe that because these assaults are grossly underreported, there were actually as many as 19,000 - 22,000 sex crimes in the military that year.

The women (and some men) who were raped or sexually assaulted by fellow service members are often faced with field commanders, as well as a Pentagon and Department of Veterans Affairs, who refuse to recognize their claims, provide treatment or prosecute the offenders.

But now survivors of sexual assault in the military are speaking out, putting a human face to a silent epidemic.

In addition to an Oscar nod for “The Invisible War,” a documentary on the pervasive culture of sexual abuse in the military, a viral campaign "I Am One" is documenting the personal experiences of women survivors.

The stories reveal not only the initial trauma of sexual abuse, but the subsequent trauma of an indifferent military culture. They are stunning, brave and heartbreaking.

"I was sodomized and raped as a young Marine in 1981. Too ashamed to tell I spent almost 30 years living with the secret. After being hospitalized for a suicide attempt in 2010, I finally told someone and began treatment for PTSD caused by MST [military sexual trauma]. But my claim has been turned down once and now sits in limbo. Because I didn’t come forward when it happened, I can’t prove it, but I can sure prove the horrible aftermath of what it has done to my life."

“I am a MST survivor and had to fight for 4 years to get a rating and another 3 years of fighting to get my 100 percent rating. MST survivors should not have to fight harder for their VA benefits just because they were raped.”

“I too, am a survivor.  It took me over 3 years before I could tell my story, so much shame and so much conflict within myself. I would hope that our government can support Ruth [Moore, a survivor and namesake of the Ruth Moore Act of 2013 for victims of military sexual trauma] and congratulate her for being brave and coming forth instead of suffering in silence.  We can no longer coward in shame, we must speak up if we wish to begin healing, if we wish to survive!”

The lack of accountability for the women who serve this country has already gone on too long, but their willingness to speak out is raising the public profile of sexual trauma in the armed services -- and military officials and politicians are taking notice.

A report from the Defense Department on sexual assaults in the military called the prevalence of sexual violence “an affront to the basic American values we defend and may degrade military readiness, subvert strategic goodwill and forever change the lives of victims and their families.” And lawmakers have introduced the Ruth Moore Act of 2013, named for a Navy veteran who struggled with homelessness and depression after being raped, twice, while serving in the military.

If passed, the bill could make it easier for veterans to receive benefits for mental health problems linked to military sexual trauma, providing a lifeline for the many women who struggle to rebuild after surviving much, much more than a war.