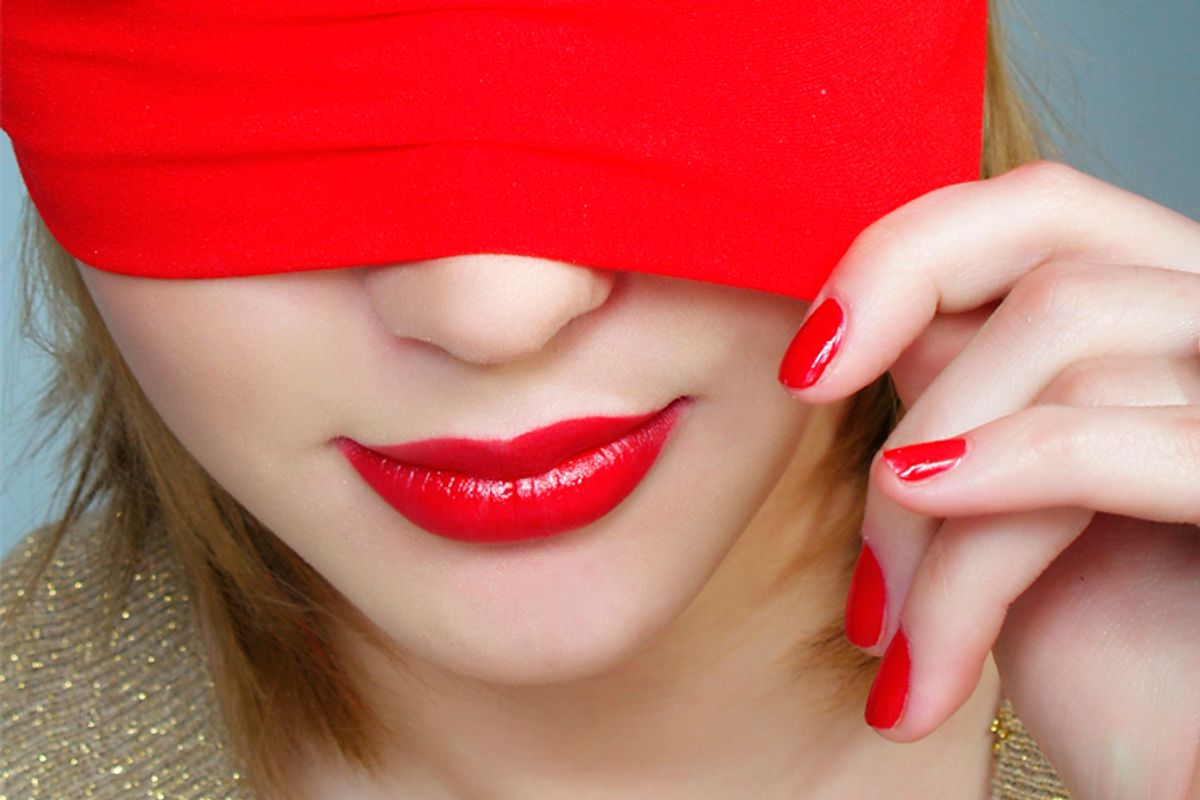 Dating sites like OKCupid talk up their math-based matchmaking systems, but no one thinks a few algorithms and questionnaires can foment love. Sure, it’s nice when your partner is as into “A Song of Ice and Fire” as you are. But shared hobbies and interests can’t predict love, chemistry, or even if you can tolerate hanging out with someone for more than five minutes .

With the launch of Crazy Blind Date, an app that randomly sets users up based on demographic information, OKCupid seems to be throwing up its hands and admitting that when it comes to finding love, shared tastes can only take you so far. The app works like this: you pick a time and a location, and OKCupid pulls up a list of potential dates in the area, along with their first names, ages and scrambled photos of their faces. You pick one, and let Eros (or booze) do the rest.

As someone who appreciates serendipity (or at least the 2001 John Cusack film version), I wanted to see whether the app represented a brand-new, profile-browsing and questionnaire-free frontier in the world of online dating. Yet when I told my friends I was testing out the app, the response overwhelmingly skewed pessimistic. “You’re going to be rape/murdered,” one told me. This was followed by the almost equally unnerving possibility of being “set up with someone you went to Hebrew school with.”

Online, the response to Crazy Blind Date was just as negative. “I would worry this attracts a certain type of person," a commenter on Jezebel wrote. "Namely, the kind that wants to serial date, but isn't attractive enough to get serial dates: the creepy, sleazy, and ugly.”

I forged on. Armed with a brand-new OKCupid account and the blessing of my long-term boyfriend, I downloaded the app and began shopping for a soul mate.

The app prompted me to enter a time and place to meet. I selected 7:30 Saturday at my favorite bar in midtown, which has dollar beers and free hot dogs. OKCupid pulled up four date options but none liked my bar choice: instead, they leaned toward places in the financial district. Their idea of a romantic evening seemed to be downing $12 Jello shots with surgically enhanced waitresses and mine is puking up collagen-encased pig intestines in a graffitied bathroom. Not a promising start.

Eventually I scheduled three dates: Carlos on Saturday, Neil on Sunday, and Joshua on Monday (not their real names). For a brief, fleeting moment, I felt sexually omnipotent. Like the Fonz, I could snap my fingers and have a gaggle of scrambly-faced males at my disposal.

After setting up, the messaging commenced. I received my first message from Carlos a few minutes after we arranged our date. It was innocuous enough — confirming for Saturday — but the signoff, “Good night and sweet dreams,” raised immediate red flags. From a stranger, “good night and sweet dreams” is as creepy as your grandfather saying the word “panties.”

Carlos and I met at a pub on the Upper West Side. Short and slight, he was waiting outside when I arrived with close-cropped dark hair and a Cupid's-bow mouth. The first thing he said was, “You look different from your picture.” It was a ridiculous thing to say since he’d only seen a scrambled version of my face, but I just smiled and didn’t say anything.

It was loud in the bar, and Carlos had a somewhat heavy accent, so it was hard to understanding some of what he was saying. But after a few minutes, I learned that he was a baker and college student from Queens, who’d moved to the States from the Dominican Republic. Though he seemed slightly uncomfortable, his conversational skills were first-rate compared to mine. Having not been on a date in years, I was so nervous that I mostly nodded and asked dumb questions about making pumpernickel bread.

Carlos was polite and ambitious, but we didn’t have much to talk about. I found myself wondering if the drinkers around us were flashing each other knowing, “those-idiots-are-on-a-blind-date” winks as we exchanged stilted pleasantries about siblings and favorite types of bread. When he asked me if I was looking for a friendship or something more, I became flustered and blurted out, “I’m just looking for a – you know – I’m just here for the hang.” He stared at me with a pitying half-smile before he dropped me off at the subway, leaving me wondering if I could do this twice more.

On Sunday, Neil told me to meet him at a wine bar on the Lower East Side. I arrived a little early, and was pleased when a cute, bespectacled, swarthy dude sat next to me. Again, the first thing he said was that I looked nothing like my picture.

We downed our respective glasses of sherry and Riesling and Neil told his story: He was a software engineer at an apparel company who had studied engineering at a large state school in the South. He was nerdy and self-deprecating, but in an endearing rather than grating way. “I think I’d do pretty well in a meth lab,” he joked while we were talking about “Breaking Bad.” “They’d think I was totally uncool, but I’m a scientist at heart, so I’d be like, ‘Hey, how do you guys make this stuff?’ and I’d earn their trust that way.” I laughed. I couldn't imagine this hip, well-educated 20-something walking around a trailer, lecturing about chemical compounds to a group of unsmiling meth-heads.

Neil was smart, quick and earnest without being cloying. He didn’t display any of the douchier-than-thou affectations I’d seen on dozens of OKCupid profiles — the shirtless profile pics, the humble-brags about speaking five different languages. Yet the conversation thudded to a halt after I drunkenly told him not to “quote me” on something I said. “Oh, so I see what you’re doing, you’re just doing this for the story so you can get clicks,” he said.

I froze. Having briefly forgotten that I was not in the market for the same thing that he was, the sherry flush drained from my cheeks. I felt creepy and awful.

Next up was Joshua, who didn’t greet me by saying I looked like my profile. He did, however, look familiar. Wait, did we go to Hebrew school together?

No, but he did attend a Jewish school not far from where I grew up. He reminded me of every dude I’d had a crush on at summer camp, the wide-eyed, sandy-haired, athletic Jewish kids who wore Livestrong bracelets and made fun of flat-chested girls.

Of the three dates, I probably had the most in common with Joshua: we were both tri-state area Jews who liked cheap beer, the History Channel, and arguing loudly about prison reform. OKCupid probably would’ve given us a high match rating on the basis of that alone. What we did not have in common was politics. He described himself as a centrist, summing up his views: “My conservative friends think I’m liberal, and my liberal friends think I’m a neoconservative.” He also asked at one point if I was a “feminist, like a plant-your-flag-in-the-ground radical feminist or a woman who believes men and women should be treated equally.”

I had fun with Joshua, and not just because we spent a good half of our date talking about sociopathy and good places in the city that sell oysters, two of my favorite topics. He was exactly the kind of person you’d want to be set up with on a blind date: easygoing, amiable and decidedly non-murdery. He also had a sense of humor about OKCupid, which he’d joined a few days ago at the urging of his roommate.

“Online, people just put all their shit out there on their profiles, and it makes me kind of uncomfortable,” he said. “It’s all just really overwhelming. With the app, I can just grab a beer with someone, or I can run a block back to my apartment if you were, like, weird or whatever.” Apparently, he didn’t find me weird or “whatever”; we chatted for more than an hour.

The guys I met on Crazy Blind Date weren’t the sketchy, mouth-breathing rape-murderers that my friends warned me about. They weren’t creepy, sleazy or ugly; they were affable, well-mannered and totally inoffensive-looking. I didn’t find love, but of course I wasn’t looking for it, and I highly doubt they were, either (though, let's be honest, they probably would have settled for sex). I think they just wanted to go out and meet someone new without filling out 150 questions beforehand.

Technology’s become really good at doing some of the things we don’t want to do, like buying groceries or filing taxes, so it’s tempting to think we also have the awkward art of dating down to a science. But the truth is that no matter how high the match percentage, or how fancy the algorithm, mutual attraction really just comes down to a brief, fleeting moment of serendipity: you don’t really know what you’re looking for in another person until you find it, and then suddenly you’re not looking for anything else. At most, Crazy Blind Date tries to create the conditions for those moments of serendipity to happen; at the very least, it creates the conditions for a memorable “hang.”

At the end of every OK Cupid Crazy Blind Date, you have the option of shelling out $2.99 for “kudos,” points that make your suitor look more desirable to future daters. Because that is a patently stupid idea, and because going on these dates made a fair-to-substantial dent in my budget, I will refrain from doing this for Carlos, Neil and Joshua. But gentlemen, if you are reading this, I would like to give you all figurative kudos. My sincerest apologies, and thanks for the hang.