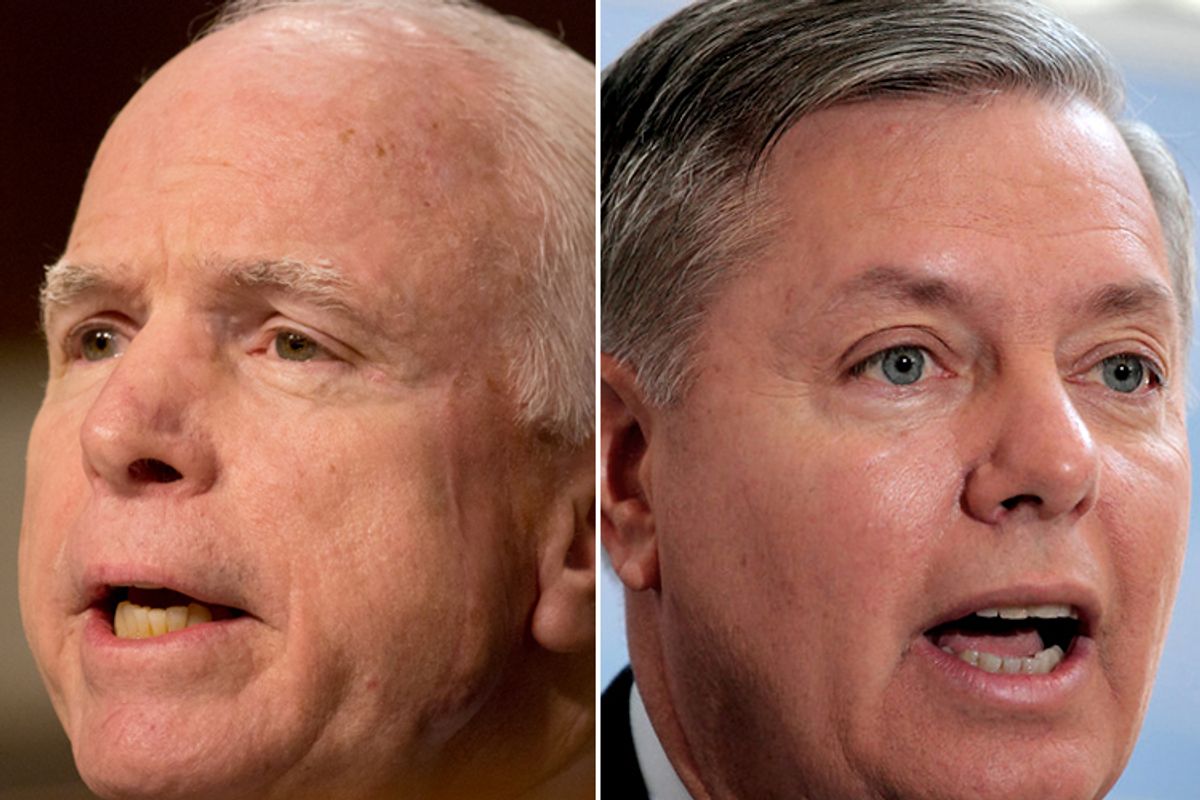 Here it is, everyone, the absolute epitome of Lindsey Graham statements:

Sen. Graham and his best friend John McCain have been blocking the confirmation of Chuck Hagel as Defense secretary, because they want to know whether President Obama called the president of Libya the night of the Benghazi attack. While that's not a very good reason to filibuster a Cabinet nominee, it is at least "a reason." The White House has complied, giving Graham and McCain what they want. Graham's response: Now he is just going to pointlessly delay the Hagel vote, because it will make him feel good. As always, with Lindsey Graham, being a senator is all about feelings.

While Lindsey Graham says he will have changed his mind on Hagel's suitability in 10 days' time, lots of other Hagel opponents are definitely not going to "feel better," because they have all convinced themselves that Hagel is basically America's Worst Anti-Semite. Here is some "proof," from a guy who writes for the depressing website named after Andrew Breitbart:

On Thursday, Senate sources told Breitbart News exclusively that they have been informed that one of the reasons that President Barack Obama’s nominee for Secretary of Defense, Chuck Hagel, has not turned over requested documents on his sources of foreign funding is that one of the names listed is a group purportedly called “Friends of Hamas.”

Hey, guess what, that is just a totally made-up group that does not exist. Dave Weigel did this crazy thing where he actually spent some time looking into the claim and it turns out, whoops, Breitbart.com's Ben Shapiro published a made-up, untrue thing, because Breitbart.com's Ben Shapiro is both a liar and a moron. (Mostly moron.) Hint No. 1 should probably have been that a pro-Hamas front group would not call itself "Friends of Hamas."

Despite (or because of) the fact that this "Friends of Hamas" thing was a not terribly convincing lie, it was repeated all over the conservative press:

It caught fire on the right in no time. "That is quite the accusation," wrote Moe Lane at RedState. "All they have to do to debunk it is to have Hagel reveal his foreign donors." In the National Review, Andrew Stiles reported that "rumors abound on Capitol Hill that a full disclosure of Hagel’s professional ties would reveal financial relationships with a number of 'unsavory' groups, including one purportedly called 'Friends of Hamas.'" Arutz Sheva and Algemeiner, conservative pro-Israel news organizations, ran versions of the story based 100 percent on links to the Shapiro original. On February 7, radio host Hugh Hewitt interviewed Sen. Rand Paul about the Hagel nomination and pushed him on the "Friends of Hamas" story.

It was also repeated by the National Review's Andrew C. McCarthy, appearing on Lou Dobbs' Fox Business show. And by Mike Huckabee. And Frank Gaffney.

So, in case you were wondering, if you want to viciously smear someone, all you have to do is send a stupid lie to a Breitbart guy and he will publish it and then everyone in the conservative movement will repeat it. Just type, "Dear Ben Shapiro I heard Chuck Hagel cashed a check for ten million Soviet rubles from a group called 'THE ALLIANCE OF EVIL'" into your AOL mail program and I guarantee Sen. Ted Cruz will be demanding answers within a week.

Meanwhile, Jennifer Rubin, who is an employee of the Washington Post, is just lazily tweeting McCarthyite guilt-by-association nonsense about how Hagel once gave a speech to a group that, on a different occasion, defended a person who said a bad thing about Israel. "#extreme," she adds, in case you were unsure whether or not she thought Chuck Hagel was extreme.

Chuck Hagel somehow made all of these people even stupider.

UPDATE: Democrats failed to garner the 60 votes needed (by a margin of 58-40-1) to move Hagel's confirmation to the floor. A date for a new vote will be set later in the month.