Their meltdown may not be funny — but it's great TV 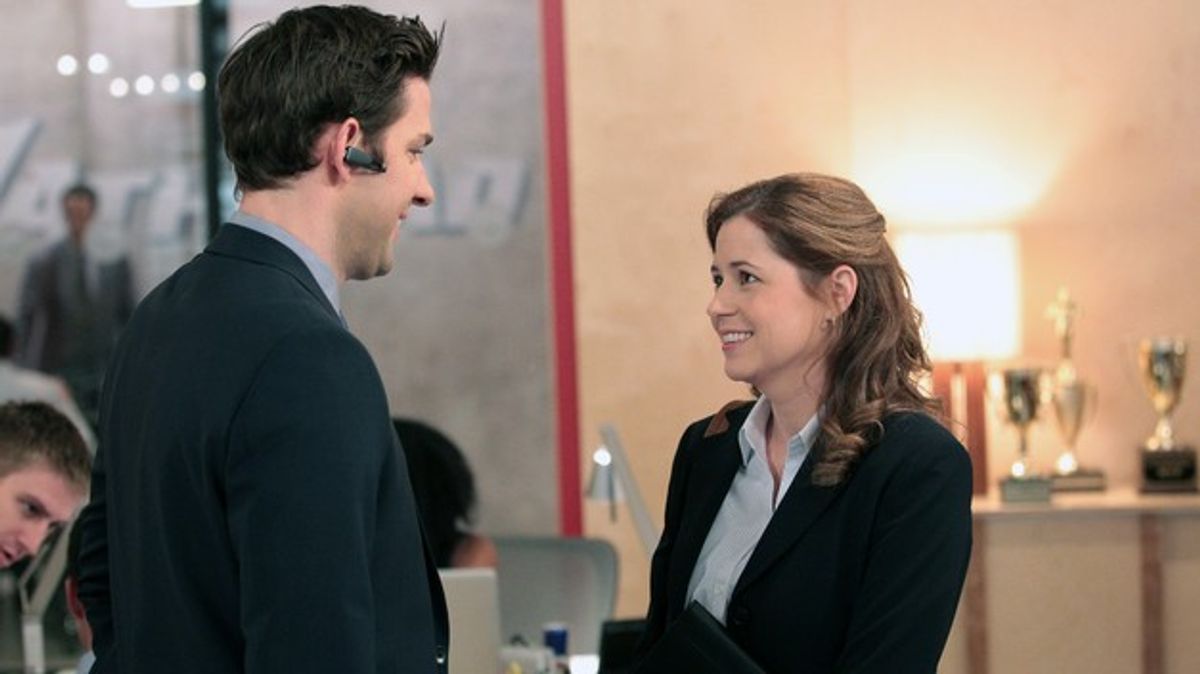 It’s been a long time since “The Office” was good: The post–Michael Scott years, even the late–Michael Scott years, have been rough, and when they haven’t been rough, they have been listless. But with the series finale looming in May, “The Office” is finally getting its groove back — and not by being funny. The long arc of this, its final season, has been the slow but sure destabilization of its sweetest and surest thing, the loving relationship between Jim and Pam Halpert. "The Office” isn’t the comedy it once was, but it has become the drama it has never been.

One of the long-running, undercover sadnesses of ‘The Office” was the status of Jim Halpert, a likable guy who could do so much more, but didn’t want to. An essay in the Awl a few years ago described “The Office” as the "most depressing show on television" because of Jim, a man audiences think of as the funny, competent, prank-playing, romantic hero of the show, but who is actually “a mediocre man who has already realized his full potential,” content to wile away his life at a dysfunctional paper company. This season, Jim finally realized that he can do more, that he wants to do more, and he did what he should have done a long time ago: He got a new job. In Philadelphia.

That Jim is going after a better, more creatively satisfying career is a cause for celebration, but he’s handled it poorly with Pam from the start. Pam worked out her own “I want to leave Scranton and have a bigger life” issues a few seasons ago when she went to Pratt, and she really is content with Jim and their two kids and Dunder-Mifflin. When Jim initially interviewed for his new job, he didn’t tell his wife. Since finding out, Pam has tried to be supportive, but she’s always felt, and always has been, slightly excluded from Jim's decision-making. Out of exuberance and maybe a little anxiety that Pam would hold him back, Jim never explained how much having a more meaningful career meant to him; anxious about holding Jim back, and hurt he didn’t ask her in the first place, Pam has never pushed him to do so. They skipped the step where they discussed what each wanted for their lives together.

Based on this lack of communication and the pair’s assumption — like ours — that nothing could really mess up their relationship, Jim’s time in Philadelphia has been difficult. He works hard and late from a distance. He’s amped and focused on work, and inconsiderate about Pam’s experience of his absence. He thinks he’s making sacrifices for his family; Pam thinks no one asked him to make those sacrifices. Pam is alone and single-parenting and resentful that Jim has upended their whole life without really asking her about it. Earlier this season, the two had an excruciating phone fight where Jim blew up at Pam for failing to record their daughter’s dance recital, even though he was the one who had to miss it and she screwed up the video for a good reason. Pam tried to explain her mistake lightly and playfully, but Jim lost his temper anyway and she ended up in tears.

Her breakdown led to the controversial introduction of the long-implied, never-before-seen documentary crew that has been filming at Dunder-Mifflin since the show began. Brian, a handsome boom-mic operator, broke through the fourth wall to comfort Pam. In the next episode he knocked a guy out on her behalf, and promptly got fired. Brian has been filming Pam for years and years and they’ve gotten close. Of course, we, the audience, know what happens to nice, normal guys when they spend every day of their working life in close proximity to Pam Beasley — like Jim before him, Brian is smitten.

I’m not sure how necessary Brian is, both as a romantic foil and token of the "real" documentary crew. I was perfectly content to believe that, as on “Modern Family,” the documentary crew didn’t exist and was just a structural device. (Because, seriously, after all these years who is bankrolling this project? NBC?)  It is interesting to think that all the characters have been knowingly appearing in a reality TV show: It explains a lot of behaviors (it explains all of Michael Scott), but it alters my perception of some of the characters. How can nice, humble, perennially unambitious Jim and Pam be Jim and Pam if they agreed to be on a reality TV show?  Or will it turn out that the American "Office” has been a multi-season, Warholian argument that every single American really just longs to be on camera?

Moreover, I don’t know that the Jim and Pam story needs a Brian, or anything or anyone else, since just watching the two of them fight and flail and miscommunicate is dramatic — and painful and harrowing and fascinating — enough. The audience brings so much knowledge about their relationship to this story line, it’s already freighted and weighted without a third party. Jenna Fischer and John Krasinski have been acting with each other for so long, and the writers have been writing for Jim and Pam for so long, that they have an ease with each other, a long-running chemistry that is that of a real couple: Watching it fray, even quietly, is intense.

Last night, without raising their voices and without talking of Brian, Jim and Pam got to the painful heart of the problem. Pam came to Philly for a job interview with a man who turned out to be a Michael Scott clone (Bob Odenkirk, whom "The Office” really should have called in when they were trying to replace Michael a few seasons ago). Pam met Jim at his office for dinner afterward and the two joked about the interview and ate Chinese food, low-key goofing around in a comfortable, funny way that was not at all sitcom-y, before Pam broached their underlying, maybe intractable issues: “I don’t know if I want this,” Pam tells Jim, about taking a job in Philly at all. “This is a little out of left field,” he says. “Is it?” she says. “I liked our life in Scranton.” “And I have started a business in Philadelphia,” he replies. And they uncomfortably smile and shrug their shoulders at each other, because that’s what the Halperts do; they contain their feelings and expectations and don't throw fits — which is part of why they fell in love, in an office full of people who couldn't do the most basic self-regulating, but also why they have gone months and months simmering in personal discontent.

The American version of "The Office” has always, in contrast to the British version, had a huge heart: Michael Scott got sent off with his soul mate after all. I don’t believe that when the series is done, Jim and Pam won't be together. But, for now, they are in trouble, and the show is methodically, un-histrionically exploring the painful disintegration of their soul mate relationship. It hurts, but it’s also daring. That's always been the description of "The Office" at its best, something the show hasn’t been in a long, long time — maybe since Jim and Pam got together in the first place.