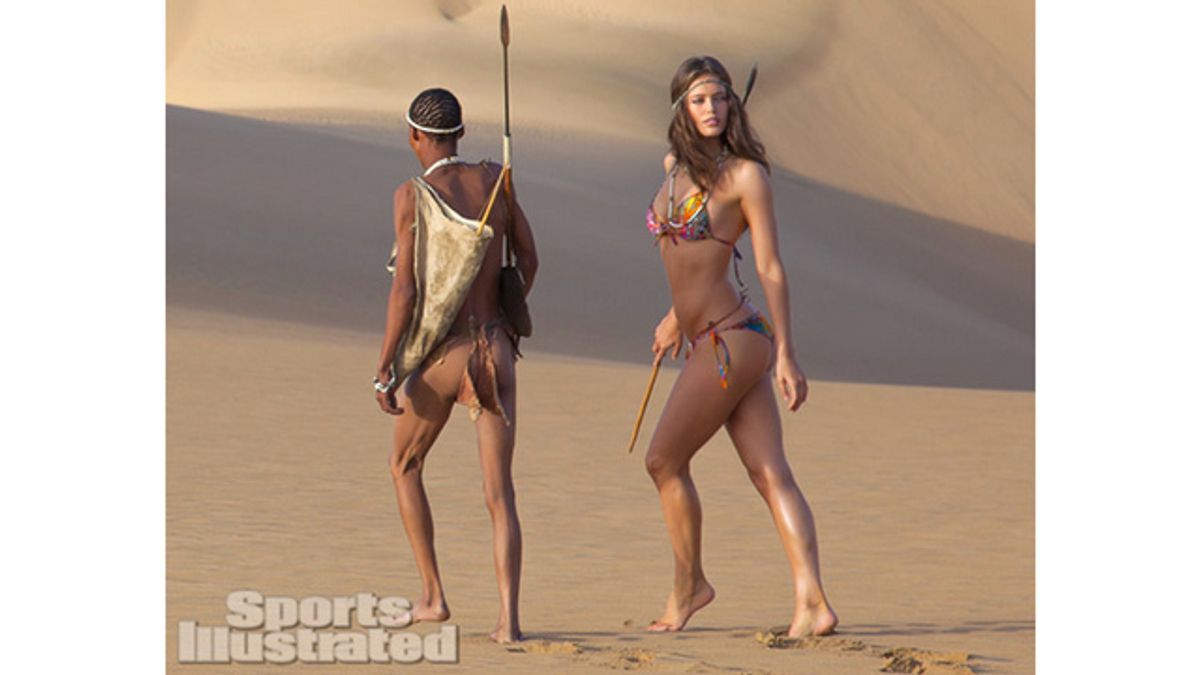 Perhaps it's naïve to expect cultural smarts from a magazine that tweets things like, "There's nothing better than Swimsuit models wearing Body Paint!" — but still.

Sports Illustrated's latest swimsuit issue used their "seven continents" theme as an occasion to run photos of (mostly) white models posing with people of color as a background that signifies the "exotic" nature of the shoot locations.

In one shot from Guilin, Guangxi (an autonomous region of China), a white model reclines on a raft while a local man uses a pole to mimic chauffeuring her around. In another, this time in the southern African Republic of Namibia, a white model poses with a black man holding a spear, wearing indigenous clothing that reveals as much of his body as hers. Sports Illustrated is hardly the first magazine or catalog to use people of color as set design, only the most recent. Other examples include famed mammy doll candlestick-makers Anthropologie, along with J.Crew, Free People, Vogue and Nylon, to name just a few.

Now, the problem isn't with featuring different cultures in commercial or editorial contexts; it's much more about editorial intent. When a photo makes clear that the story it is telling is not about the person being shot with the model, that instead they are being used purely as cultural context or "exotic" buzz -- that's the problem.

The man in Namibia, whether or not he authentically dresses like that or if he was hired to do so, is not the story in that photo. He is there for a boring, hackneyed attempt at visual juxtaposition. His brownness is contrast for her whiteness. His spear, his desert, his all-encompassing "African-ness" is the point. He's furniture. He's the Taj Mahal. The Eiffel Tower. He's there to locate the viewer in the world, not tell them anything.

And none of this is to mention that the picture offers a purely one-dimensional representation of an entire country. Did you know that Namibia is not just one big desert? Did you know this completely generic shopping complex is not actually in Fairfield, Connecticut, but Windhoek?

Now look, I am not here to regurgitate a critical race studies paper from my college years, but it's important to talk about completely bogus representations of race and culture when they come up.

But the response to the issue has largely ignored these bizarre and racially clueless images, instead focusing on Kate Upton and her nearly nude Arctic adventure. A spread which, by the way, used penguins the same way the Namibia and Guangxi shoots used people.

Are we sensing what's wrong here yet?