The economics of the Harlem Shake 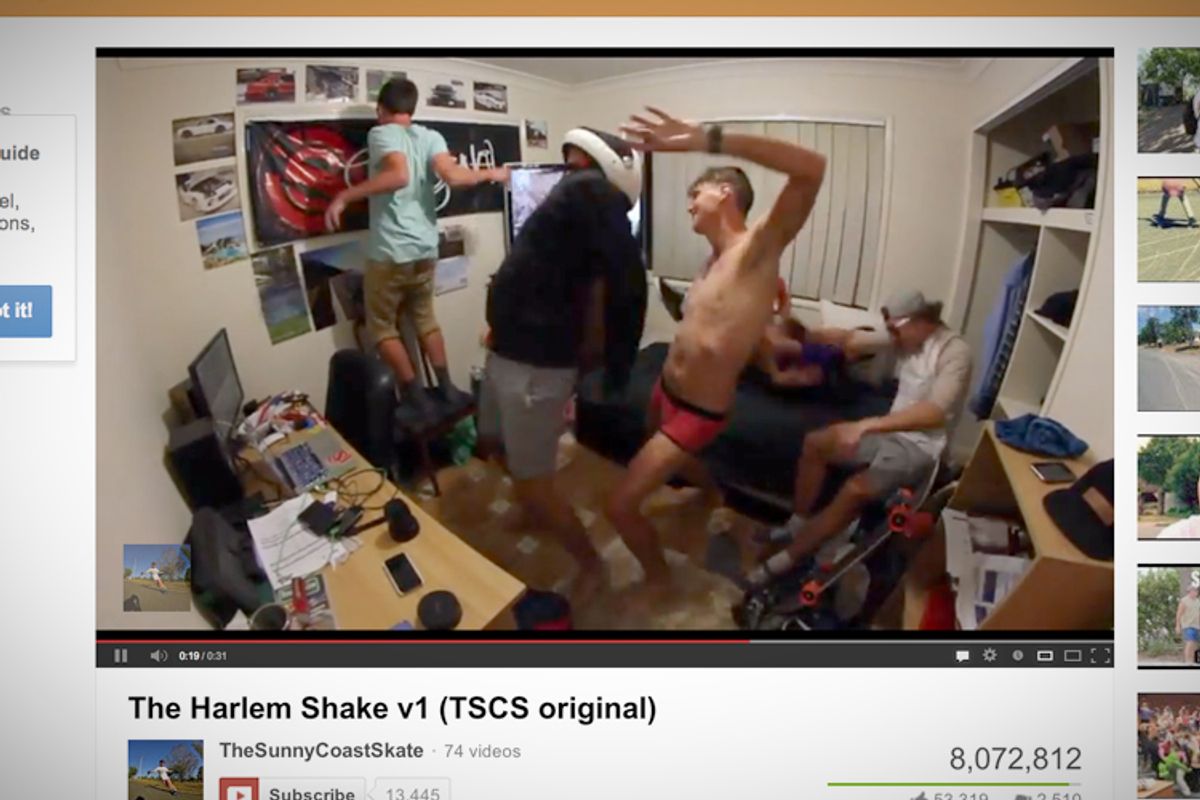 Once upon a time, music label executives writhed in terror and fury at the prospect of a world full of people appropriating their copyrighted content and using it for their own purposes.

Now, they're figuring out how to cash in.

Andrew Hampp has a fascinating piece in Friday's Billboard on the "monetization" of the Harlem Shake dance-video viral phenomenon.

For those unfamiliar with the Harlem Shake mayhem, here's a quick primer. Thousands and thousands of people are making YouTube videos which employ a boppy, electronic, vaguely Gangnam Style–sounding ditty, created by the Brooklyn DJ Baauer, as the soundtrack for a deliriously silly template: For the first 15 seconds or so of the video, one person in a group is dancing; then, after a tempo change, suddenly everyone in the group is wildly freestyling. Some of the videos are pretty funny, some are amateurish and the whole thing just looks like a lot of people having fun.

Once upon a time, record labels would be trying to slap the producers of these videos with DMCA takedown notices for copyright violation. But that's not what's happening with the Harlem Shake.

Hampp explains that Google's ContentID system is watching uploads for the use of copyrighted songs. But instead of blocking the videos in the case of Harlem Shake, ContentID passes along the info to a company called INDMusic. INDMusic then inserts ads onto the user-submitted videos. Voila: a way for the music label, Mad Decent, to make money off of what was once considered copyright infringement.

Since last Thursday, Feb. 7, INDmusic and YouTube’s automated ContentID have manually and automatically claimed over 4,000 user-uploaded videos featuring the song totaling over 30 million views by the afternoon of Feb. 14, according to YouTube’s Vivian Lewit, director of music content partnerships. Content ID allows rights holders to receive reference files on content they own, metadata describing that content and policies to help them choose what they want YouTube to do with that content -- monetize, track, or block it -- once they find videos that match.

This is how content creators profit from a culture determined to repurpose everything for its own amusement. This is how new business models evolve when old ones are turned topsy-turvy by new technology. This is how you go with the flow rather than trying to dam the river.