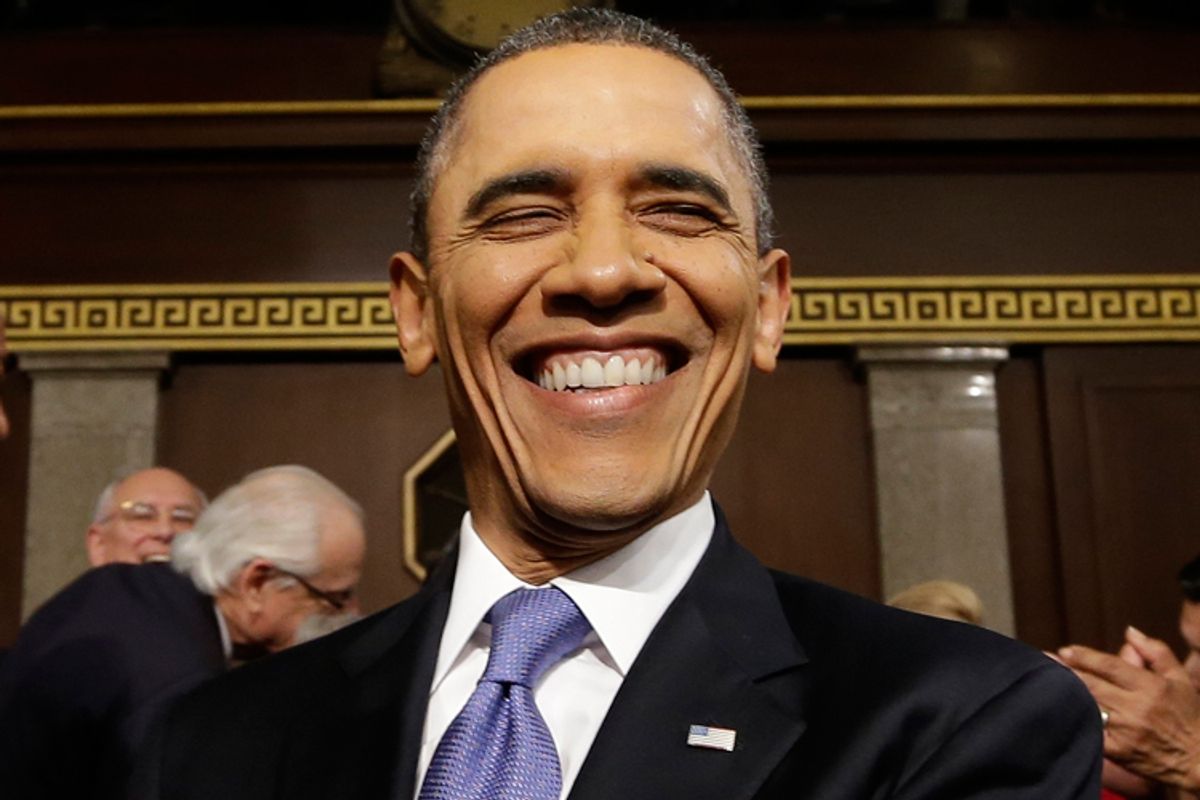 The postmortems blaming Mitt Romney's election loss, at least in part, on his campaign's digital incompetence began before the candidate had even made his concession speech. In that respect, Robert Draper's loooooooooong read in the New York Times Magazine, "Can the Republicans Be Saved From Obsolescence?" doesn't tell us much that is particularly new on the how-Obama-did-it technology front. Alexis Madrigal had this story first, and best.

But there are some interesting quotes from conservatives in the piece framing GOP woes as a case in which Democrats are behaving more in accord with the principles of the "free market" than Republicans that deserve closer examination. They offer some illumination, but don't quite capture the whole picture of what's going on.

Patrick Ruffini, up-and-coming GOP strategist, attends RootsCamp, watches Democratic organizers share tactics and lessons learned from the 2012 campaign, and tells Draper that "the thing I was struck by at RootsCamp was that in many ways, the Democratic technology ecosystem has embraced the free market -- whereas the Republican one sort of runs on socialism, with the R.N.C. being the overlord."

Ben Domenech, a founder of the RedState blog, explaining why there's a perception that, as Draper puts it, "technological innovation runs at cross-purposes with the [GOP's] corporate rigidity," says that "there are always elders at the top who say, ‘That’s not important.’ And that’s where the left has beaten us, by giving smart people the space and trusting them to have success. It’s a fundamentally anti-entrepreneurial model we’ve embraced.”

When Republicans start categorizing their own operating system as "socialist" and "anti-entrepreneurial" you know that the Grand Old Party is in serious disarray. But the interesting thing here is how Ruffini and Domenech are using "free market" rhetoric to frame the problem. That's not quite right. What's really happening is that Democrats have grasped a fundamental attribute of the digital age -- information is easy to share -- and have understood that the best way to take advantage of this special quality is set up a structure in which "smart people" are allowed to operate freely in an environment where information flows fluidly.

This is not something that a "free market" supports all by itself. It's something that a well-regulated market encourages. Left to their own devices, entrepreneurs in a free market often seek to control information flows, to build monopoly structures, influence the political process with lobbying dollars, and employ litigation to restrict competitors. In Draper's article, unhappy young Republicans note that one of their biggest problems is that technologically smart conservatives seem more interested in making money for themselves than working for the advancement of their cause. But isn't seeking profit for yourself supposed to be the end-all and be-all of free-market motivation? There's a contradiction here that conservatives are not seeing clearly.

The whole battle over "net neutrality" -- an issue that many conservatives decry as evil "regulation of the Internet" -- captures this free market problem perfectly. Supporters of "net neutrality" see it as a way to affirm and protect everyone's ability to take advantage of the Internet infrastructure. The phone and cable companies that own big chunks of that infrastructure see it differently: They want to maximize their profits by charging differentially for the use of it.

The pro-net neutrality camp believes that society at large benefits more if the free-market-profit maximizing tendencies of the big telecom communities are restricted. Enhancing society's access lets all of us share information more freely. That's smart. That's understanding new technology. That leads to more success -- for everyone.