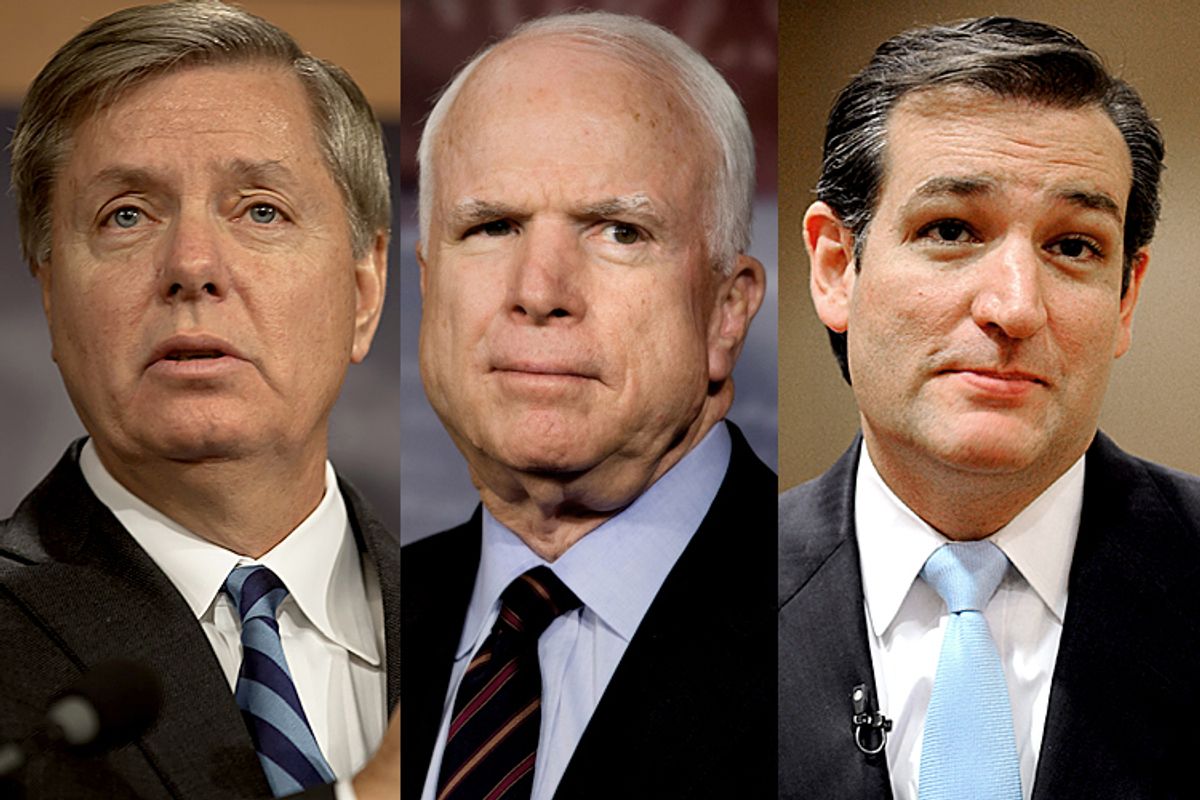 Compare that Russian meteor hit earlier this week to the one that wiped out the dinosaurs. Got that? Now think about the Chuck Hagel filibuster -- and what we can expect if a Supreme Court seat opens up sometime soon.

Some of this is just partisanship. Republicans are making the absurd claim that a 60-vote requirement isn’t a filibuster. Democrats are exaggerating how unprecedented this move is.

Still, the political press, and perhaps even Senate Democrats, seem surprised that Republicans really mean what they’ve been saying ever since Barack Obama was elected about requiring 60 votes to move anything through the Senate. And if there was a Senate norm against filibustering cabinet nominations, Republicans have no intention of honoring it.

And that matters because of the other supposed "tradition" that will be tested the first time there’s a Supreme Court opening: No Court selection has been denied by filibuster.

Now, the first problem with that claim is the case of Abe Fortas in 1968. The Senate took a cloture vote, which failed, and Fortas' name was withdrawn. Senators opposing Fortas, however, claimed that it wasn’t really a filibuster -- more or less in exactly the way that Republicans this week denied that the filibuster against Hagel was a “real” filibuster.

When it comes to norms, however, what really matters isn’t what actually happened in 1968 but what people now think happened. And during the judicial nomination fights when George W. Bush was president, Democrats called Fortas a precedent for judicial filibusters, while Republicans denied it. A contested precedent, presumably, is not a very strong precedent.

In the modern era, the key vote was Clarence Thomas, who was confirmed by a 52-48 vote, despite intense opposition, with no filibuster.

While Bush was president, John Roberts was confirmed without a cloture vote; Samuel Alito, however, received a cloture vote. Cloture succeeded by a 72-25 margin, and then he was confirmed 58-42. Was that a filibuster? Sure -- the 25 who voted against cloture were also voting to kill the nomination if it couldn’t get to 60. However, it was a filibuster that was barely supported by a majority of the Democratic opposition.

Which gets us to Barack Obama. There was no cloture vote on either Sonya Sotomayor, who was confirmed 68-31, or Elena Kagan, confirmed 63-37. Republicans, to be sure, will tell you that there was no filibuster in either case; indeed, in neither case did Republicans attempt to draw out the vote or force a cloture vote. Was that because they were abiding by a norm against filibusters? Or because they didn’t bother since they didn’t have the votes?

The evidence, up to now, has been mixed. On the one hand, Mitch McConnell and other have repeatedly said that it’s a 60-vote Senate; on the other, they claim that there was no filibuster on the two Supreme Court selections. But now we know more. Now we know that John Cornyn and others are perfectly capable of denying that the Hagel filibuster is a filibuster … and thus we know to discount any claims about when or how they would “filibuster.”

Which leaves this: Since day one of the Obama presidency, Republicans have adopted the principle that every nominee needs 60 votes. It’s not an absolute; as the final vote on Hagel will probably show if all goes as planned after the current Senate recess. Some Republicans in some situations will be willing to vote “yes” on cloture and “no” on nominations (I’m not aware of any of them having done so on legislation, but it might have happened). But it’s relatively rare.

Moreover, while the party pressure on Hagel is probably slim, since there’s virtually nothing substantive at stake in the nomination, a Supreme Court pick … well, we all know what that means. It will be a circus -- and unlike the situation in 2009 and 2010, Republican activists and members of Republican-aligned interest groups will know that all they need to defeat the nominee is a unified GOP voting against cloture. It’s not certain that Democrats wouldn’t be able to find five Republicans anyway. If so, it’s not certain that Republicans would press for a cloture vote they expected to lose. And yes, it’s possible that at a few Republicans could be yes/no votes.

But we all know that the number is 60, not a simple majority. Any Supreme Court nomination will need those five Republicans willing to vote for cloture. Whether they admit it or not, that’s a filibuster -- and it promises to be the battle of the century.