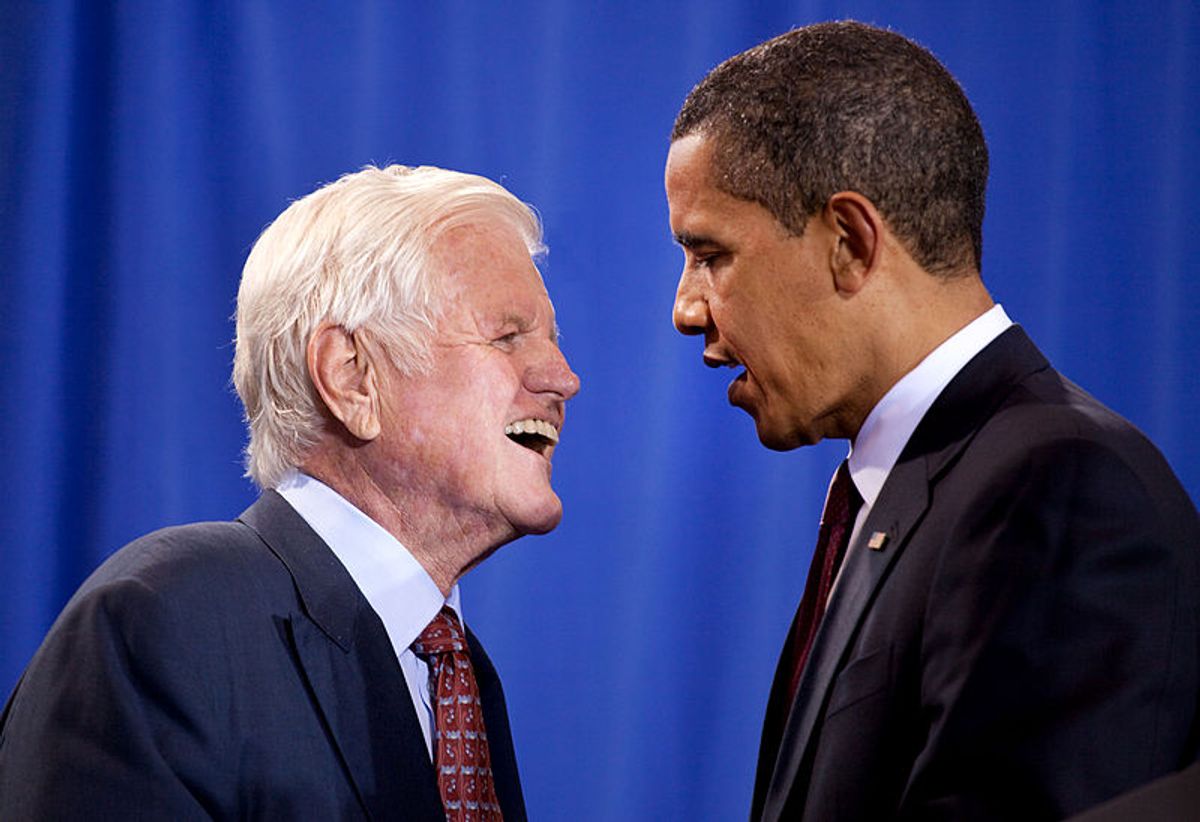 "We didn't complete the journey, but we'll get there," Kennedy wrote in 2007 following the collapse of bipartisan efforts to overhaul the nation's fractured immigration system.

For Munoz, a veteran of that fight and many earlier ones, completing the journey has never felt more possible. As head of the White House Domestic Policy Council, it's Munoz leading Obama's effort to break through years of partisan gridlock and provide a pathway to citizenship for millions of people living illegally in the United States.

"There is a definite lift in her step," said Valerie Jarrett, Obama's senior adviser. "But she's not taking anything for granted."

Sharp shifts in the political landscape have put an immigration overhaul tantalizingly close for Munoz and the president. Hispanics made up 10 percent of the electorate in the November election, and Obama won two-thirds of their votes, in part because of the conservative immigration positions staked out by Republicans during their nominating contest.

The general election forced some GOP lawmakers to reconsider their opposition to comprehensive immigration changes, clearing the way for the swift consensus that has emerged between the White House and bipartisan lawmakers in recent weeks.

The areas of agreement include a road to citizenship for most of the 11 million illegal immigrants already in the U.S., strengthening border security, making the legal immigration system more effective, and cracking down on businesses that employ illegal immigrants.

But filling in the details is expected to be contentious and emotional, with plenty of roadblocks.

USA Today reported Saturday that the White House is circulating a plan to create a visa for illegal immigrants living in the U.S. The proposal would allow them to become legal permanent residents within eight years.

Many conservatives oppose a citizenship path for illegal immigrations, calling it "amnesty."

Few people know the obstacles ahead in the immigration debate better than Munoz, who spent two decades as an immigration rights activist at the National Council of La Raza, the nation's largest Hispanic advocacy organization. She earned a reputation as a fierce advocate with a deep knowledge of immigration policy, testifying frequently on Capitol Hill and providing guidance to several lawmakers, including Kennedy, D-Mass.

At times, Munoz has broken with her own party in order to fight for immigrants' rights. In 1996, she led opposition to a provision in President Bill Clinton's welfare law that made legal immigrants who were not citizens ineligible for food stamps and other public assistance. The lobbying by Munoz and others forced Congress to soften some of the restrictions.

Janet Murguia worked in Clinton's legislative affairs office then and found herself at odds with Munoz.

"I've been on both sides of Cecilia, and I want to make sure I don't have to be on that side again," said Murguia, who later worked with Munoz at La Raza and now serves as the organization's president.

Some of the same obstacles Munoz faced as an immigration advocate have followed her to the White House.

Obama's pledge to tackle immigration during the first year of his presidency ran into stiff opposition from congressional Republicans. Despite having a Democratic-controlled Congress at the time, the White House was unable to win passage in 2010 for the DREAM Act, which would have granted legal status to young people brought to the country illegally by their family.

While overhaul efforts stalled, deportations of illegal immigrants skyrocketed under Obama's watch. Munoz was sometimes put out to defend the administration's policies and asserted that the president had to enforce the laws even if they are broken.

A small but vocal group of immigration rights advocates turned their ire over the deportations at Munoz, accusing their one-time compatriot of turning her back on immigrants. Some went as far as to call for her resignation.

Munoz declined to be interviewed for this story. But current and former colleagues say the criticism hurt Munoz deeply and she felt betrayed by people she had considered friends.

"She's a forceful champion for her point of view, but is also a loyal team player to the president and her fellow staff members," Murguia said. "That is a very difficult balancing act and I think sometimes that has opened her up to criticism from others."

Born in Detroit to Bolivian immigrants, Munoz spent her teenage years working a drive-thru window at a McDonald's before attending the University of Michigan and graduate school at the University of California, Berkeley. Munoz, 50, is a recipient of the prestigious MacArthur Foundation "genius" grant for her work on immigration policy and civil rights.

Munoz, the mother of two daughters, joined Obama's 2008 presidential campaign as an adviser on Hispanic issues. Despite her deep Washington connections, she had never worked directly in government before the newly elected Obama asked her to join the White House and lead the office of intergovernmental affairs. That job focused on outreach to state and local officials.

Last year, Munoz was promoted to head of the Domestic Policy Council, becoming the highest-ranking Hispanic in the White House and taking charge of a wide swath of policies, including education and gay rights. The move thrust Munoz into the senior ranks of the White House, though she continues to maintain a lower profile than many of the president's top advisers.

Despite her reputation as a forceful advocate, colleagues say the petite, soft-spoken Munoz sometimes can be underestimated in a White House inner circle largely dominated by men. Those close to her say she is sensitive, a quick crier, and collegial, sometimes inviting co-workers having a rough day into her office, where she pulls out enormous bags of pretzels and chocolate to snack on.

As congressional lawmakers debate Obama's immigration proposals, Munoz is providing technical assistance to lawmakers, seeking to rally support from her old activist friends, and readying for the possibility that the White House will send its own bill to Congress if negotiations stall.

While co-workers say Munoz is realistic about the challenges to come, she's already thought about standing in the White House as Obama signs comprehensive immigration legislation into law. She plans to be there clutching Kennedy's letter, a reminder of those who paved the way for the long journey she is on the cusp of completing.