Even in retirement, the pope gets immunity

As the pontiff leaves office, he'll still be "protected" from sex abuse survivors 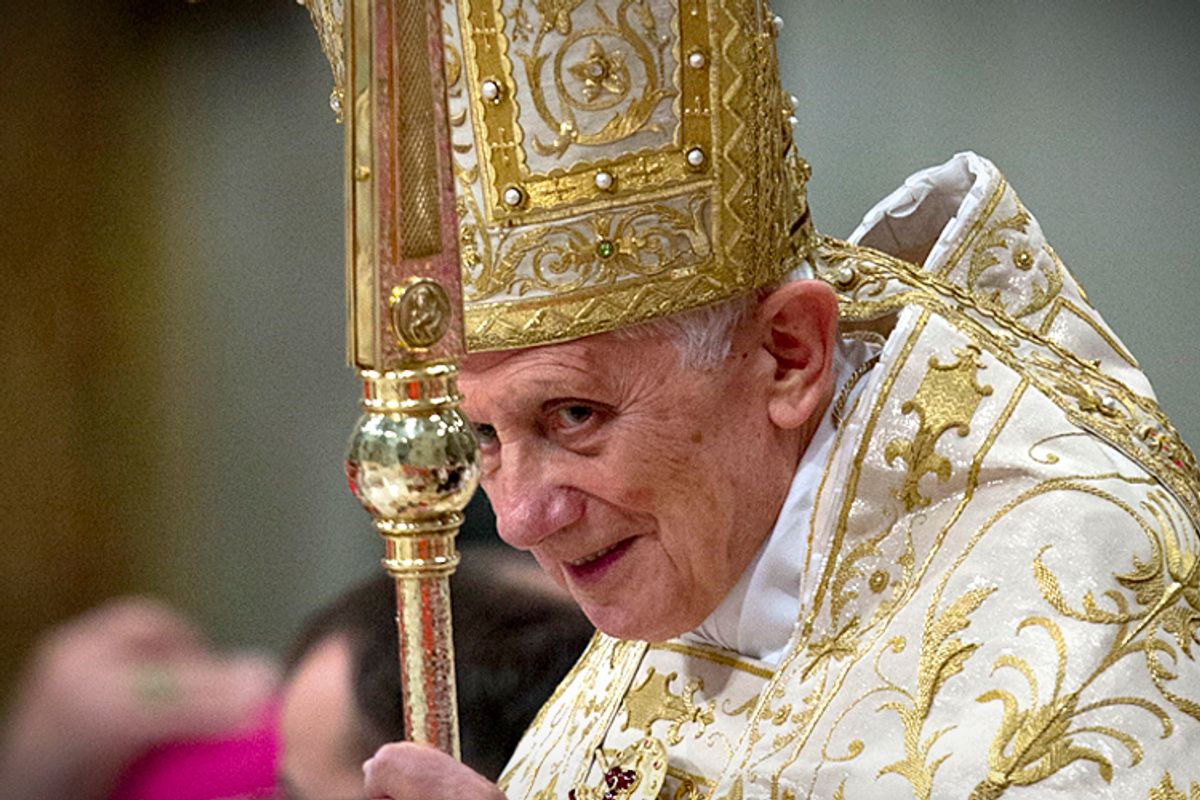 As leader of the Catholic Church, a pope wears many hats – and not just the big and pointy kind. He is the bishop of Rome. He is heir to the seat of St. Peter. He is the guy who runs the Pontifex Twitter account. He's also head of the Holy See. And as such, he gets some interesting perks. Like diplomatic immunity.

When the 85-year-old Pope Benedict XVI steps down from his job later this month, he will no longer be a head of state. Perhaps that's why he's chosen to stick around Vatican City. As Reuters noted recently, staying at the Vatican – its own distinct sovereign territory – means he'll be able to enjoy his retirement in the comfort of "legal protection from any attempt to prosecute him in connection with sexual abuse cases around the world." How convenient!

During Benedict's reign, a glut of horrific sex abuse cases, some dating back several decades, have shaken up the Catholic Church worldwide. And as they have continued to emerge, the institution has faced an unprecedented set of moral and legal challenges. In 2010, the United States Supreme Court denied the Vatican's invocation of the Foreign Sovereign Immunities Act of 1976 in a lawsuit filed against the Holy See involving allegations of abuse by Father Andrew Ronan of Oregon. Last year, however, in district court, Judge Michael W. Mosman dismissed the case.  And just earlier this month, Los Angeles Cardinal Roger Mahony was stripped of his official diocese duties after the release of thousands of pages of documents revealing his complicity in shielding sexually abusive priests from justice. Six years ago, the diocese reached a landmark $660 million settlement with victims. Mahony, by the way, is still planning on journeying to Rome later this month to help choose the new pontiff. This is the kind of man who gets to decide who's pope, folks.

And at the top of the chain of command, the former Cardinal Joseph Ratzinger himself has long faced accusations of inaction and downright obstruction in Catholic Church sex abuse cases. His track record as a man who, as prefect of the Congregation for the Doctrine of the Faith, worked hard to pursue charges of sexual abuse has often been overshadowed by his apparent limitations of scope. He seems to have been relatively unconcerned about involving law enforcement – evidenced by the strenuously internal nature of investigations in his native land of Germany during his tenure. And there's wider, more damming evidence against him. In 2005, for example, he was accused of obstructing justice after the revelation of a 2001 letter from Ratzinger's Congregation for the Doctrine of the Faith asserting "the church's right to hold its inquiries behind closed doors and keep the evidence confidential for up to 10 years after the victims reached adulthood." As Ratzinger put it then, "Cases of this kind are subject to the pontifical secret." And in 2010, church documents showed his role in halting an investigation into the abuse of 200 boys in a Milwaukee school for the deaf. Terry Kohut, one of the survivors, subsequently filed suit against the Vatican. The case was withdrawn last year.

So you can see how perhaps Benedict's imminent shift from head of the church to just another old guy without a job might represent an opportunity to challenge him, to bring him before a judge for the injustices committed on his watch. But even once he becomes the artist formerly known as Bishop of Rome, his continued presence as a part of the Holy See assures the remainder of his life will be protected. Though he'll no longer be a sovereign, he'll still be a citizen – and therefore safe from outside forces. As one Vatican insider told Reuters, "Otherwise he might be defenseless. He wouldn't have his immunity, his prerogatives, his security, if he is anywhere else."

If you view Pope Benedict as the man chosen by God to do his work here on earth, for him to have to answer to anybody, ever, might seem an unthinkable proposition. If, on the other hand, you regard him as the very human head of an organization that systematically protected men who were raping children, maybe his immunity, his prerogatives, his security might not appear on your list of highest priorities. He's a frail old man whose life is nearing its end. And he will live those last days not as a pontiff, but as just another elderly priest, well protected from any possible punishment by an organization spectacularly well versed in shielding its own -- the Catholic Church.