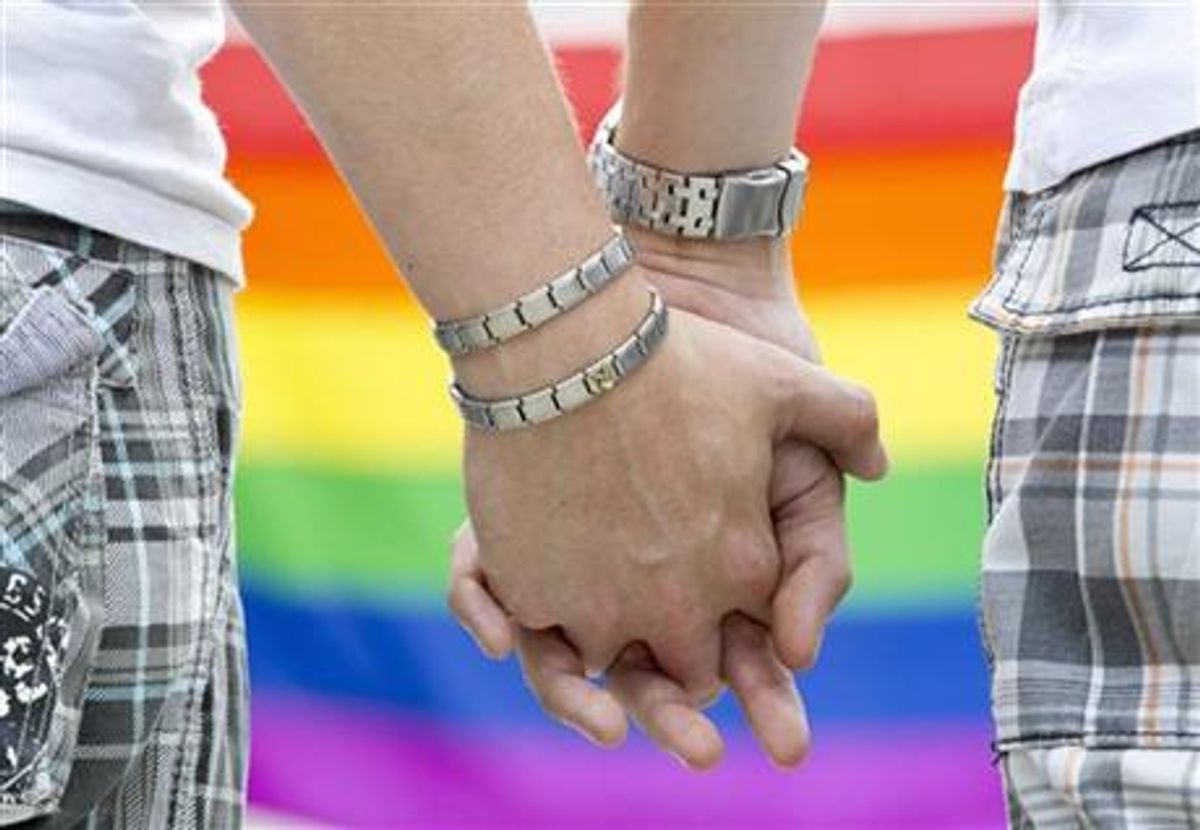 The Federal Constitutional Court ruled that one member of a civil partnership should be able to adopt the partner's stepchild or adopted child. Until now, they could only adopt a partner's biological child.

Germany has allowed same-sex couples to register civil partnerships that legally fall short of formal marriage since 2001. Unlike many other European countries, including Spain, the Netherlands and, most recently, France and Britain, it hasn't moved toward allowing full gay marriage.

The court ruled on a challenge to the existing rules from a woman who was denied permission to adopt a Bulgarian girl whom her partner had adopted. It ordered the government to draw up new legislation by June 2014.

It said the German constitutional provision that "marriage and the family shall enjoy the special protection of the state," cannot be used to justify ruling out same-sex partners adopting the other partner's adopted child.

"In marriage as in a civil partnership, adoption provides the child in the same way with legal security and material advantages in terms of care, support and inheritance law," presiding judge, Ferdinand Kirchhof, said.

Though the ruling means that same-sex couples can now adopt the same child on an individual basis, they still cannot adopt children together as a couple. Germany's main gay rights group called for that to be changed after the ruling.

In a separate case, the court is considering whether gay partnerships should be granted the tax breaks given to married couples; it's unclear when a ruling will come.

The minister is a member of the Free Democrats, the socially liberal junior partner in Chancellor Angela Merkel's coalition.

Many members of Merkel's conservative Union bloc, however, are more skeptical about gay marriage and adoption. Conservative lawmaker Andrea Vosshoff said Tuesday's ruling was "justifiable" but that it was still right not to allow gay couples to adopt a child who is entering an entirely new family environment.

Merkel's spokesman, Steffen Seibert, said the government views the ruling "with great respect" and will now consider how to comply with it.

In a separate decision Tuesday, the European Court of Human Rights ruled against neighboring Austria's decision to deny a lesbian woman the right to adopt her longtime partner's son.

The court in Strasbourg, France, found there was no persuasive reason to treat the couple differently from an unmarried heterosexual couple in the boy's adoption.

Under Austrian law, allowing the woman to adopt the boy would have severed his mother's parental rights, based on a 2006 Austrian ruling that the term "parents" was intended to mean two people of different sex.

Tuesday's ruling acknowledged that European law on adoption by same-sex couples is in flux, but found that Austria had discriminated against the couple. It ordered the government to pay more than €38,000 ($50,000) in damages.