How Paul Krugman broke a Wikipedia page on economics 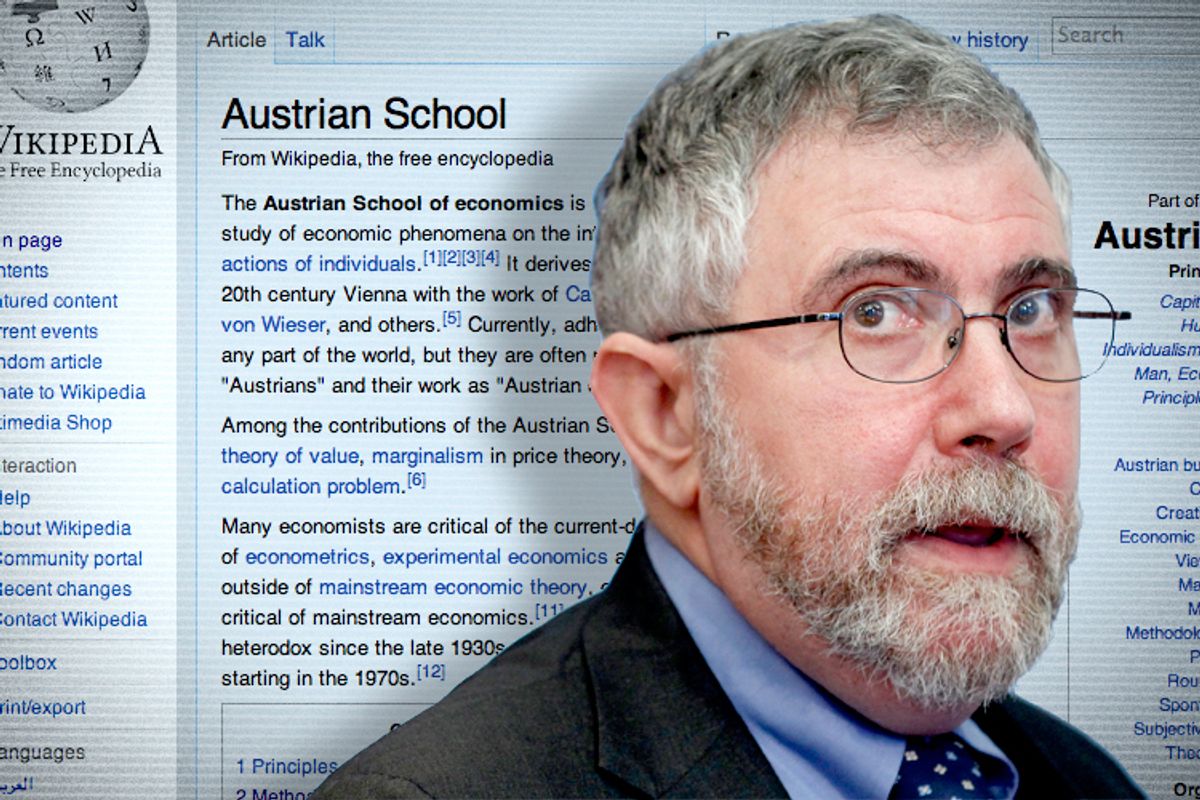 There's a lockdown on the Wikipedia page for Austrian economics and wouldn't you know it, one or way or another, it all seems to be Paul Krugman's fault.

Broadly speaking, Austrian economics, for those who have not yet had the pleasure of being introduced, are characterized by an extreme distrust of state intervention in markets, a distaste for statistical modeling and a general confidence that markets, left to their own devices, will avoid booms and busts and nasty things like inflation. From a political perspective, Austrian economics tends to lurk to the right of even such conservative icons as Milton Friedman.

For more detail, you can go, of course, to the Wikipedia page for Austrian economics. But until at least Feb. 28, if you do so, you will find that the page "is currently protected from editing." An "edit war" has been raging behind the scenes. Two factions were repeatedly deleting and replacing a section of text that had to do with a description of a critique of Austrian economics made by economist Paul Krugman.

The closer you look, the more the whole affair appears at first to be a demonstration of Sayre's Law, which holds that "in any dispute the intensity of feeling is inversely proportional to the value of the issues at stake." One side, which seems from the Talk page chronicling the argument to  be just one very stubborn person, is objecting to the inclusion of Krugman's critique on the grounds that what Krugman describes as Austrian economics doesn't actually represent the reality of Austrian economics. In other words, it's as if Krugman was saying "the problem with blue is that it is red." Therefore, his views should not be included as an example of a valid critique. The other side is basically saying that Krugman is Nobel Prize-winning economist whose opinion is well worth including according to the standards of Wikipedia. So there. And back and forth the argument went, with lots of torturous discursions into the process weeds of Wikipedia editing policies, until it got too heated and provoked a lockdown.

On one level, it is amusing that Paul Krugman, a man whose Nobel award (technically, "the Sveriges Riksbank Prize in Economic Sciences in Memory of Alfred Nobel") was lambasted by one Austrian school acolyte as "the worst decision in the history of the prize" and caused another to sigh "that those of us who believe in liberty are in for a long time in the intellectual wilderness," is indirectly responsible for a Wikipedia Austrian meltdown. But there's also a serious issue at stake.

The Krugman critique in question pointed out that many self-styled Austrians had declared that a dire, disastrous, Zimbabean/Weimar Germany outbreak of hyperinflation would be the inevitable consequence of the stimulus spending and other federal policies expanding access to credit in the wake of the financial crash. But that didn't happen. One can argue that just because some people who are affiliated with the Austrian school made terrible economic predictions doesn't mean that Austrian economics are wrong. Financial writer John Carney makes exactly such an argument at CNBC, going so far as to argue that Austrian economics actually predicted exactly what ended up happening since the financial crash. And sure, such reasoning seems to be at the heart of the Wikipedia dispute -- Krugman, argues the leading dissident, is wrongly characterizing Austrian economics as guaranteeing high inflation after a big credit expansion.

Personally, I would have been quite surprised to see Austrian economists explain in 2009, that, as Carney puts it, it would have been "entirely in keeping with the Austrian approach to economics ... [for] ... a combination of a growing fiscal deficit and an accommodative monetary policy ... [to help] prevent the housing slump and financial crisis from depressing prices generally." I certainly can't imagine any of the founding fathers of Austrian economics, such as Ludwig von Mises, saying such a thing.

For five years conservatives, including many Austrians, warned that stimulus spending and expanded credit would lead to disaster. But hyperinflation is nowhere to be seen, and the economy is slowly recovering. Paul Krugman was right. No wonder there's trouble in Austrian-school-Wikipedia land.

I asked Krugman if he was paying attention to the Wiki-kerfuffle, and the dispute over whether his characterization of Austrian economics was correct. He declined to plunge in too deep, but did say this: "That is my experience with the Austrians: whenever you try to pin them down, they insist that you fail to understand their profound ideas. And they have indeed been predicting runaway inflation for years now; it's interesting that they can neither explain why they were wrong nor admit that this poses a problem."