Who should win the Oscars (but probably won't)

Academy voters: There is still time to repent! In this year's dramatic Oscar race, is one more plot twist coming? 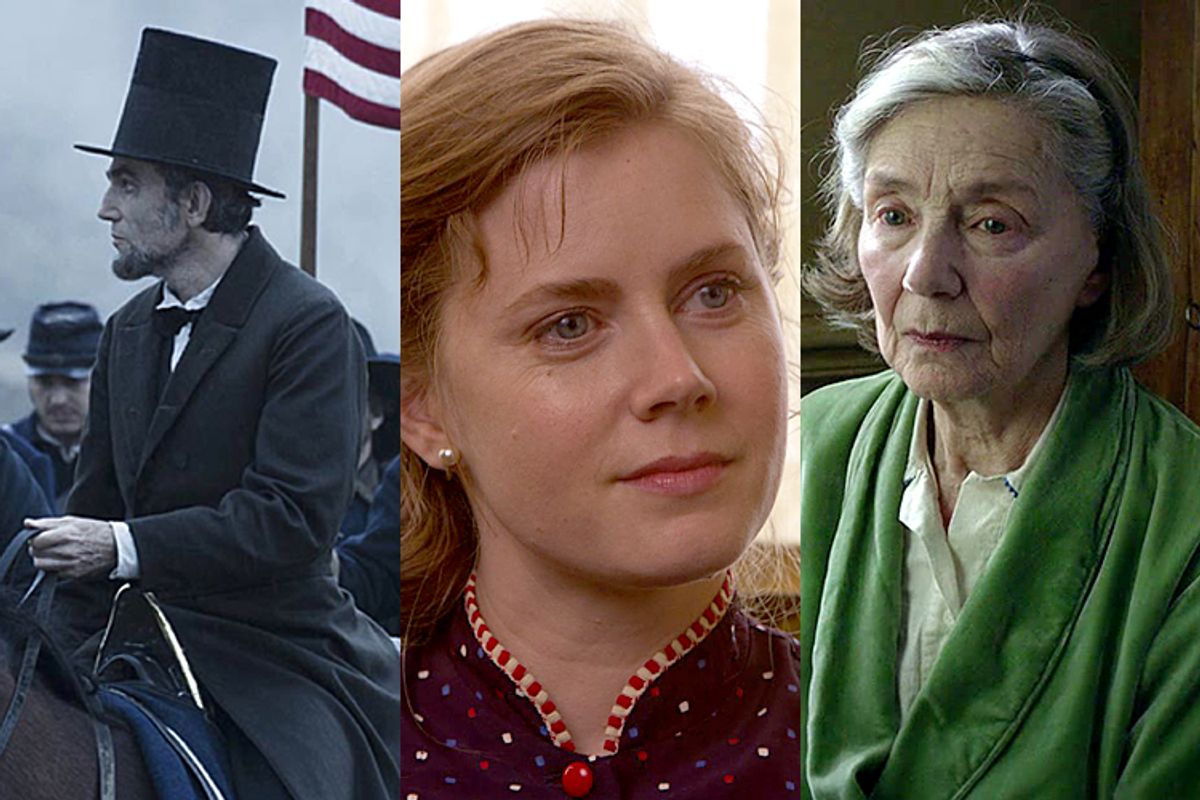 It’s been an unusually dramatic Oscar race this year, with a remarkably strong roster of films – most of which are actually popular with the general public! – and several unexpected switchbacks. Here we are, five days away from the big night, and nearly everyone expects the big winner to be “Argo,” a movie that was given up for dead after Ben Affleck wasn’t nominated for best director. So let’s stipulate that while three of the top six categories appear to have been decided beyond any reasonable doubt, there’s probably one big surprise out there somewhere that no one sees coming.

Academy voters have until the end of Tuesday to file their final ballots, but while I’m quite sure they’ve all been eagerly awaiting my advice, the real object here is to imagine the best outcome that might still happen, at the outer edges of possibility. I recognize that I’m surrendering to hopeless cliché here, as the pointy-headed New York critic urging the Philistines of Hollywood to vote for a painful movie in French. At least it’s a painful movie in French that made them all cry. If you’re asking me to prognosticate, though – I will be right about very few of these, and probably only one. While 2012 will be remembered as a vigorous comeback year for American movies, the 2013 Oscars will mainly be remembered for what didn’t happen – notably, that neither “Zero Dark Thirty” nor “Lincoln” won major awards – than for what did.

I know, this lies at the UFO-Sasquatch limits of plausibility: The Academy of Motion Picture Arts and Sciences giving its biggest prize to an elegant, deceptive and (arguably) theological two-hander featuring two actors in their 80s. Oh, it’s in French – admittedly, the only other language that academy members know for sure movies come in – and the director is a professorial Austrian who has made his disdain for American movies abundantly clear.

Still, if I had a ballot, this is how I’d cast it at this juncture. We all know what happened to “Zero Dark Thirty,” and I’m not revisiting that except to say that it’s by far the best American film in this category, and the one that will have Oscar historians shaking their heads years into the future. I don’t think I’ll ever understand what happened to “Lincoln,” which is the biggest hit (so far) among all the nominated films, has a great cast, a great script and terrific production values, and illuminates the life of America’s greatest president. I guess it’s the perfect Oscar movie – for 1994.

I’ve already spelled out my objections to “Argo,” which will almost certainly win and won’t even be in the top 10 of worst movies to do so. (Hell, it might not make the top five of this century!) It’s a trivial, self-diminishing entertainment made with considerable craft, and what else is new? But as Steve Pond of the Wrap explains in this helpful essay, academy members get to rank their votes 1 through 9, and if they belong to the anti-“Argo” camp, there’s no downside to voting their hearts. I don’t really believe they’ll give the prize to “Amour,” but it’s the last really good movie standing between “Argo” and glory that isn’t contaminated with quasi-bogus concern-troll controversy.

See above, basically – except that this one’s not totally impossible. We have the anomalous and much-discussed situation this year of a presumed Oscar-winning movie (“Argo”) whose director was not even nominated in this category. So the directing prize will function this year as a kind of best-picture runner-up, like reserve best of breed at the dog show. And with two other spurned nominees and highly plausible winners – Kathryn Bigelow and Quentin Tarantino – also out of the picture, the category’s wide open. Most people expect Ang Lee or Steven Spielberg to cop this prize, for having wrestled down the enormous technical challenges of their respective big-ass movies. I’d definitely put my money on one of them (probably Lee) if I were in Vegas, but this disordered situation also gives Hollywood its one and only chance to honor one of the greatest living directors in world cinema, who is in the later stages of his career and will never make a more accessible film.

Here we move from the realm of “definitely not” and “probably not” into the realm of “just maybe.” A lot of Oscar-watchers have convinced themselves this will actually happen. I’ve read several prediction columns in the last 48 hours listing Riva, who will turn 86 on the day of the big ceremony, as the favorite in this category. I’ll believe it when I see it; Riva’s not a beloved foreign actress in the class of Catherine Deneuve or Sophia Loren, and even in France was only briefly a star, more than four decades ago. Her shattering performance as a refined Parisian bourgeoise facing a debilitating final illness is wonderful; that’s not the issue. As lovely as it would be to see Riva on that stage, I still think it’s the year and the moment for Jennifer Lawrence’s coronation as the hottest young female star in Hollywood. And secretly, or not so secretly, I’m kind of OK with that

BEST ACTOR: Do we even need to discuss this one?

I thought about writing several paragraphs in praise of Joaquin Phoenix’s mumbly impersonation of Marlon Brando in “The Master,” which would certainly be the total contrarian dark horse of this category. But I admired that critically adored picture a lot more than I actually enjoyed it, and Phoenix’s performance reminded me of what my mother said after going to see “The Godfather”: “You see him up there on the screen, acting, acting, acting, and you say to yourself, ‘Boy, that’s some acting!’”

Sometimes groupthink is correct, and I just don’t think that Daniel Day-Lewis’ performance as the most iconic figure in American history requires further debate. Day-Lewis' diffident Garbo act can sometimes seem endearing and sometimes irritating, but as an actor he is without peer; he makes Lincoln seem both entirely familiar and completely specific, as if we’d known all along how he walked and talked. I suspect I could watch that scene where he emerges from the darkness, wrapped in a blanket, and tells that story about Fort Ticonderoga and Ethan Allen’s visit to England, at least a hundred more times. (And it’s well attested as one of Lincoln’s favorite discourses.)

Like everybody else, I saw Anne Hathaway with her anorexic Audrey Hepburn look, singing that song in “Les Misérables,” and I knew it was all over. She’s adorable and I appreciate that she pretended to be drunk and slutty for Zach Galifianakis, and I’m sure she’ll look just as cute as an oven-fried Hello Kitty button on Sunday evening. But let’s just take a moment on the way toward Anne-apalooza to appreciate Amy Adams, who takes what could have been a nothing-flavored, background wifey role in “The Master” and gives it strange, twisted, sublimated-erotic power. This is Adams’ fourth supporting-actress nomination, and she’s in grave danger of becoming one of those supremely skilled character actors who never grabs the big prize, or who wins it 15 years late for something that’s not all that good.

What an amazing field this is! All five of these guys are terrific actors, though I think the likely winner – Christoph Waltz of “Django Unchained” – gives the least interesting performance, just vamping in a predefined universe of Tarantino-shtick. Of course I loved Tommy Lee Jones as arch-abolitionist Thaddeus Stevens in “Lincoln”; if the academy wants to go that way instead of Waltz, I’m happy. But to my taste, this category offers the right opportunity to honor David O. Russell’s agreeable, mildly offbeat rom-com, which is now being sold as a commentary on obsessive-compulsive disorder, bipolar disorder, autism and whatever other mental-neurological issues of the moment. (I am the father of a special-needs kid, people, and I say give me a break with all the earnest messaging around a comedy.) De Niro often seems to take supporting roles these days purely based on scheduling issues with his other business ventures, and without regard to the actors around him or the quality of the script. This was the first part in years that seemed to capture his full attention, maybe because Pat Sr. is an intriguing and seemingly unlikely combination, part working-class Italian-American comic archetype and part Dad Agonistes, utterly unable to control or resist his cravings and compulsions.

All the nominees in this category are exceptionally good, and I don’t even know that I have a coherent argument to make against Claudio Miranda, who shot Ang Lee’s Candyland-on-acid spectacular “Life of Pi.” I mean, no other argument besides the fact that every shot in that movie threatened to put me into a diabetic coma. On every technical level, Miranda’s work is outstanding, and so are the moody, wintry, candlelit interiors shot by Janusz Kaminski in “Lincoln.” For that matter, does “Skyfall” even belong in the top five movies shot by Deakins, who is one of the greatest cinematographers of all time? Seriously, you can go to school on this guy: “Sid and Nancy,” “Barton Fink,” “The Shawshank Redemption,” “Kundun,” “No Country for Old Men.” Whatever – it sure looks great, and was shot all over the place in difficult real-world conditions, and revitalized a moribund franchise. I’m OK with the fact that “Skyfall” didn’t get a best-picture nomination – the movie itself is badly flawed – but this award would nicely augment the 50th-anniversary Bond tribute on Oscar night.

Are you serious, Maureen Dowd? You’re going to raise a stink because this tremendous screenplay, one of the funniest and liveliest historical dramas in American screen history, gets its facts wrong about how the Connecticut delegation voted? Oh, the horsey suburban outrage! Kushner will have to be content, for now, with being the best dramatic writer of his generation. While he was the pre-race favorite, I think we all now know this is going to go to Chris Terrio’s screenplay for “Argo,” which is slightly above-average Hollywood thriller fare (except for the Washington scenes, when it descends to average or below). This is the early category, however, that will determine the course of the evening: If Kushner (or David O. Russell) pulls off an upset, then the best-picture race remains too close to call.

Here’s another wide-open category where a whimsical, wise and widely beloved movie that totally got shafted by the academy could win a door prize – but almost certainly won’t. Wes Anderson’s highly specific aesthetic just isn’t on the wavelength of the aging Beverly Hills insider types who still dominate the academy, and that’s not exactly breaking news. Mark Boal’s script for “Zero Dark Thirty” actually won at the WGA awards, thrusting that much-debated film back into the race, but I’m assuming the winner will be Tarantino’s inexcusably dreadful 437-page screenplay for “Django Unchained.” Some people actually think Haneke could be in play here, but not me. I’ll ask the question in public and go Google it later: Has the academy ever given a writing award to a script that wasn’t in English? In that case, shouldn’t the prize go to whoever wrote the subtitles?