Lord of the engagement rings 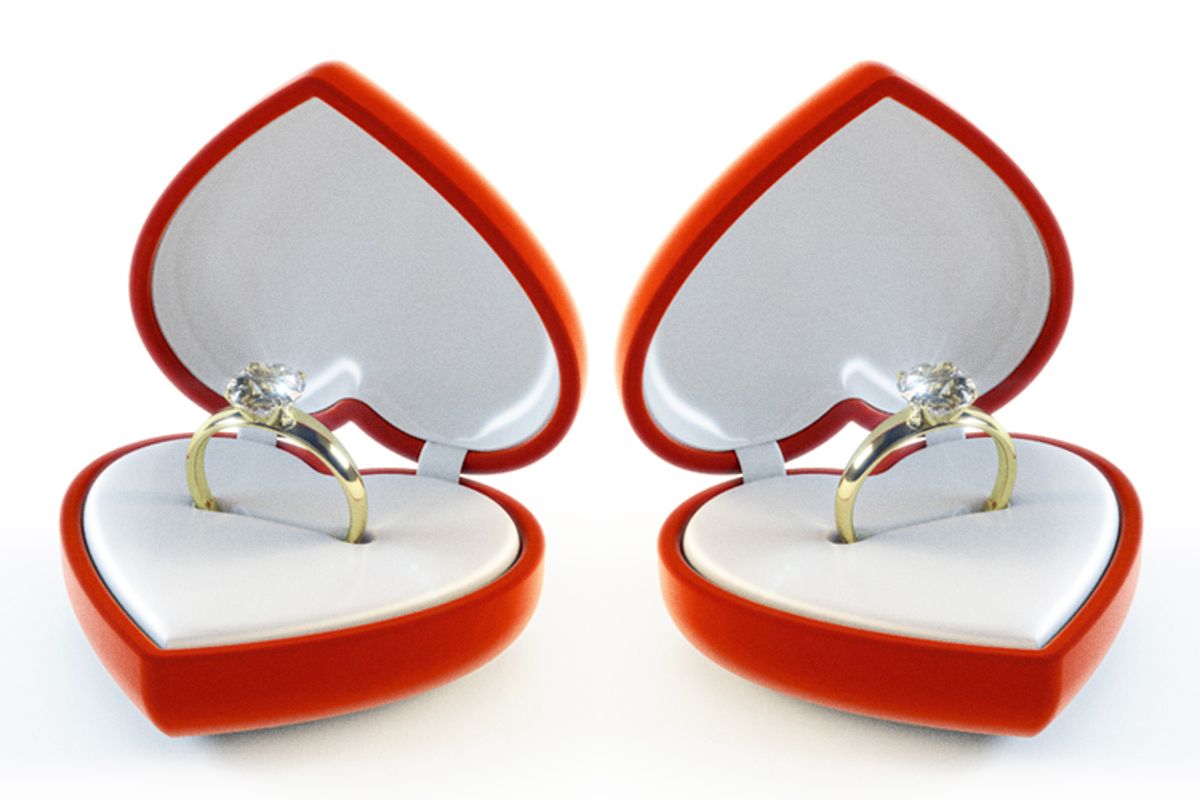 There are times in New York when the current of possibility – though maybe it’s just the primal electricity of mating -- is palpable in the air, and that evening, late May, late '90s, was one of them.

I had come to New York from Los Angeles to collect the engagement ring I’d commissioned for the girl I wasn’t certain I wanted to marry. Five months earlier I had moved to Los Angeles to pursue a job in “the industry,” and I found everything about “the industry” industrially inauthentic. That May, New York represented everything I worried I might never have.

Couples streamed into Central Park, enjoying the late light. Pinstriped professionals knocked off early from work to catch the first evening of the summer, strolling with their elegant wives on the side streets off of Park Avenue. They seemed, all of them, on their way to riches and happiness.

I’d had the ring designed by James de Givenchy, formerly of Christie’s, now an independent designer of jewelry for, I imagined, the rich and happy. James was no doubt slumming it with me and my six-carat pin-cushion sapphire, with its barely perceptible hairline fracture that made it affordable to me, and I was grateful for his attention. He was glamorous in an easy, aristo-French, signet ring way. Unlike the rest of the sloppily preppy Upper East Siders I knew, James was always beautifully turned out; bespoke Charvet shirts and well-cut jackets, jeans always dark and new. I wanted him to be my friend.

He invited me into his apartment. We stood in the foyer. I felt I was intruding.He presented me with a brown felt box stamped with his company’s logo. “It’s beautiful,” he assured me. “I hope you’re pleased.” I pulled up the lid of the box and thought I was going to puke.

I wanted to sell it to him. On the spot.

The ring looked just as it had in the many sketches I’d approved, just as I had expected. But somehow, I had liked it better as an idea. I needed the ring to be bigger, more dazzling, spectacular enough to convince me to marry.

I tried to believe James, tried to assure myself the glittery object was gorgeous –but I was just dazed. This flawed stone in this lovely ring in this delicate box was, in fact, nothing more than an object. The ring hadn’t, as I had expected, solidified my decision to marry the girl I wanted to love. I met a friend for a late business cocktail, kept my feelings to myself, got drunk. That night I flew back to Los Angeles, hid the ring in a shoe, and waited for my girlfriend to leave me.

Six months later, I was engaged.

Marina seemed to be everything my previous girlfriend hadn’t been: exotic, complicated and only half convinced she loved me. We met in Los Angeles, through my friend Peter, the day he co-opted us both to help him buy furniture. She lived in New York, a writer for Vogue. Peter was in love with her. A long-distance relationship with a worldly, refined, emotionally puzzling and highly desirable fashionista was exactly what I needed to cure my breakup-induced depression and heartbroken social reclusiveness. She seemed to exist on some higher plane of sophistication I didn’t have access to. Plus, I’m competitive, and wanted the girl Peter couldn’t have.

I slipped quickly into that thrilling state of excitement, obsession and fear that I called love. I confused neurotic with deep, and complicated with interesting. There were frenzied trips between New York and Los Angeles. We thanked God for JetBlue.

Neither of us appreciated the effort made by the other. She infuriated me by never phoning first thing in the morning, and I drove her mad by not slavering over the legs that she had shaved in the lavatory of the plane on the way to the West Coast. She had been having an affair with a married man and wouldn’t dump him. I talked too much about my ex. Eventually the married man broke it off, so I begged her to marry me. We ended up in couples’ therapy as quickly as she had the ring on her finger.

This ring was, in retrospect, to convince her that I loved her enough for a lifetime, a dramatic appeal to make up for both of our bad behavior and poor communication.

I proposed in the parking lot of Ago, then the restaurant of choice in L.A., after a brutally childish fight and subsequent makeup dinner. She accepted, gazing down at me on my knees. We drove home in separate cars. I called my parents and brother and sister that night.

The next day, I called James, who was thrilled. “After what happened last time, which was so tragic, this is just so wonderful.” I didn’t correct him about the tragedy.

I flew to New York on a weekend red-eye to have a ring commissioned. James had suggested, based on my description of my fiancée – and, within the context of my new relationship, the sensitive issue that he had designed another engagement ring for me -- that we meet a number of new jewelry designers. I agreed to try the process. The first was, like my fiancée, Italian and had partially grown up in the industrial expat community in Brazil. But after she presented us with her work, which consistently featured an indulgent obsession with snakes in every decorative form, I phoned James immediately and told him that I wanted the three of us to meet the next day.

We arrived at James’ beautifully lighted and decorated atelier and showroom, above the Givenchy boutique on Madison Avenue, on a bright, clear Saturday morning in March. As I introduced them, James and Marina seemed to share an immediate shorthand of taste and a clarity of vision for what would be an appropriate engagement ring. We let Marina pick through the sample work in the velvet-lined display boxes, trying on different rings, James commenting on one or another ring’s beauty on her size 4-1/2 finger. James opened one drawer, and among the different pieces lay my first engagement ring, which I’d consigned to him to sell. I felt a quick flash of terror. He quickly palmed it as we shared a look of having just escaped romantic disaster.

Marina chose something simple, a pavé band in yellow, orange and white diamonds. A ring with imagination, with presence. A ring unlike any of the engagement rings other girls wore, the identical emerald-cut diamonds set between baguettes from Tiffany’s. The design session took less than an hour. As she and James conferred, I felt outside the process, merely the guy who was writing the check. I sulked off to the side, playing with a vintage Cartier deco ring that held a sapphire of no less than 20 carats. I held it up for my fiancée. “This one’s next,” I said, like a child. She looked at me silently, a slight smile. Again, that other plane of existence.

The ring was ready quickly. I presented it to her in the bottom of a champagne glass, drinking in the car on the way back from the airport during one of her transcontinental visits. I gloated to my friends when the ring appeared conspicuously on her hand in a photo spread in the magazine of the New York Times. I asked her too often how much she adored it. “I adore it,” she would say.

“How much do you adore it?”

“Does Anna Wintour adore it?” I would ask her.

“It’s nicer than Plum Sykes’,” she assured me.

She broke it off two months before the wedding. I’d gone to see my brother in San Francisco. She left a message on my cell: “I’m in L.A. I’ve taken some things from the apartment.”

I asked my brother, “What does ‘taking things from the apartment’ mean?” Then we got a call from his girlfriend. Marina had called her, too, asking her to “please take care of Christian.”

It took me a full day to get back to Los Angeles.

She’d left the bed and a dresser, bought at the Long Beach flea market. Wire hung from the walls in place of the art it once held. The place felt as if it had been burgled. There were Post-it notes and packing tape strewn across the floor, and in the kitchen cabinets. I looked for things she might have to come back for: an inherited sterling tea service, her contessa mother’s "Dolce Vita"-era Italian lingerie, the jewelry box where she kept her Zoloft. She’d left nothing. The place had been pillaged. In my shock I felt like I was in Whoville, after the Grinch had picked the place clean. She wrote me a Dear John letter – which she left on the flea market dresser where the tea service had been -- but took the ring. She emailed shortly afterward that she was “still deciding” on whether to continue in the relationship, and that she wanted to hang on to the ring until she made up her mind. A few months later, she made up her mind, and sent the ring back. I wore it around my neck on a chain for a time, hoping that, in its proximity to my heart, it might summon her return. No such luck.

I sent the ring back to James.

“Not again,” he said in his heavy Parisian accent. “I’m shocked,” he said.

Eventually, James sold both the rings on my behalf. I used the proceeds to buy myself the Porsche I’d always dreamed of, the ultimate symbol of my 33-year-old unmarried status. My new motto became “high-maintenance car, low-maintenance women.” I raced it along Mulholland, and sped down the Pacific Coast Highway after midnight, sunroof open. My friend Sam told me, “Any girl who dates you for the car you drive is not a girl you want to go out with,” and the reality was, I didn’t want to go out with any girl who would date a guy who drove a 911. I liked, briefly, the image and feeling of freedom that car gave me, and what I’d sacrificed to get it. Eventually, I grew out of the car. I drove up to a friend’s house to find her in the driveway, laughing. “You look like you’re having a midlife crisis in that car!” she said. She is not famous for her sensitivity.

I want to sell the car, and haven’t. If the car’s gone, and the rings are gone, and the two women I wanted to love the most are gone, then I’m left with just me. It’s a thought I’d rather stave off for a while, driving around Los Angeles to my industry meetings in my midlife crisis Porsche.