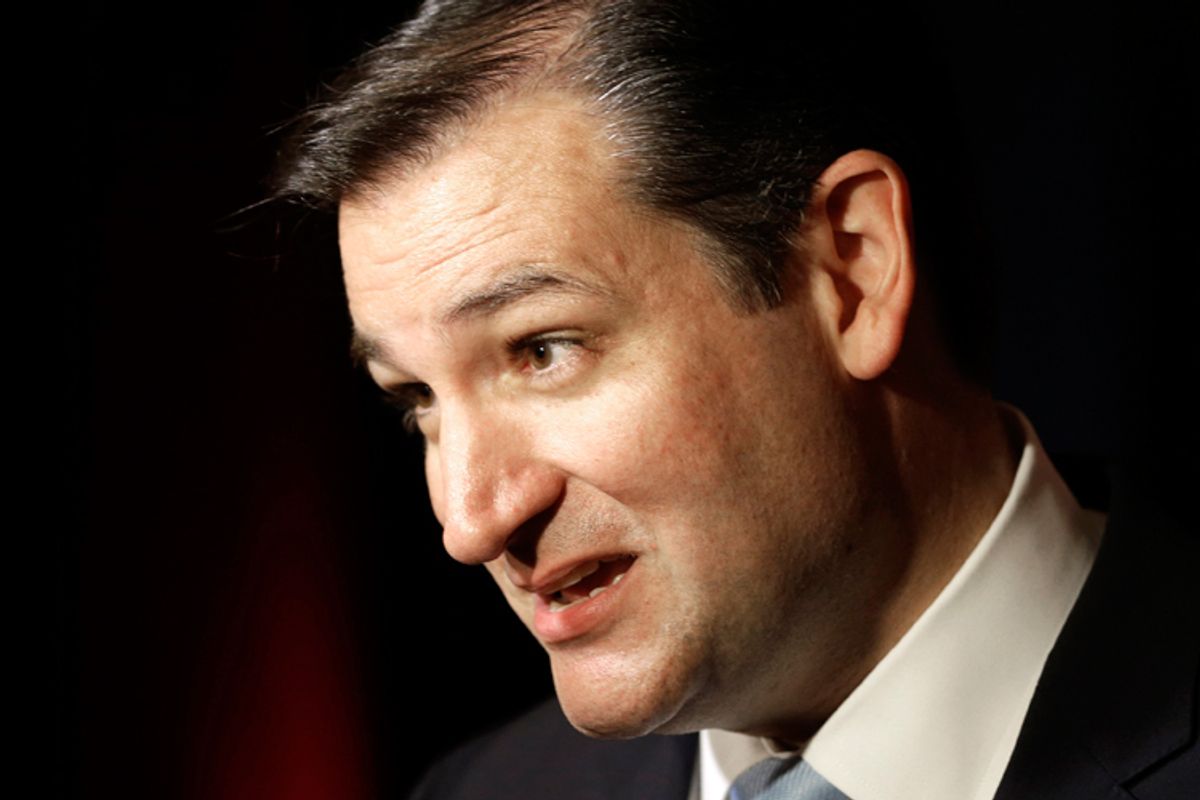 Tough-talking freshman Sen. Ted Cruz is attacking critics with a bold tactic: whining. The man who told the world, without evidence, that defense secretary nominee Chuck Hagel might have taken money from Hamas or North Korea now complains his critics are trying to “silence” him – but it won't work.

"Washington has a long tradition of trying to hurl insults to silence those who they don't like what they're saying," said Cruz.

Cruz made his comments at a visit to a Texas gun maker that manufactures assault weapons for the civilian market. “He’s our type of guy,” kvelled the firm’s marketing manager. Indeed.

It’s true that critics from Chris Matthews to Sen. Barbara Boxer have heard more than an echo of Joe McCarthy in Cruz’s evidence-free attacks on Hagel. In the New York Times Saturday, Boxer compared Cruz’s dark insinuations against Hagel to the Wisconsin senator’s unsourced tirades against alleged Communists in the 1950s.

"It was really reminiscent of a different time and place, when you said, 'I have here in my pocket a speech you made on such and such a date,' and of course, nothing was in the pocket," Boxer said. "It was reminiscent of some bad times."

Of course, Tea Party darling Allen West copied McCarthy far more directly in 2011, when he charged that "78 to 81" Democrats in Congress were members of the Communist Party. (McCarthy used to make up numbers, too, most famously having a list of 205 Communists in the State Department.) But West was roundly denounced, and he lost his Florida seat in 2012. Cruz is somewhat more dangerous.

Salon’s Alex Seitz-Wald makes a great comparison between Cruz and the Senate’s other Tea Party extremist with big national ambitions, Kentucky’s Rand Paul. (There are questions about Cruz's eligibility to run for president, because he was born in Canada to American citizens, but his office insists he's "a U.S. citizen by birth" while disavowing presidential ambitions. Have at it, birthers!) Where the unpolished Paul, a sketchily credentialed ophthalmologist, always seems a little unready for the national spotlight, the Ivy League Cruz is impeccably credentialed and varnished. A Harvard Law graduate, he clerked for Supreme Court Chief Justice William Rehnquist and specialized in Supreme Court litigation before becoming Texas solicitor general in 2003. His wife works for Goldman Sachs. That’s not the biography of a working-class hero. It shouldn’t even be the biography of a Tea Party hero, except the supposedly populist revolt was always a front for the corporate elite.

Cruz’s grandstanding may be hurting him even with conservative GOP colleagues. Sen. John McCain famously upbraided him for impugning Hagel’s character and patriotism last week. An anonymous Republican called him “Jim DeMint without the charm” in a conversation with columnist Ruth Marcus. He may also be Joe McCarthy without the charm. McCarthy won a national following because he seemed to speak for regular working-class Joes in his campaign against the State Department, which was also, to an extent, a campaign against the Ivy League elites Cruz himself represents.

McCarthy followed the path of Al Smith, who moved from New Deal innovator to anti-FDR red-baiter after Roosevelt beat the first Irish Catholic presidential candidate for the 1932 Democratic nomination. There was a common-folks appeal to McCarthy’s crusade – sadly, my Irish Catholic immigrant grandparents loved him -- with groups like the Catholic War Veterans backing both his anti-Communist vendetta as well as New Deal programs like Social Security.

Cruz doesn’t seem to carry such weight with Latinos. He won only 35 percent of the Latino vote in 2012, less than his colleague Sen. John Cornyn, who won 36 percent in 2010 (but he did outperform Mitt Romney, who only won 29 percent of Texas Latinos). Republicans are going to have to understand that Latinos have become a solidly Democratic constituency not because there are so many Latino Democratic politicians (there are more than in the GOP, but still not enough) but because they support Democratic policies on economic and social issues.

Cruz likely has far more appeal with the type of older white working-class voter that backed McCarthy than with the emerging Latino electorate. His efforts to tank even Marco Rubio’s cautious immigration reform proposals will likely make white Nativists more Cruz-friendly than Latinos in the months to come.

Of course, bullies like Cruz have a long tradition of playing the victim. When Michele Bachmann, the Tea Party’s last incarnation of Joe McCarthy, accused Hillary Clinton aide Huma Abedin of ties to the Muslim Brotherhood, she and her allies likewise claimed persecution at the hands of her detractors (which also included McCain). “It’s really an effort to demonize and take down, if they can, a formidable political adversary in Michele Bachmann,” anti-Muslim hysteric Frank Gaffney claimed at the time.

Cruz now wears Bachmann's mantle, and he wears it nicely. Playing the persecuted, he challenged reporters to at least investigate Hagel a little bit while they’re attacking him.

"A lot of media attention has been focused on the attacks leveled on me and I would encourage all of you if you want to write stories on that great, knock yourself out, but I would ask for every 10 stories you write, attacking me, perhaps write one story on the substance of Chuck Hagel's record," suggested Cruz.

That’s good advice. Because if they do, they’ll find no substance to Cruz’s charges in Hagel’s “record,” but a lot of substance to charges that he’s a 21stcentury Joe McCarthy in Cruz’s.