I hate myself for loving you, Alec Baldwin

Why is the liberal who makes us laugh so awful? 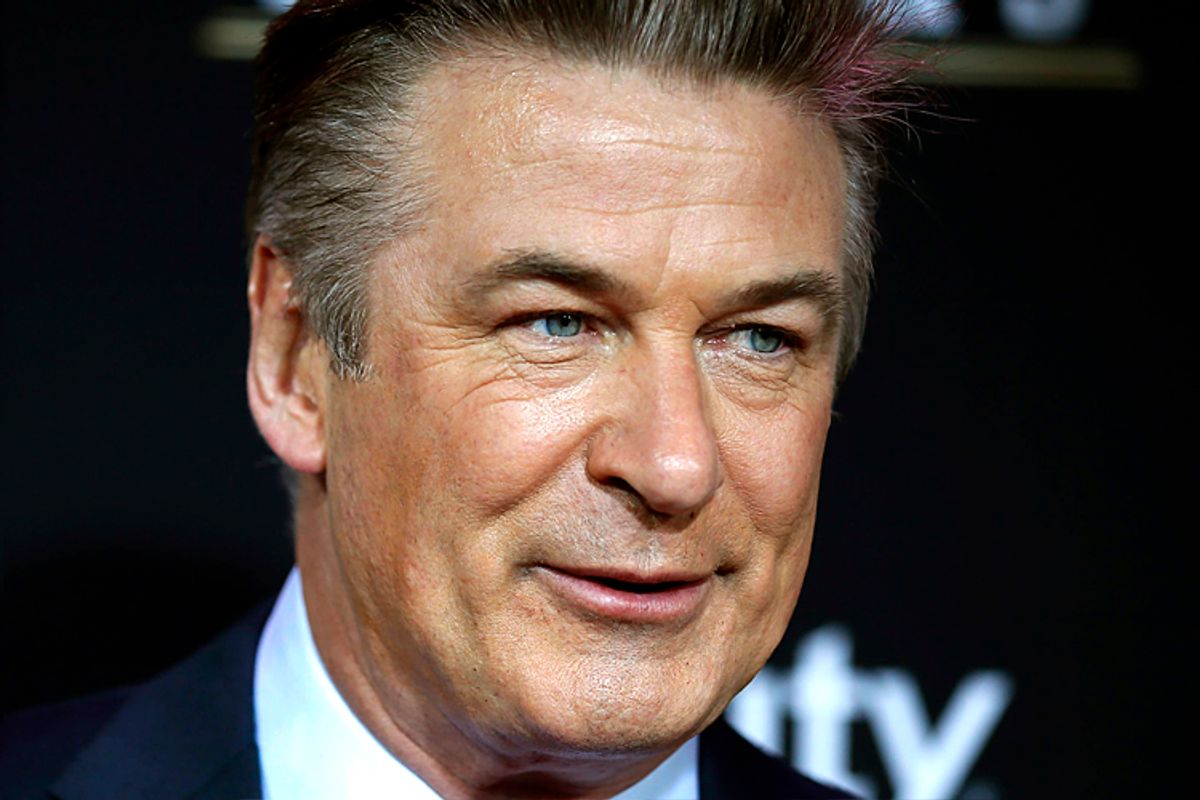 Did you ever fall in love with someone based on who you wished he or she was instead of basing that infatuation on actual, real-life behavior? Let me be more specific: Alec Baldwin, why do you make it so hard for us to defend you, when all we wanna do is love you?

Baldwin, as the guy we want to believe in, is a little bit of perfection. In his career, he's gone from a heartbreakingly hot piece of Grade-A beefcake to Oscar-nominated leading man to iconic "Saturday Night Live" host to subversively brilliant, Emmy award-winning sitcom star -- all while championing the causes of liberal politics and animal rights that make our knees go weak. Frankly, if all he had going for him were the ridiculous blue eyes and his deadpan delivery of the phrase "Schweddy balls," he'd outrank roughly 80 percent of the planet on the coolness scale.

But then there's that other Alec Baldwin. The hot-tempered, impulse-control-challenged goon whose antics make us cringe. And with the series finale of "30 Rock" firmly behind us, it's that guy who's been grabbing the spotlight lately.

Baldwin's anger issues and poor word choices have long been part of the package. Fifteen years ago, he declared that in other circumstances, "We would stone Henry Hyde to death and we would go to their homes and we'd kill their wives and their children." In 2007, he famously left an outraged voice mail for his then-11-year-old daughter, Ireland, in which he called her a "rude, thoughtless little pig," referred to her mother, Kim Basinger, as a "thoughtless pain in the ass," threatened to come out to California to "straighten you out" and seemed unclear on his own child's age. Last year, Ireland damningly brushed off the infamous incident by saying, "He's said stuff like that before just because he's frustrated." Just a dad calling his daughter a pig, no big thing. In 2011, Baldwin was booted from a flight for refusing to stop playing Words With Friends during takeoff, prompting a Twitter outburst in which he railed at the injustice of it all by complaining illiterately, "United shud hav app onboard where u can play WWF w other passengers. American shud have app where u read the new testament w flt attendants." And last summer, he brawled with a New York Daily News photographer while he was getting his marriage license. But this week, he really out-Baldwined himself.

First there was an altercation with a New York Post reporter and photographer that was either a deliberate provocation by the Post or a racist hate crime by Baldwin. Photographer G.N. Miller says Baldwin called him a "coon," a "crackhead" and a "drug dealer" when he tried to snap the actor coming out of his downtown apartment over the weekend. The New York police's Hate Crimes Task Force is now investigating the charges. Baldwin, for his part, has filed a complaint against the photographer who he says "assaulted" him. A UPI report Tuesday said that sources who'd heard the audio of the encounter disputed that there's any mention of those words on the reporter's tape of the incident. And in the best TMZ correction in at least days, the gossip site amended its claim that Baldwin had said, "I want to choke you to death" to the reporter, to the assertion he'd in fact said, "I want you to choke to death." Which, you've got to admit, is a somewhat less aggressive wish.

When he's not frothing at the paparazzi like a Fox commentator thinking about feminism, Baldwin still somehow makes time to come off as a volatile character to work with. On Wednesday, the producers of the new Broadway play "Orphans" announced that Shia LaBeouf would be leaving the production, setting off the disclosure of a flurry of revealing emails from the show's creative team – including notes from and about its hairy-chested costar. LaBeouf wasted no time posting a series of emails on his Twitter stream, including one in which the apparently exhausted director Daniel Sullivan writes, "Alec is who he is, you are who you are. You two are incompatible. I should have known it." In another email, LaBeouf says that "a man can apologize, even if it's just to end the bickering. Alec, I'm sorry for my part of a disagreeable situation" -- a sentiment that seems to have come directly from a hilariously pretentious old Esquire list on how to be a man. One can only wonder if this means that Shia LaBeouf also knows how to cook eggs and when to use galvanized nails. A reply from a correspondent identified as "Alec," meanwhile, reads likewise like an Esquire pearl of wisdom itself. "When the change comes, how do we handle it, whether it be good or bad?" he writes. "What do we learn? I don't have an unkind word about you. You have my word."

And that, in a nutshell, is our Alec. A jerk and a gentleman, sometimes in the same paragraph. Baldwin is a tremendously talented performer and a champion of the kind of causes that gets liberals hot and bothered. He's strange and witty. He is also, no doubt, an easy target for the likes of the New York Post's crack team of idiots with pointy sticks, who know they'll always get a good show from the easily provoked thespian. He's a man who can graciously say he doesn't have an unkind word for his costar. But he's also the big baby who will throw a tantrum over not being able to finish his Words With Friends game, who screams at little girls. He's a philanthropist and a spoiled, raging jackass. He's too good to leave, too bad to stay.

In an interview last year, Alaia Baldwin, daughter of Alec's colorful brother Stephen, said, "No matter how much you think you understand a Baldwin, you really don't unless you are one." Maybe that's as good as it gets with Baldwin. We love him; we hate him. We're entertained by him; we're grossed out by him. And if there's one thing we'll never, ever get a bead on, it's understanding him.