Bobby Jindal doesn't want the GOP to be the "stupid party," but fellow governors are plotting to wreck higher ed 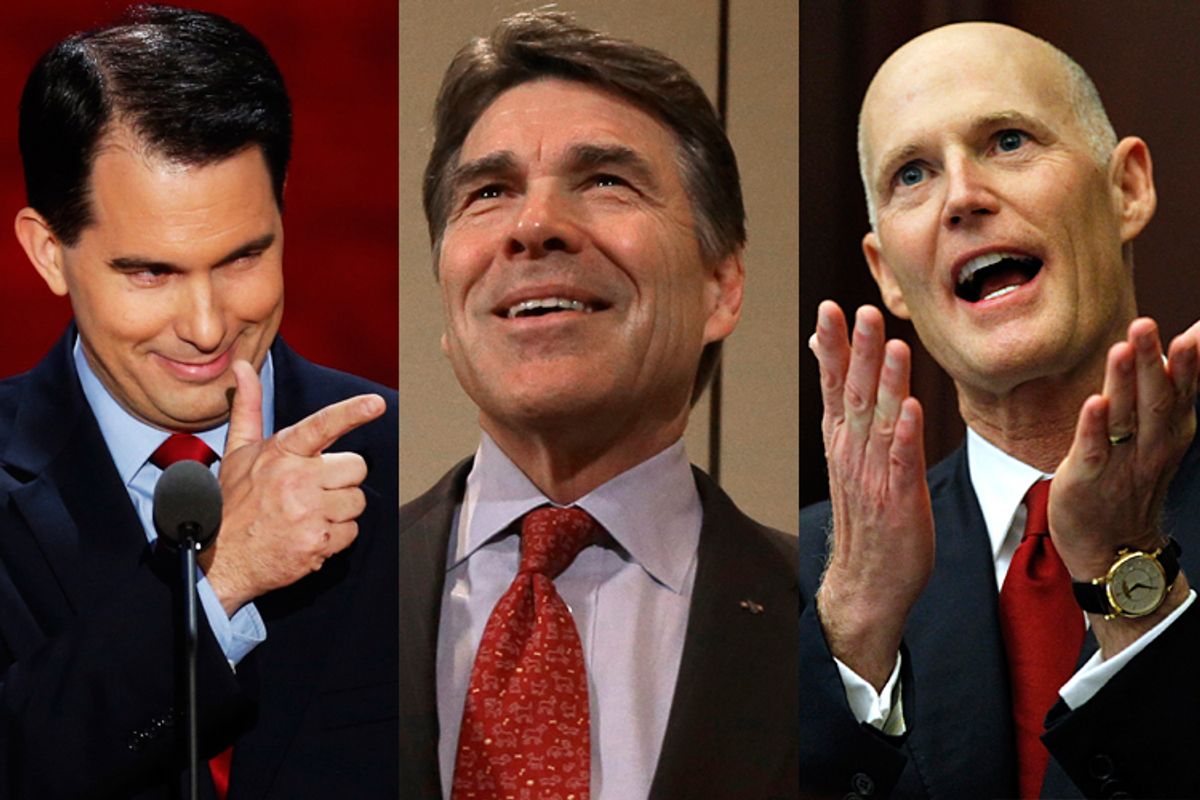 Are you crazy? The Internet will definitely ruin college!

That's what my inbox has been telling me ever since my story two weeks ago about the inevitable invasion of MOOCs (massive open online courses) into higher education, "The Internet Will Not Ruin College." The negativity wasn't unanimous, but it was definitely illuminating.

Information is not the same as knowledge! Online education might work for remedial algebra or the basics of computer programming, conceded several professors, but when the goal is to teach students to think and write critically about history or literature, the benefits of teaching thousands of students simultaneously via their iPads becomes much hazier. University administrators pushing MOOCs, they argued, are more interested in cutting costs or finding new sources of revenue than in delivering the best education possible. Most students who do register for MOOCs never finish them, they warned, and the available data suggests the kinds of students who need the most educational assistance tend to be the ones who benefit the least from online classes.

Oh yeah, and the whole thing is a right-wing plot to defund public education, screw the humanities, and help corporations profit off of students.

The critics of MOOCs make many good points. And yet, from the perspective of someone who has watched closely as Internet-enabled distribution turned the music and publishing industries upside down, a lot of the clamor initially sounded a little like passengers on a sinking ship in the middle of a typhoon complaining about bad weather. Yeah, it sucks, but storm's a coming, people; it's time to start swimming! The spread of quality, low-cost online education is going to shake things up. As one professor said to me via email, "The large lecture at a community college or a satellite state university is about to go the way of the passenger pigeon, and the mass extinction will be just about as fast."

But what if MOOCs actually turned out to be part of a right-wing plot?

After some reflection, it's become clear to me that there is a crucial difference in how the Internet's remaking of higher education is qualitatively different than what we've seen with recorded music and newspapers. There's a political context to the transformation. Higher education is in crisis because costs are rising at the same time that public funding support is falling. That decline in public support is no accident. Conservatives don't like big government and they don't like taxes, and increasingly, they don't even like the entire way that the humanities are taught in the United States.

It's absolutely no accident that in Texas, Florida and Wisconsin, three of the most conservative governors in the country are leading the push to incorporate MOOCs in university curricula. And it seems well worth asking whether the apostles of disruption who have been warning academics that everything is about to change have paid enough attention to how the intersection of politics and MOOCs is affecting the speed and intensity of that change. Imagine if Napster had had the backing of the Heritage Foundation and House Republicans? It's hard enough to survive chaotic disruption when it is a pure consequence of technological change. But when technological change suits the purposes of enemies looking to put a knife in your back, it's almost impossible.

Call them the three horsemen of the MOOC apocalypse. Florida's Rick Scott, Texas' Rick Perry and Wisconsin's Scott Walker all see themselves as education reformers, and they are all seeking ways to lower the cost of college education while at the same time cutting state funding support. Their holy grail: the so-called 10K degree -- a university education completed for just 10 grand.

Inside Higher Education's Kevin Kiley lumped the three governors together in an illuminating story last November:

The three governors have much in common when it comes to their approach to higher education, such as mandating low-cost options like the $10,000 degree; holding down tuition prices, particularly at flagship institutions; tying funding to degree completion, particularly in fields deemed to be in “high demand”; paying faculty on the basis of performance, including how they fare on student evaluations; and likely asking the institutions to do it all with less state money ... All three have made calls for reducing the cost of producing a degree through online courses and competency-based assessment.

MOOCs  fit nicely into the 10K-or-bust model. The more courses that the University of Texas can offer students at rock-bottom-cost, the less the state, in theory, has to subsidize, a fact that led Perry to applaud the University of Texas' decision last fall to join edX, the nonprofit MOOC founded by Harvard and M.I.T.

In Wisconsin, Walker has proposed a "flexible degree" program that incorporates MOOC-like online educational elements. In Florida, the state university system's Board of Governors is considering, with Scott's encouragement, whether to establish an online-only university, allow each existing college to do its own online thing, or put together some kind of collaborative approach.

At the same time, in all three states, the governors have made it painfully clear that they have no intention of increasing funding support for higher education. Quite the opposite! The University of Wisconsin system has been targeted for cuts of over $250 million under Walker. Scott approved a $300 million cut to Florida's public universities last April. Perry approved massive budget cuts at all levels of public education in Texas in 2011, including a 9 percent across-the-board cut to the University of Texas system.

Budget cuts for higher education are not, of course, limited to states with Republican governors. In California, Gov. Jerry Brown has been quite vocal about his belief that MOOCs will play an important role in supplementing a congenitally underfunded public education system. But in Texas, Florida and Wisconsin, the push to cut costs is accompanied by undisguised scorn for the whole enterprise of higher education, insofar as it pertains to anything more than equipping people with marketable skills. That mission of the humanities to help us think more critically, to deepen our knowledge of the world? Forget about it.

In 2011, Scott told the Sarasota Herald-Tribune that he didn't think it it was in the "vital interest" of the state to have "more anthropologists." Last November, a task force established by Scott went so far as to recommend higher tuitions for humanities majors. In Texas, one of the biggest conservative backers of educational reform, former oilman Jeff Sandefer, a huge supporter of online education who is closely connected to Perry, savaged the humanities sector as a place where "most of the rewards in the profession go to writing narrowly focused academic research articles that few read, the vast majority of which would never, and I want to stress never, be supported by the market."

Sandefer may well be right about what the market will support. But do we want our great publicly funded universities to operate only with an eye toward market demands?

The answer to that question, from conservative higher ed reformers, is obviously yes. They'd rather see taxpayer money spent only on educational curricula that will target the subset of academia referred to as STEM: science, technology, engineering and mathematics. Not uncoincidentally, the MOOC educational model is probably better fitted for STEM-focused education than it is for the humanities.

I spoke on Wednesday with Daphne Koller, one of the founders of Coursera, the Stanford spinoff that is one of the big players in the for-profit MOOC world. She vigorously disputed the notion that the MOOC model was less appropriate for humanities education than for the hard sciences. Koller believes that with the right grading "rubric" students can grade each other's papers even on issues of critical reasoning and grammar, thus solving seemingly daunting logistics problems. That seems debatable. It's certainly reasonable to say that we are at the very beginning of learning what will work and what won't, but it's also safe to say that most of the professors in the social sciences that I talked to about MOOCs in the last couple of weeks would disagree with her.

And that's where it gets tricky, and potentially tragic. If neither MOOCs nor state legislatures support the classic model of a humanities education, what happens to the anthropology and history students of the future? The scenario is ugly: University systems faced with declining public funding support are increasingly forced to turn to MOOCs, to the benefit of hard sciences and vocational training. Meanwhile, the humanities sector gets hung out to dry, unable to take advantage of new technology to the fullest extent while forced to make do with less funding.

And that, of course, is exactly what many conservatives want. For many conservatives, the humanities departments of public universities are bastions of the "tenured left" busily brainwashing the young people of America into godless socialist postmodernism. They'd much rather for-profit corporations were in charge of the educational agenda than the current academic elite.

With or without the help of people like Rick Perry and Rick Scott, online education will become a more and more important part of how we educate ourselves, at all levels, all over the world. But this particular disruptive transformation has a conservative wind at its back, and that's something to watch, and perhaps even resist.