Did a gay blackmail scandal bring down the pope?

The pope's abrupt retirement gets stranger: Now an Italian newspaper alleges corruption at the Vatican 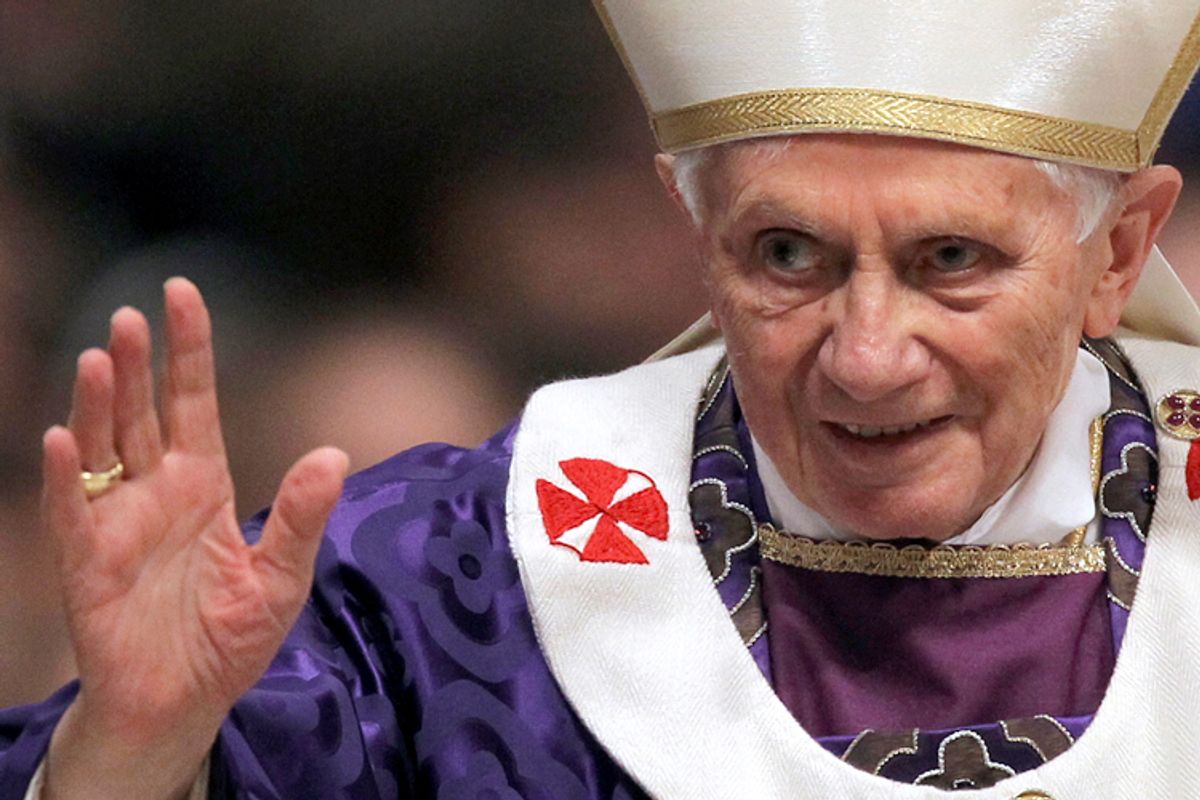 You know what the sudden, surprising, once-every-700-years story of the pope's resignation needed? What every dramatic story line does: a gay blackmail twist. And so the Italian daily newspaper La Repubblica this week reports on a very tangled web that claims to have brought down a pope, under the irresistible headline "Sex and career, blackmail in the Vatican: Behind the resignation of Benedict XVI." It's like "Pretty Little Liars" for octogenarians.

The paper says that Benedict made his decision to step down on Dec. 17, just one day after he received a revealing 300-page dossier from a trio of elderly cardinals. He'd assigned them to investigate last year's scandal involving a slew of leaked confidential Vatican documents and letters that purported to show corruption and internal conflict within the Holy See.  The "Vatileaks" mess was just another of the embarrassments the church has faced during Benedict's reign -- including a money laundering investigation and record-breaking settlements in sex abuse lawsuits. But the leaks were a particularly personal humiliation to the pontiff -- the documents in question had allegedly been stolen by his own butler Paolo Gabriele. Gabriele later told investigators he released the documents "for the good of the Church." "I was sure that a shock, perhaps by using the media, could be a healthy thing to bring the Church back on the right track," he explained in his earnest pretrial testimony.

Now, La Repubblica says that the trio of cardinals, who've been looking into the matter since last year, revealed to the pope a faction within the Vatican "united by sexual orientation" that had been subject to "external influence" of a "worldly nature." (The paper helpfully explains this is Vatican-speak for blackmail.) A source it says is close to the cardinals who prepared the report told La Repubblica, with equal poetic obscurity, "Everything revolves around the non-observance of the sixth and seventh commandments."

The Vatican has neither confirmed nor denied the newspaper story, though skeptics in the more pro-Benedict camp have been quick to question it. Writing in the Irish Independent, Gerard O'Connell said the conspiracy accusations made "Dan Brown look like an amateur" -- even while acknowledging that rumors of "the existence of a gay lobby and blackmail" have swirled around the Vatican for years.

Everything about the pope's imminent exit has smelled weird from the moment it was announced – his, after all, is not traditionally a job for quitters. But whatever the accuracy of the La Repubblica story – and heaven knows we may well never get to the bottom of it -- it adds color to an already interesting picture of His Holiness. It suggests that the enfeebled 85-year-old man would be motivated not by his health, not by his desire to make way for new leadership, but by a report prepared by three octogenarians and involving a secret gay cabal. You can almost picture him wearily sliding his ferula and fancy ring across his desk and saying, "That's it, guys. I'm outta here."

You can blame it on the gays, blame it on blackmailers with access to explosive secrets -- although given all the considerably more horrendous acts that have been exposed  in recent years, you've got to wonder if there's any straw capable of breaking that camel's back. Instead, the latest allegations only serve to add to an unflattering, already existing image of the man who sits in St. Peter's chair – a weary geriatric who just doesn't want to deal with his company's problems anymore.