Pick of the week: A "Girls" guy creates an ambitious thriller-comedy double bill

Alex Karpovsky, aka "Ray," is a real-life auteur with an intriguing light-and-dark pair of movies 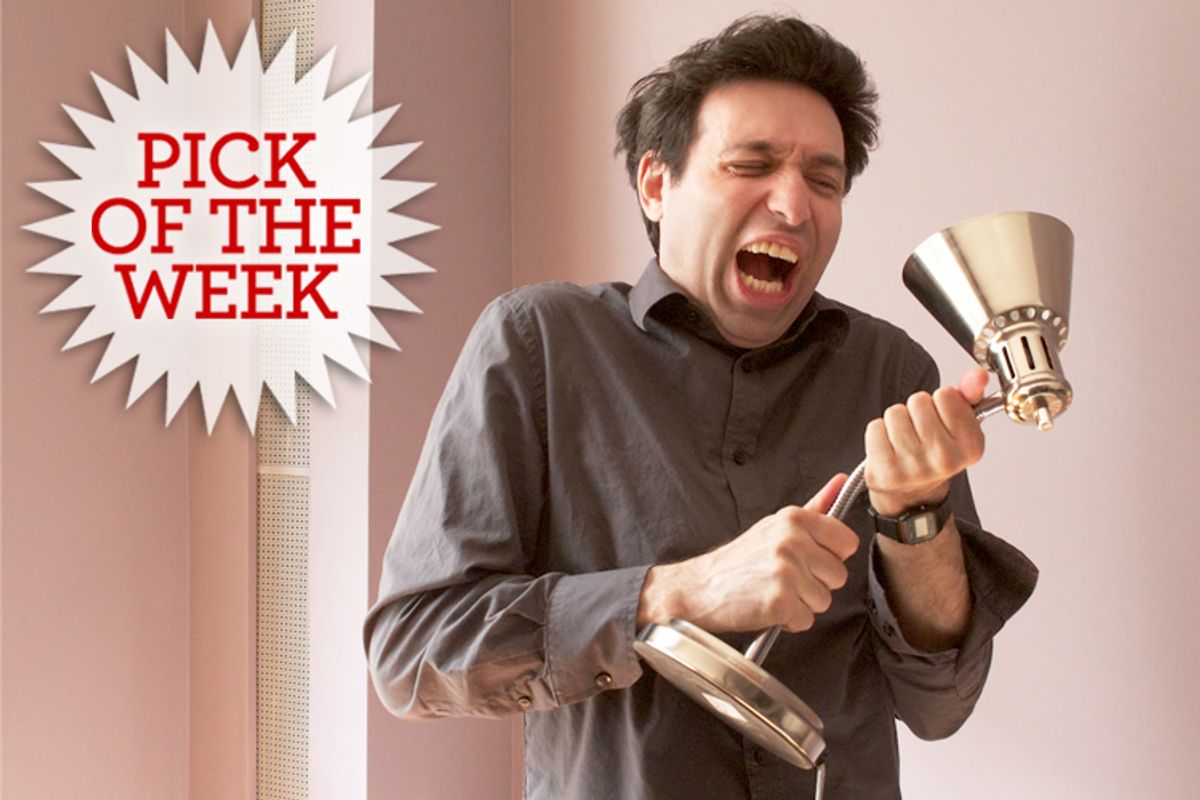 If you already know who Alex Karpovsky is, you’re either a loyal watcher of Lena Dunham’s “Girls” (on which he plays the recurring and hotly debated character of Ray Ploshansky) or the sort of person who has attended the SXSW Film Festival in Austin, Texas, more than once. Or perhaps you’re a member of his immediate family; I don’t know whether that’s Karpovsky’s real-life mother on the phone in his new shaggy-dog road comedy “Red Flag,” abusing him in Russian about how badly he treated his ex-girlfriend. But this young actor and filmmaker’s ultra-indie, Brooklyn-centric obscurity is about to change. A peculiar double bill of very different but thematically related movies directed by Karpovsky reveals him to be a subtle, intelligent and “adroit filmmaker” (it’s the phrase he uses in one of the films, in a suicide note), and he has a supporting role in the Coen brothers’ upcoming early-'60s folk music drama “Inside Llewyn Davis.”

I realize I’ve already gone some distance toward making Karpovsky sound like the most irritating person in the entire world, and I know it’s always easier to hate young, ambitious and energetic people on principle, rather than giving them a chance. But here’s the thing: Karpovsky is aware of your possible objections to his existence, let alone his work. He shares them, to some degree! What makes me so encouraged about his potential is that he uses his angst-ridden, self-conscious persona and ambivalent nerdy-handsome appearance judiciously. He never tries to make himself seem like the coolest guy in the room, like certain prominent actor-directors (excuse me, I need to cough: Affleck!), nor does he wallow in endless, nebbishy self-pity. If I may put it this way, he’s trying to learn from the crimes of Woody Allen and Philip Roth, while still exploring similar terrain.

“Red Flag” and its chillier companion piece “Rubberneck” – which are both available on VOD and open theatrically in New York this week – are not Karpovsky’s first directing efforts, but they represent a major step forward. He made a 2008 feature called “Woodpecker,” which had an interesting pseudo-documentary premise about the people engaged in the inconclusive search for the Ivory-billed woodpecker, a species long believed extinct and then maybe-sorta-kinda rediscovered. I didn’t honestly think the movie's heavy-handed symbolism lived up to its intriguing setting in the Arkansas backwoods, and considering the treatment Karpovsky gives it in “Red Flag,” it’s possible he agrees. He plays himself, or at least a sad-sack indie filmmaker named Alex Karpovsky, who has just bailed out of a seven-year relationship – hence the subtitled hectoring from Mom -- and is trying to scrape up a few bucks by showing “Woodpecker” to college audiences and film societies in mid-size Southern cities.

One lonely night on the road, Alex hooks up with a cute but crazy-eyed young woman named River (a nifty comic turn from Jennifer Prediger), who might as well have DO NOT TOUCH emblazoned on her face in red letters. He regrets it immediately but River won’t leave him alone, at least not until Alex’s even more hapless pal Henry (Onur Tukel), a writer and illustrator struggling with an unnecessarily macabre children’s book, shows up. Henry and River flip for each other, apparently, but Henry doesn’t know about Alex and River – and then, after Alex has a meaning-of-life epiphany during the Mardi Gras parade in Baton Rouge, La., he makes his ex, Rachel (Caroline White), fly down for 12 hours so he can propose to her with a hastily purchased pawnshop ring. If it’s all reasonably familiar indie-comedy terrain, it’s delivered at a brisk, economical clip with plenty of laughs, and a series of running gags that keep getting funnier. I could try to explain why Alex always says “frittata” instead of a common two-syllable intensifier that also begins with F, but it’s better in the movie.

If “Red Flag” is an agreeable comedy on its own, it gets much better paired with “Rubberneck,” which tells a similar story in the darker mode of a psychological thriller, with the genders reversed and the setting pushed several hundred miles north. This really is a double bill, one that can easily be consumed in an evening: “Red Flag” and “Rubberneck” are each under 90 minutes long, and each deepens and sharpens the other. How deliberate this was I can’t say; “Rubberneck” immediately put me in mind of the classic slow burn of vintage thrillers like Fritz Lang’s “M” and Michael Powell’s “Peeping Tom,” although Karpovsky and co-writer Garth Donovan have cited all kinds of other things, from “Michael Clayton” to “Caché” to “Fatal Attraction.”

Still, there’s no mistaking the fact that both movies explore the consequences of a one-night stand, both feature an unbalanced character with stalkerish tendencies, and both include Hamlet-like moments in which Karpovsky’s character contemplates ending it all. In “Rubberneck” he gives a much quieter performance, in oval spectacles and tailored, conservative clothes, playing a Boston scientist or lab technician named Paul who becomes romantically obsessed with Danielle (Jaime Ray Newman), an attractive co-worker. (Karpovsky shot much of the film inside a real-life Boston cancer research lab.) Paul and Danielle date briefly, and we never exactly find out why she cuts it short, beyond the obvious: Paul gets clingier, creepier and more damaged the more we get to know him.

If the setting of “Rubberneck” is cool, clinical and suburban, the storytelling echoes that approach, giving us plot and character revelation in precisely measured doses. While I felt “Rubberneck” was by far the superior film on technical grounds – whereas “Red Flag” is a more obvious crowd-pleaser – I also watched it second, and was increasingly aware of the ways it served as “Red Flag’s” dark-side twin. Both films are studies of the cost of moral cowardice and of the famous male difficulty in growing up; both are lonely existential complaints rendered as unshowy, unpretentious no-budget cinema. Yes, they’re adroit – that really is a good word for it. And that’s no reason to kill yourself!

“Red Flag” and “Rubberneck” are now playing at the Elinor Bunin Munroe Film Center in New York, and “Rubberneck” also opens March 1 at the Brattle Theatre in Boston, with other cities to follow. Both films are now available nationwide on-demand from cable, satellite and online providers.