By Associated Press - with additional reporting by Katie McDonough 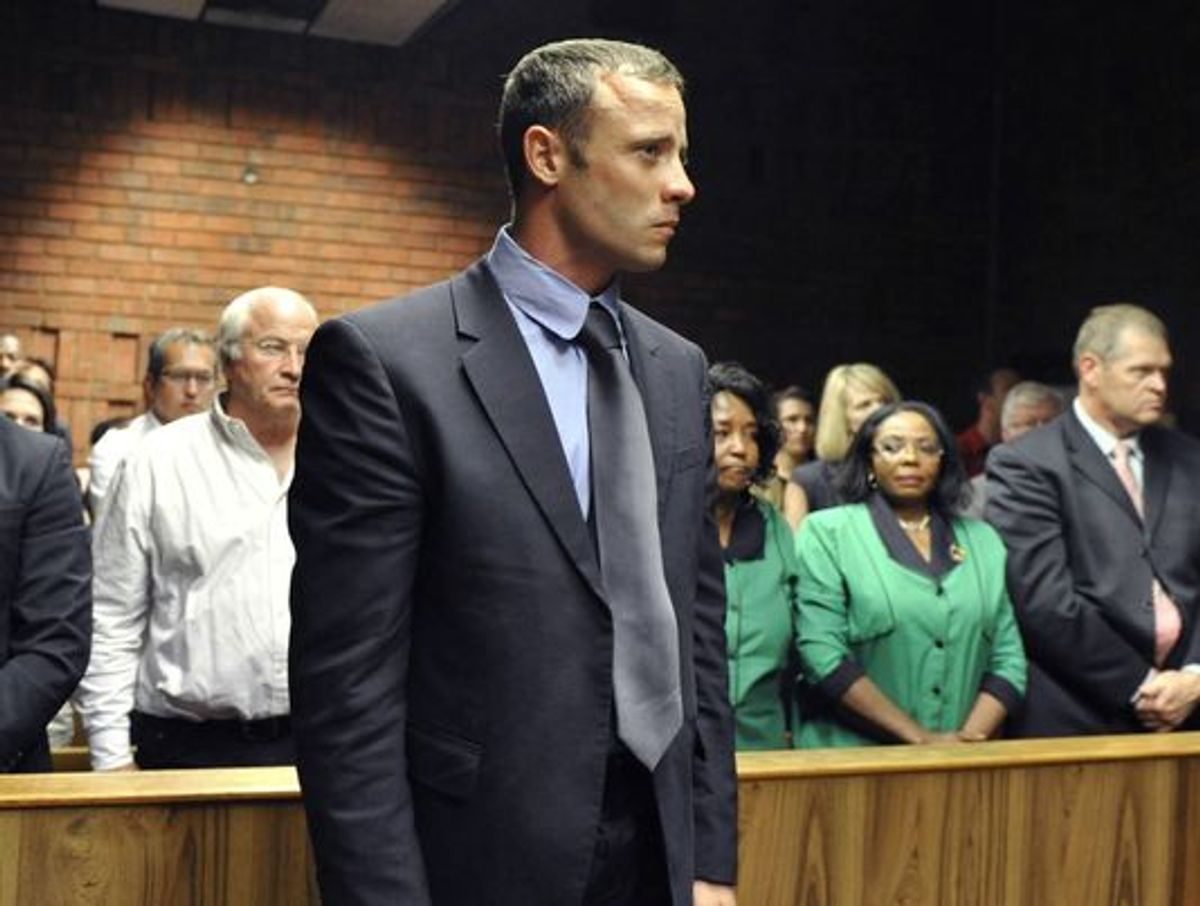 Oscar Pistorius will be freed from custody pending his trial in the Feb. 14 shooting death of Reeva Steenkamp, and magistrate Desmond Nair has set bail at 1 million rand (approximately $112,771 USD).

Pistorius will be released until his next court appearance on June 4. As a condition of his bail, he must surrender his passport and all travel documents. He will also be forced to turn in all of his weapons and firearms, and is prohibited from purchasing or owning additional firearms.

He will report to a probation and correctional officer upon his release and until the case concludes.

Nair said Pistorius' sworn statement about the events of the morning of the fatal shooting -- in which the athlete says he shot Steenkamp "accidentally," because he believed she was an intruder -- had been a consideration and helped his application for bail.

Pistorius shot and killed Steenkamp. He has been charged with premeditated murder.

Oscar Pistorius will be freed from custody pending his trial in the Feb. 14 shooting death of Reeva Steenkamp.

Magistrate Desmond Nair's reasons for granting Pitorius bail, as reported by the Guardian:

• He did not think Pistorius was a flight risk.

• He did not think the prosecution had shown that Pistorius had a propensity for violence.

• He did not think the prosecution had shown their would be public outrage if he were released on bail.

• He did not think the prosecution’s case was so strong that Pistorius’s only reasonable reaction were he released would be to flee.

But he also pointed out holes in Pistorius’s story which may prove important when the case comes to trial:

• Why did he not verify who was in the toilet?

• Why did Steenkamp not scream back from the toilet?

• Why did the deceased and the accused not escape through the bedroom door rather than venture into the toilet?

• Why would the accused venture into danger knowing the intruder was in the toilet, leaving himself open to attack? He returned to the dangerous area. What if the intruder was waiting for him?

And he said he had difficulty with the defence's version of why the accused slept on the other side of the bed from usual that night.

After hours of recapping and rhetorical questions (Would Pistorius "duck and dive all over the world only to avoid a culpable homicide charge" in the end?), Nair told the court that he did not believe Pistorius to be a flight risk. He added that the prosecution did not do enough to "establish whether or not Pistorius had a house in Italy," which "would have been important."

None of the factors for refusing bail have been established, Nair said.

According to the Guardian, part of Nair's reasoning was based on Pistorius' willingness to give a "detailed account of his version of events (improbabilities notwithstanding)."

PRETORIA, South Africa (AP) — The defense and prosecution both completed their arguments Friday in Oscar Pistorius' bail hearing. For the past hour, the magistrate Desmond Nair has been holding forth, explaining why he won't allow cameras in the courtroom, and tracing the etymology of the word "bail," prolonging his decision to a rapt courtroom (and international audience). The bail decision determines whether the double-amputee athlete can be freed before trial or if he must stay behind bars pending trial in the shooting death of his girlfriend.

The prosecution vehemently opposed bail to Chief Magistrate Desmond Nair in a case that has transfixed South Africans and brought international media attention on the nation's justice system and police capabilities.

Pistorius is charged with one count of premeditated murder inr the Feb. 14 killing of Reeva Steenkamp. He says he accidentally shot her, thinking she was a dangerous intruder inside his home, lurking in a toilet stall off his bedroom.

Pistorius' hands trembled as he said "good morning, your worship" as the session began in Magistrate's Court in Pretoria, South Africa's capital. For the first time in the hearing, two representatives of the Steenkamp family were present in court, sitting behind and to the left of Pistorius in the public gallery.

Prosecutor Gerrie Nel called Pistorius' version that he shot Steenkamp accidentally improbable and argued that Pistorius did not have to have planned the killing for days in advance for it to be premediated.

"He planned it that night when she (Steenkamp) locked herself in (the toilet)," Nel said in response to a question from the magistrate on why Pistorius hadn't staged a break-in at his home to make his story look more believable. "The fact that we have only one survivor of that tragic night is difficult for the state."

Pistorius' defense lawyer, Barry Roux, brought up culpable homicide as a possible charge for the first time in the case when answering questions from the magistrate.

"He did not want to kill Reeva. He had no intent to kill Reeva," Roux said as Pistorius began weeping again — like he has done for much of his bail hearing.

Roux said it was impossible for Pistorius, as famous as he is and with his prostheses, to escape South Africa before trial and bail should be granted.

"Let me tell you how difficult it is for this man to disappear from this world," Roux said.

Prosecutor Nel earlier countered that everyone, whether disabled or famous or otherwise different from the majority, should be treated equally under the law. Nel noted that WikiLeaks founder Julian Assange is famous but is now holed up in the Ecuadorean Embassy in London to avoid extradition to Sweden to face sex-related charges.

Nair, the magistrate, will decide if Pistorius can be freed with conditions or if he is held until trial. Pistorius faces the sternest bail conditions in South Africa because of the seriousness of the murder charge, meaning his defense lawyers have to prove there is an "exceptional" reason for him to be freed.

Stephen Tuson, an adjunct law professor at the University of Witwatersrand in Johannesburg and a practicing attorney, told The Associated Press that poor health, a weak state case or a disability could be reasons to grant bail to a person accused of murder. But the "exceptional" circumstances Pistorius would have to prove to be freed are not established absolutely by law and are applied considering the individual merits of each case.

"(The matter of exceptional reasons) is not defined," Tuson said. "We've had to have this concept expanded by the courts on a case by case basis."

Pistorius' defense has dedicated much of its argument in the bail hearing to questioning the state's case against Pistorius and trying to discredit the police investigation into Steenkamp's shooting. Lead investigator Hilton Botha was removed from the case Thursday following his bungled testimony for the prosecution and replaced by the South African police's top detective, Vinesh Moonoo — who was in court Friday.

Defense lawyer Roux also stressed Pistorius' disability Friday and said it was one of the reasons why he couldn't easily flee the country.

"He cannot, cannot go unnoticed through airport security," said Roux, adding that Pistorius also needs medical treatment for his stumps and has to have his prostheses adjusted on a monthly basis.

Pistorius' longtime coach Ampie Louw had said before proceedings began that he is considering putting his runner back in training if he is granted bail to allow him to "get his mind kind of clear."

Louw said he realizes that the Olympic athlete might not be emotionally ready to give any thought to running.

"The change is that he is heartbroken, that is all," Louw said in the courtroom, surrounded by reporters and television cameras. "For me it is tough to see that. Not to be able to reach out and sit next to him and say 'Sorry, man, it was a terrible accident.' But I cannot do it, I must just sit here in court and that's all.

"The sooner he can start working the better." said Louw, who was the person who convinced the double amputee to take up track as a teenager a decade ago.

He has been held at a police station in Pretoria since last week, but suspects who are denied bail are typically held in a prison.

Roux argued on Thursday that the evidence backs Pistorius' statement that he shot through a toilet door at his home because he mistook Steenkamp for an intruder, killing her by accident.

"I think there will be a level of shock in this country if he is not released (on bail)," Roux said in court.

Opposing bail, Nel argued that Pistorius was too willing to shoot. The prosecution says Pistorius planned to kill his 29-year-old girlfriend, a model and budding reality TV star, after an argument in the early hours of Valentine's Day.

"The reason you fire four shots is to kill," Nel said.

Louw said he might put Pistorius — who overcame the amputation of his lower legs as a baby to compete at last year's London Olympics — back on a morning and afternoon training routine if he is freed, believing it might help him to be able to run track again.

"You must give him space," the coach said.

with additional reporting by Katie McDonough

MORE FROM with additional reporting by Katie McDonough