The danger in hyping preschool 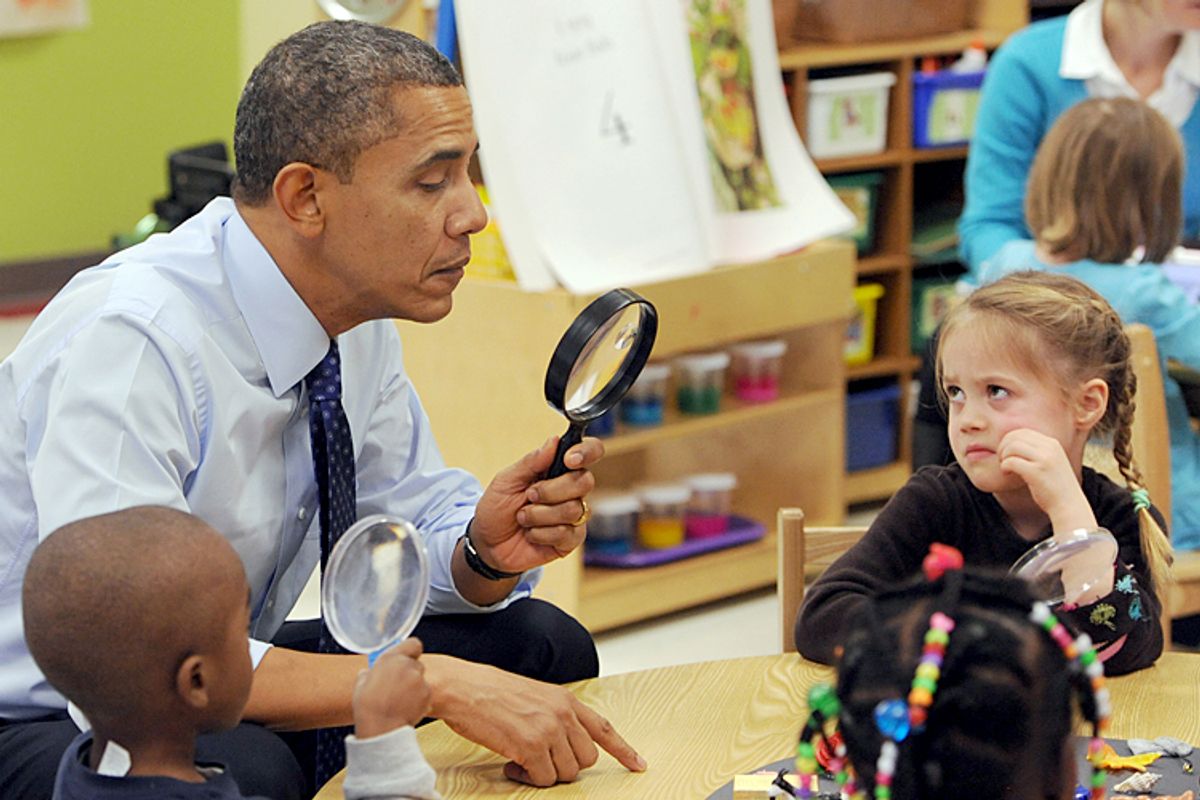 There’s a first time for everything, and this is the first time I’ve agreed even a tiny bit with conservative social theorist Charles Murray. His three big books, “Losing Ground,” “The Bell Curve” and 2012’s “Coming Apart” all make the case that social interventions to reduce poverty are doomed, because the keys to success are male-headed households, hard work and basic intelligence (which “The Bell Curve” argued was genetically determined, highest among white people, and mostly a matter of nature, not nurture).

So it’s not surprising that Murray takes a dim view of President Obama’s ambitious preschool program. What’s surprising is that I agree with one point he’s making, about the data the White House is using to sell the program. “Every dollar we invest in high-quality early education can save more than seven dollars later on – boosting graduation rates, reducing teen pregnancy, reducing violent crime,” Obama said in his State of the Union address.

This week not only Murray (writing in Bloomberg View) but Factcheck.org have criticized the numbers the White House presented to justify new state and federal investment in early childhood education. Now, to be fair, the president and his team have referred to a range of programs and studies to inform their preschool push. But the number that’s used most frequently and prominently is that $7 for every dollar spent that Obama introduced last week.

The pushback from Factcheck and Murray reactivated the problem I’ve had with the initiative since it was announced at the State of the Union: the research the president is using to sell it is too easily picked apart.

In his Bloomberg op-ed, “The Shaky Science of Obama’s Universal Pre-K Push,” Murray contends that ‘the evidence used to support the positive long-term effects of early childhood education is tenuous, even for the most intensive interventions. He notes that Obama’s $7 for every dollar spent comes from Nobel Laureate James Heckman’s research into two small hallmark early childhood programs from the 1960s, the Perry Preschool Project and the Abecedarian Project. Murray insists that the sample sizes in both projects are too small to safely assume that their admittedly impressive long-term gains can be produced by other, larger preschool programs – but I should say that it’s not only conservatives who harbor doubts about using those two programs as proxies to sell a nationwide preschool push. (Off the record I’ve had advocates tell me they winced a little at the big numbers the administration used to roll out the program.)

Like most conservative critics, Murray points to the Head Start program as something that might be considered a large-scale test of preschool’s efficacy, and dismisses it by pointing to a controversial 2011 HHS study that found any gains Head Start produces in kids wash out by the third grade.

Similarly, Factcheck.org says the president is “exaggerating” the likely social benefits of universal preschool. “Obama is extrapolating the results of small, expensive programs and applying them to universal state programs,” Factcheck’s Robert Farley wrote. He also pointed to the 2011 HHS study to dismiss claims that large-scale preschool programs could have effects like the small experimental programs. And he notes – correctly – that while state universal preschool programs in Oklahoma and Georgia have yielded some impressive school readiness gains, they haven’t been studied long enough to know if they’ll produce the kinds of life-changing results of the smaller programs Heckman studied – and there’s reason to believe they won’t. They’re worth doing nonetheless, especially for low-income kids, in that they improve school readiness and achievement, but they’re unlikely to yield that 7 to 1 benefit: cost ratio.

Now, James Heckman is a Nobel Laureate economist; Murray is a glorified pundit based at the American Enterprise Institute, not a university, and the Nobel Laureate has been energetic in defending his research as well as the overall thrust of Obama’s plan. In his response to Murray in the Boston Review, Heckman says that the small sample size in Perry actually makes the gains more impressive, not less, because they must be deep and genuine to have been captured in such a small group. “The fact that samples are small works against finding any effects for the programs, much less the statistically significant and substantial effects that have been found,” Heckman wrote. He also says that Murray was mistaken about the nature of the evaluations he wrote about and got details of other programs wrong.

And on Head Start, it’s true that the 2011 HHS study found limited gains that washed out by third grade. But other researchers, including Heckman, have criticized that HHS report. For one thing, it didn’t follow kids after third grade, and even if academic improvements faded in the early grades, it’s possible a longer-term study would have found social gains. “All the long-term studies [of Head Start] have shown better outcomes in school completion, health, income and social behaviors,” says Kris Perry of the First Five Years Fund, including lower dropout rates, higher incomes and better overall health for adults who went through the program as preschoolers. The HHS study also failed to marshal a genuine “control group,” so many of the non-Head Start kids attended other kinds of preschool programs that may even have been more expensive and higher quality than Head Start.

Still, even advocates don’t deny Head Start’s uneven quality. The average teacher makes $21,000, and less than a third of them have a teaching credential. Republicans love to talk about how poorly Head Start performs while resisting adding the funds that would improve it. Obama has gotten tough with underperforming local Head Start programs, canceling contracts for some and requiring improvements for many. It’s worth noting that while his new initiative promises to continue that quality push, it’s only putting new funds into “Early Head Start,” a project for infants and toddlers, indicating that it may be seeing new programs for preschoolers coming from schools and not Head Start.

Yet even James Heckman is concerned that the White House seems to be using his “$7 for every dollar spent” research to pitch a universal pre-kindergarten program for four-year-olds that won’t have nearly the impact of interventions like Perry Preschool. “I would be cautious,” the economist told Wonkblog’s Dylan Matthews. “The state programs have relatively short-term evaluation plans… they’re not randomized controlled trials, so I’m a little cautious. I don’t find them as convincing.”

Of course having Murray quarrel with someone’s data is rich, a classic pot v. kettle matchup, given all the problems scholars found with the data in “Losing Ground” and “The Bell Curve.” (In the Boston Review, Heckman seems a little peeved that he has to even dignify Murray’s criticism with a reply.) The conservative author has learned from the racial backlash to his earlier work – he’s softened his language about IQ being immutable, largely because of overwhelming research showing that it’s quite mutable. He’s also learned to write in a tone of voice that displays great concern about and empathy for the poor.

But he betrays his right-wing social agenda in his preschool critique:

Is there anything that money can buy for these children? I am sure that Head Start buys some of them a few hours a day in a safer, warmer and more nurturing environment than the one they have at home. Whenever that’s true, I don’t care about long-term outcomes. Accomplishing just that much is a good in itself. But how often is it true? To what extent does Head Start systematically fail to serve the children who need those few hours of refuge the most?

Asking those questions forces us to confront a reality that politicians and other opinion leaders have ducked for decades: America has far too many children born to men and women who do not provide safe, warm and nurturing environments for their offspring – not because there’s no money to be found for food, clothing and shelter, but because they are not committed to fulfilling the obligations that child-bearing brings with it.

This head-in-the-sand attitude has to change. If we don’t know how to substitute for absent, uncaring or incompetent parenting with outside interventions, then we have to think about how we increase the odds that children are born to present, caring and competent parents.

Where to start: We know from “Coming Apart” that Murray believes that “increasing the odds” that children are born to prepared parents involves slashing social programs and coercing marriages, preferably in “traditional,” male-dominated households. The solution, he says, isn’t preschool, but active fathers – and fathers who haven’t been driven away by self-sufficient mothers.

A man who is holding down a menial job and thereby supporting a wife and children is doing something authentically important with his life. He should take deep satisfaction from that, and be praised by his community for doing so. If that same man lives under a system that says the children of the woman he sleeps with will be taken care of whether or not he contributes, that status will go away…

There are genetic reasons, rooted in the mechanisms of human evolution, why little boys who grow up in neighborhoods without married fathers tend to reach adolescence not socialized to the norms of behavior that they will need to stay out of prison and hold jobs…. [Liberals] will have to acknowledge that the traditional family plays a special, indispensable role in human flourishing and that social policy must be based on that truth.

So Murray’s venture into the realm of evaluating social interventions is a little disingenuous, since he starts from a place of believing such interventions won’t make a difference, anyway. Obama will never win over Charles Murray, but public support for the spending and social optimism a new preschool push requires can be placed at risk with too much hype. I don’t agree with everything Daniel Patrick Moynihan ever said about social policy, but he was absolutely right when he said in 1968: “The great liberal failing” was “constantly to over-promise and to overstate, and thereby constantly to appear to under-perform.” In what may be a new moment for liberalism, we have to avoid that mistake.