Killing people of color just for being a suspected threat is a total outrage for liberals. Well, sometimes 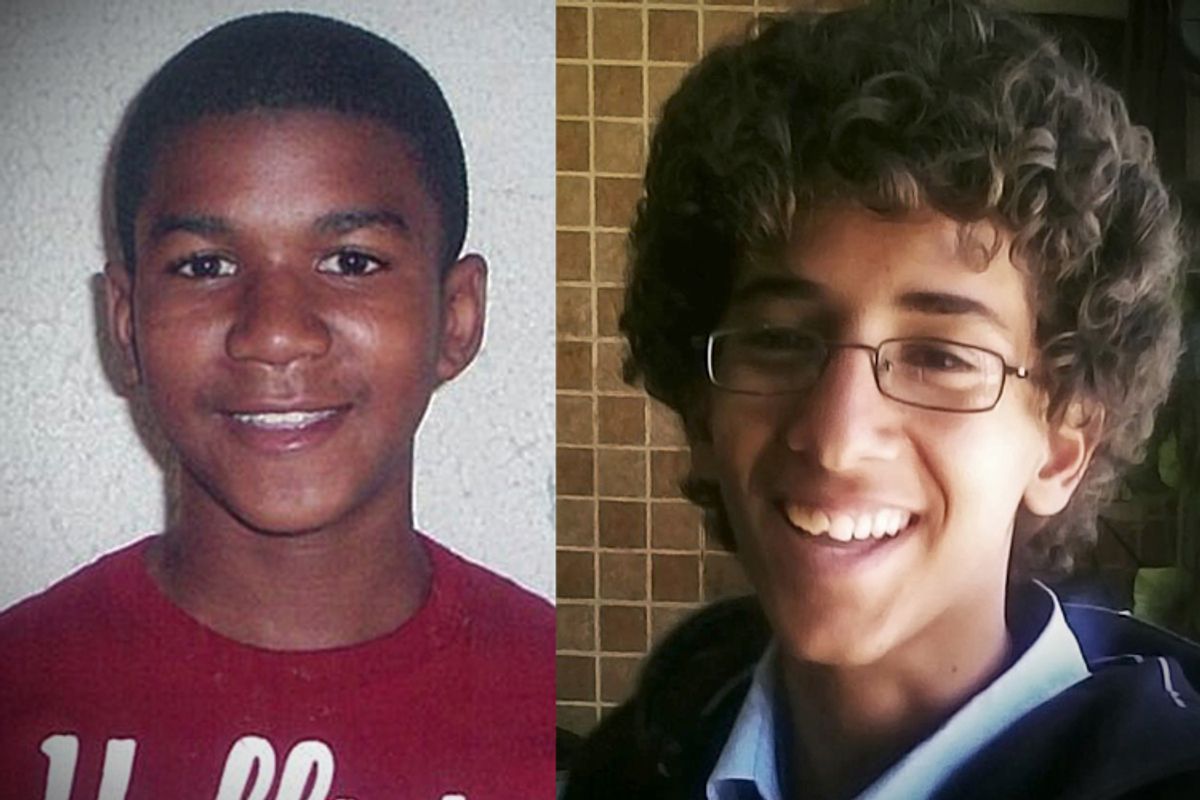 Since the reelection of President Obama, liberals have made some bold admissions. Commentators like Touré Neblett of MSNBC’s The Cycle have enthusiastically and repeatedly defended the president’s authority to launch drones against anyone, including American citizens, if he suspects that they are “trying to kill us.”

At no point in his several defenses did Touré reconcile his position with once-popular Constitutional precepts that every person should be presumed innocent until proven guilty, and know the charges and evidence against him, and have the right to a fair trial. Neither did he explain why ordinary Americans should suspend their longstanding skepticism of politicians in power or withdraw the demand that the president and Congress be accountable for their actions, especially the taking of someone’s life.

Sadly, Touré isn’t alone in trusting the president’s complete discretion to decide which individuals are threats to American safety. Other liberals, from Michigan governor Jennifer Granholm, to Touré’s MSNBC colleague Krystal Ball, to liberal bloggers also admit to a higher level of comfort with President Obama’s overseeing of otherwise troubling policies such as secret kill lists, targeted killings, and preemptive detentions of suspected terrorists. They are joined by 54% of Americans, who agree that the Obama Administration should have the discretion to kill anyone alleged to be senior al-Qaeda members.

The hoopla has been described by other pundits, liberal and conservative, as hypocrisy or, more accurately, shameless political double standards. Why exculpate a Democratic president for the same troubling, and extrajudicial, policies once engaged in by a Republican president? They’re right, of course. But there’s another double standard to worry about: one that assumes brown/black foreigners shouldn't receive the same benefit of the doubt about their guilt that is regularly given to other Americans. It can only be ascribed to a racial double standard, one consistent with an aggressive jingoism.

The same racial double standard is exemplified by the deep American indifference to the fact that the subjects of targeted killings, kill lists, no-fly lists, preemptive detentions, and FBI-led entrapments are almost always brown and black foreign nationals, despite the murkiness of the reasons for which the U.S. designates someone a terrorist. As Scott Shane of the New York Times describes in this PBS interview, the criteria by which names are placed on various kill lists or drone lists vary. Regarding drone strikes, although the Administration suggests that they only target members of al-Qaeda, neither they nor the CIA have felt a need to provide evidence of this. We know generally that an able-bodied, military-age male, who is 16 or older, in the “strike target area” constitutes a legitimate target. And that criterion is fairly shaky to begin — or end — with.

When the casualties are young kids taking part in a wedding celebration in Yemen, the indifference is reflected in the claim that their deaths are accidental. Collateral damage. Despite the inaccuracy of the term, most liberals buy the answer.

The American indifference turns to murmurs of indignation when the casualties are 16-year-old American kids who are the sons of irresponsible fathers, in the inspiring comments of presidential advisor Robert Gibbs (see this link beginning at 2:08). Sometimes, the indifference turns into a derisive cheer when it turns out that the targets of assassinations are brown American citizens. In the inspiring words of Touré, those Americans who join al-Qaeda “should be killed.” And they certainly “shouldn’t expect Constitutional protections.” Yet there is widespread evidence that American Muslims make up a negligible percentage of suspected terrorists.

The racial double standard is exemplified in the general American indifference over the deaths of foreign nationals or brown American citizens, in contrast to the rightful outrage over the needless killings of many other young African American men and women — from Trayvon Martin to the multiple state-led attempts to execute Warren Hill, a mentally disabled prisoner on death row in Georgia, and Hadiya Pendleton, a recent victim of gun violence.

Racism is unacceptable for American liberals. But many critics of racism are surprisingly comfortable with a jingoist foreign policy, even when it includes the deaths of Pakistani and Yemeni toddlers. Jingoism is just another word for extra-national racism, made acceptable by the constant references to American safety and freedom. The ubiquitous existence of the U.S. Homeland is evoked through the Orwellian Department of Homeland Security, whose function of policing the borders hardly repels the troubling resonance with the German homeland. We see further iterations of the Homeland on a daily basis, from DHS’s “See Something, Say Something” public campaign (the DHS video is a must-see, especially for its scary music and self-conscious inversion of racial stereotypes of terrorists and victims) to its federally imposed Secure Communities program. Both gratuitously justify racial suspicion as an integral part of national security and mutually reinforce the message that America is under radical threat at the national and local levels. Those messages are entrenched in the DHS’s massive deportation of 1.5 million immigrants under a Democratic president, and its periodic use of undocumented migrants as target practice. Indeed, that is the Department of Homeland Security’s figurative and functional purpose: the constant symbolic, penal, and lethal reinforcement of the boundaries of the Homeland.

We see reinforcement of the Homeland ideal in other dimensions as well, such as in the profiling of Latinos and other dark populations in the anti-immigration laws of various states. The latest expression of the Homeland can be seen in the newly minted partnership between Yale University and the Department of Defense. Giving each partner a mutual elite imprimatur, they will jointly host a training center where US Special Forces agents will learn new interrogation techniques by experimenting upon the dark immigrant residents of New Haven. The director of the center will be psychiatry professor Charles Morgan, who, as Democracy Now reports, previously conducted research on how to tell whether Arab and Muslim men were lying.

Over the last decade, the Homeland has become an explicit framework that normalizes the militarization of society — especially for darker men and women, who have become used to having their dignity violated through requests for their ‘papers,’ or by being subjected to questioning or frisks at airports and on city streets. Through the Homelandish mindset, many Americans have become immune to the need to respect the humanity and lives of dark foreigners.

After 11 years of vigorously reinforcing those boundaries internally and externally, we’ve forgotten that killing folks outside our nation — without accountability and compelling evidence — amounts to an aggressive xenophobia, which is a heinous racism hiding behind the pretense of “national security.”

"…The values on the other side are not there. This is their life's work to go to heaven — not to put down their beliefs, but the fact is, we don't have a shared respect for life."

Which "they"? Which "we"? Someone needs to remind Rep. Pelosi of sociologist Charles Kurzman’s findings, cited in multiple news sources, in which he points out that radical Muslims pose little threat to Americans. Others, such as Glenn Greenwald, have pointed out that continual extrajudicial killings and other aggressive foreign policies engender much more hostility, hatred and violence than they quell.

It is reminiscent of the conservative logic behind the wars in Iraq and Afghanistan. The same logic was spouted by Army Lt. General William Boykin, a senior Pentagon official under the Bush Administration. In 2003, he defended the incursion into Iraq by insisting that “We are a Christian Nation leading a war against Satan.” Boykin’s phrase was reported by the New York Times as having been praised by Donald Rumsfeld, then defense secretary.

When liberals uncritically parrot the racist responses given by conservatives, what is left to differentiate ourselves? Pelosi’s response is a microcosm of a larger liberal issue: the tendency of racially progressive liberals to accept troubling policies like the kill list and targeted killings when they learn of the president’s support for them.

“[W]e also should ask ourselves the question recently posed on twitter by @public_archive: 'Trayvon was executed because of a perceived threat; US launches target assassinations because of perceived threats. Both are somehow legal?'” Unfortunately, they are.

“We should be outraged at all of these deaths. Trayvon Martin, Adbulrahman al-Awlaki, his cousin, and the countless civilians — so-called terrorist targets — who are victims of a US policy of drone strikes and who have no recourse to the law, and no appeal to human decency.”

I would add: We should be vigorously challenging the racial double standard implicit in the endorsement of Obama Administration policies such as kill lists, targeted killings, and other clearly racist foreign policy measures. We should be demanding proof of guilt rather than placing blind faith in any president’s demand for unilateral authority or discretion.

“Our righteous indignation and anger over the Trayvon Martin murder has to stretch beyond our community to consider a global humanity — and especially the nonwhite victims of US militarism and racism. We must pause and reflect on the injustice of the US government’s extrajudicial assassinations, and the fact that the Obama administration has claimed the right to kill people in multiple countries around the world whenever it wants.”

Skepticism, not trust, is needed in the face of the current administration’s national security and counterterrorism policies. Liberals must start to become more critical of the constant warnings about a "wolf" in "national security" clothing. Just because a president they like is calling for targeted killings doesn’t make the policy any less troubling — politically or racially.