The brief, wondrous life of an Oscar gown

Need to get red carpet glamourous? It takes a village 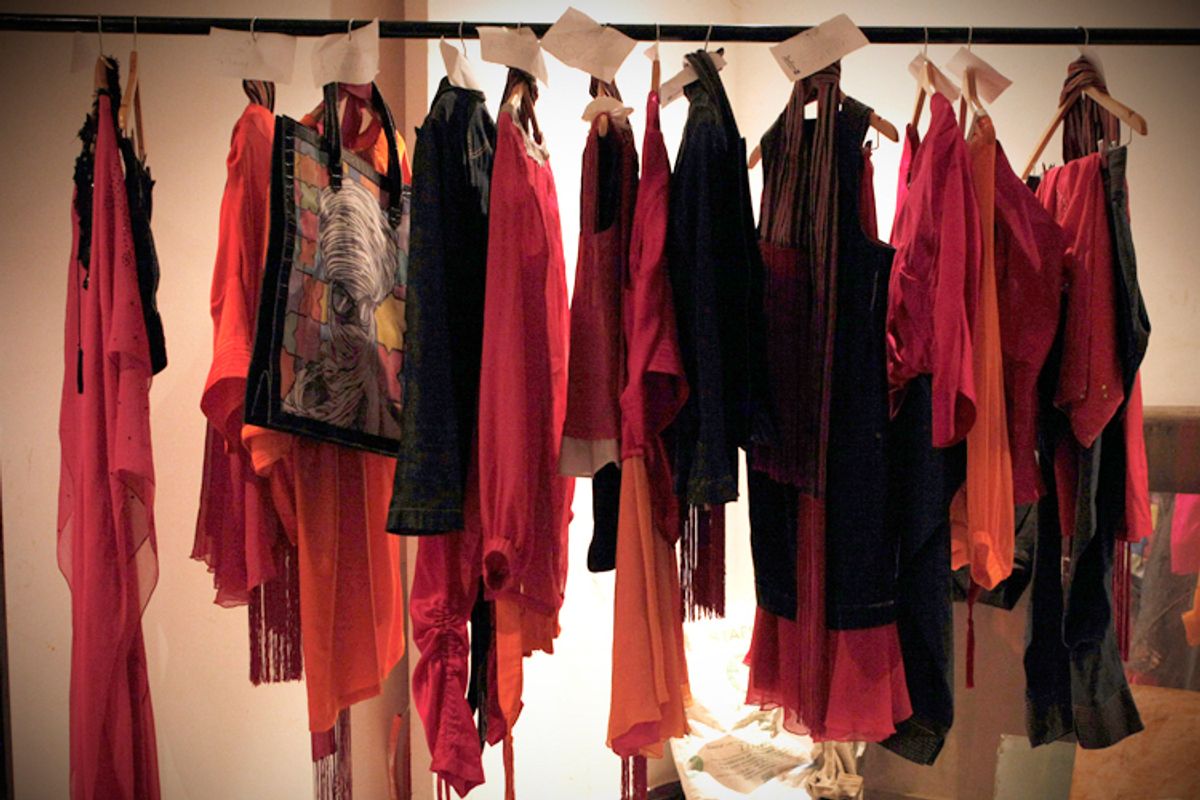 So maybe you spent the better part of last year eating oatmeal paste (or practicing the world's best-ever dance sequence), and your efforts paid off. You've been showered with trophies since awards season started back in January, and now it's time for the big finale.

The impression you make at the Academy Awards is going to matter. And while you've worked hard to advance your career, been selective with roles and have only done nudity when it "made sense for the character," a spot on the best-dressed list never hurts, either.

An iconic gown on the big night can separate the Meryl Streeps from, well, the not-Meryl Streeps.

So you employ a stylist, and he or she enlists a team. And there begins a dizzying constellation of designers, ateliers, tailors, assistants, hair and makeup artists and messengers, all working in service of something bigger than themselves: You.

Time to get ready.

It's no secret that the red carpet is big business for designers. With millions tuning in to watch the pre-show coverage, having a star walk the carpet in one of your creations can make a career. "It’s an incredible boost for the company that dresses the star," says Jeffrey Monteiro, former design director of Mayle, Derek Lam, and Bill Blass who has outfitted stars like Eva Mendes and Elizabeth Banks for awards season. "Their name is circulated continually with it."

To put their name in the red carpet running, designers ship dress samples off with P.R. agencies after nominees are announced in January, where they are showcased in expensive hotel suites and showrooms across Los Angeles. Along with dresses pulled straight from the runways at Fashion Week, stylists comb hundreds of racks of couture in search of the perfect statement gown, the one that tells the story and projects the image they want for their client. "Millions of people are looking," Monteiro says. "An actress can be beautiful and have done some great roles," but still flop if she shows up wearing a dress that doesn’t work for her.

If a designer has seen a celebrity wear one of his pieces before, he will often try to reach out to her stylist and offer to custom a dress or modify an existing design, according to Monteiro.

But if you're going to do custom, you better move fast.

Between sourcing fabrics, and beadwork that can take up to 500 hours to do by hand, a team of highly skilled pattern makers, cutters and seamstresses will work around the clock preparing a one of a kind, museum-worthy garment.

Ateliers will use a star's measurements to create the dress sample, using an army of assistants and messenger services to ferry it to the celebrity. "I’ve had situations where an actress is shooting and you’re given half an hour between scenes to fit the dress in a closet – or a hallway. Wherever it can get done," Monteiro says. But, "sometimes you’re just making a dress from measurements and pictures. You never see the actress. You send it off and hope it works."

It can take a month -- if you have a month. If you don't? "One time -- for someone we were dressing for the Golden Globes, actually -- the celebrity was flying out at 7 in the morning and the dress was finished at 5 a.m. There was a team of us working on the dress and then an assistant jumped into a cab and dropped it at the stylist’s house -- maybe a half an hour before she was leaving for the airport."

The gown passes through dozens of hands, and will see weeks of all-nighters before the finished product reaches the stylist, and even then, it's no guarantee it will make it to the red carpet.

"You send a dress sometimes and, because they have five or six options, depending on the day or what the weather’s like and they’re like, 'Oh, I don’t think that color works on me anymore!' Or they change their hair or their lipstick," Monteiro says.

Often, designers won't know if their gowns have made it onto the carpet until they tune in with the rest of the world.

Monteiro, again: "You never know! It becomes this little dance."

The celebrity might be the star, but the stylist is the woman (or man) behind the curtain. More than just working with a client to select a dress, the stylist is responsible for executing a vision on Oscar night. Stylists are storytellers, and the story they want to tell is: Hello, let me introduce you to Hollywood's next BFD. (For translation, please see here.)

Jessica Paster, a stylist for the likes of Cate Blanchett, Jennifer Aniston and Emily Blunt, is a seasoned veteran of BFD-ing. She spoke with Salon two days before the big night, and she was in the thick of it.

"I don't even want to tell you. I'm going to be working about 110 this week alone. Last week I probably worked 80," she said.

This year, with her trusty assistant gone and an eager, if inexperienced new team helping out, she's doing most of the dirty work herself, she said. And it's about so much more than the dress. "Did we order the Commandos? Do we have enough Spanks? Do we have foot pedals? Oh my god, we need those bra straps!" are just some of the details she says she's dealing with.

When asked about a typical day, Paster sums up her Friday morning and early afternoon:

"We have a board and we're going to write down every person we're dressing for Sunday, Saturday and tonight. My first fitting is at 9 in the morning, and I have to get one of my girls to go to a client's house before that because the shoes that one client wore to an event yesterday now need to be given -- not one of my clients -- but another person's client who is going to a party tonight. Then we make a list and email all of the people we still need dresses from because we have at least three or four fittings to go. I also woke up to an email from a client saying, 'I don't think I can wear this dress.' So now I need to figure out where in my schedule I'm going to put her.

Then I come back to drop dresses because I do not want dresses in my car because god forbid someone breaks into my car and steals the dresses."

That puts us at around 1 p.m., and Paster's day will run well past 10 p.m. It has caused her a fair amount of fatigue: "Each and every one of us is evented out. As much excitement we have for Sunday night, we are just as thrilled this is the last one."

Things might calm down for star and stylist come Sunday, when decisions about shoes, jewelry and dresses have been finalized, but on Monday and Tuesday, it's right back to the chaos, Paster says.

Despite the glitz and glamour of the red carpet, the red carpet experience comes with some Cinderella-style strings, except for a very hallowed few. Most stars are expected to return their dresses -- the frocks that dozens of people spent weeks tailoring perfectly to their bodies -- from whence they came.

"Monday and Tuesday are the most insane days. We need to collect everything. The people who are happy with you are not going to annoy you about the return, but the people who are mad that you didn't place something are going to want their shit ASAP," according to Paster.

And so, for at least another two days, the buildup to the red carpet happens all over again -- except in reverse.

Then, these dresses that have been splashed across magazine covers, littered the pages of thousands of style blogs and are most likely being knocked off at that very moment ... simply return to the archives, where they'll often stay forever.