The Romans did not target, hunt or massacre Jesus' followers, says a historian of the early church 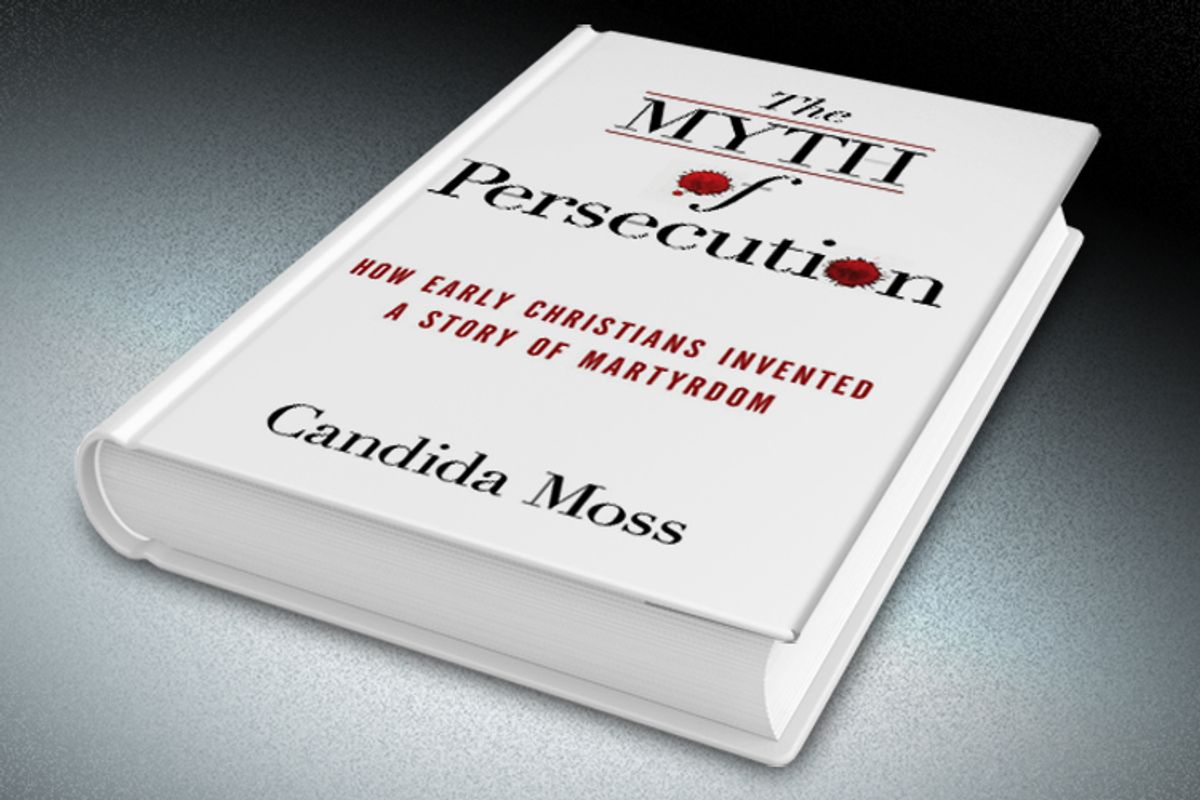 In the immediate aftermath of the Columbine High School massacre, a modern myth was born. A story went around that one of the two killers asked one of the victims, Cassie Bernall, if she believed in God. Bernall reportedly said "Yes" just before he shot her. Bernall's mother wrote a memoir, titled "She Said Yes: The Unlikely Martyrdom of Cassie Bernall," a tribute to her daughter's courageous Christian faith. Then, just as the book was being published, a student who was hiding near Bernall told journalist Dave Cullen that the exchange never happened.

Although Candida Moss' new book, "The Myth of Persecution: How Early Christians Invented a Story of Martyrdom," is about the three centuries following the death of Jesus, she makes a point of citing this modern-day parallel. What Bernall truly said and did in the moments before her death absolutely matters, Moss asserts, if we are going to hold her up as a "martyr." Yet misconceptions and misrepresentations can creep in so soon. The public can get the story wrong even in this highly mediated and thoroughly reported age -- and do so despite the presence among us of living eyewitnesses. So what, then, to make of the third-hand, heavily revised, agenda-laden and anachronistic accounts of Christianity's original martyrs?

Moss, professor of New Testament and early Christianity at the University of Notre Dame, challenges some of the most hallowed legends of the religion when she questions what she calls "the Sunday school narrative of a church of martyrs, of Christians huddled in catacombs out of fear, meeting in secret to avoid arrest and mercilessly thrown to lions merely for their religious beliefs." None of that, she maintains, is true. In the 300 years between the death of Jesus and the conversion of the Emperor Constantine, there were maybe 10 or 12 scattered years during which Christians were singled out for supression by Rome's imperial authorities, and even then the enforcement of such initiatives was haphazard -- lackadaisical in many regions, although harsh in others. "Christians were never," Moss writes, "the victims of sustained, targeted persecution."

Much of the middle section of "The Myth of Persecution" is taken up with a close reading of the six "so-called authentic accounts" of the church's first martyrs. They include Polycarp, a bishop in Smyrna during the second century who was burned at the stake, and Saint Perpetua, a well-born young mother executed in the arena at Carthage with her slave, Felicity, at the beginning of the third century. Moss carefully points out the inconsistencies between these tales and what we know about Roman society, the digs at heresies that didn't even exist when the martyrs were killed and the references to martyrdom traditions that had yet to be established. There's surely some kernel of truth to these stories, she explains, as well as to the first substantive history of the church written in 311 by a Palestinian named Eusebius. It's just that it's impossible to sort the truth from the colorful inventions, the ax-grinding and the attempts to reinforce the orthodoxies of a later age.

Moss also examines surviving Roman records. She notes that during the only concerted anti-Christian Roman campaign, under the emperor Diocletian between 303 and 306, Christians were expelled from public offices. Their churches, such as the one in Nicomedia, across the street from the imperial palace, were destroyed. Yet, as Moss points out, if the Christians were holding high offices in the first place and had built their church "in the emperor's own front yard," they could hardly have been in hiding away in catacombs before Diocletian issued his edicts against them.

This is not to deny that some Christians were executed in horrible ways under conditions we'd consider grotesquely unjust. But it's important, Moss explains, to distinguish between "persecution" and "prosecution." The Romans had no desire to support a prison population, so capital punishment was common for many seemingly minor offenses; you could be sentenced to be beaten to death for writing a slanderous song. Moss distinguishes between those cases in which Christians were prosecuted simply for being Christians and those in which they were condemned for engaging in what the Romans considered subversive or treasonous activity. Given the "everyday ideals and social structures" the Romans regarded as essential to the empire, such transgressions might include publicly denying the divine status of the emperor, rejecting military service or refusing to accept the authority of a court. In one of her most fascinating chapters, Moss tries to explain how baffling and annoying the Romans (for whom "pacifism didn't exist as a concept") found the Christians -- when the Romans thought about them at all.

Christians wound up in Roman courts for any number of reasons, but when they got there, they were prone to announcing, as a believer named Liberian once did, "that he cannot be respectful to the emperor, that he can be respectful only to Christ." Moss compares this to "modern defendants who say that they will not recognize the authority of the court or of the government, but recognize only the authority of God. For modern Americans, as for ancient Romans, this sounds either sinister or vaguely insane." It didn't help that early Christians developed a passion for martyrdom. Suffering demonstrated both the piety of the martyr and the authenticity of the religion itself, and besides, it earned you an immediate, first-class seat in heaven. (Ordinary Christians had to wait for Judgment Day.) There were reports of fanatics deliberately seeking out the opportunity to die for their faith, including a mob that turned up at the door of a Roman official in Asia Minor, demanding to be martyred, only to be turned away when he couldn't be bothered to oblige them.

Moss cannot be called a natural or fluent writer, but she is thorough, strives for clarity and is genuinely fired up in her concern for the influence of the myth of martyrdom on Western societies. "The idea of the persecuted church is almost entirely the invention of the 4th century and later," she writes. This was, significantly, a period during which the church had become "politically secure," thanks to Constantine. Yet, instead of providing a truthful account of Christianity's early years, the scholars and clerics of the fourth century cranked out tales of horrific, systemic violence. These stories were subtly (and not so subtly) used as propaganda against heretical ideas or sects. They also made appealingly gruesome entertainment for believers who were, personally, fairly safe; Moss likens this to contemporary suburbanites reveling in a horror film.

Today, polemicists continue to use the deeply ingrained belief in a persecuted -- and therefore morally righteous -- church as a political club to demonize their opponents. Moss sees a direct link between the valorization of martyrs and preposterous right-wing rhetoric about the "war on Christianity." It's a tactic that makes compromise impossible. "You cannot collaborate with someone who is persecuting you," Moss astutely points out. "You have to defend yourself."

Where she is less shrewd is in her belief that by exposing the "false history of persecution," we can somehow purge this paranoid approach to political differences. One of the most enlightening aspects of "The Myth of Persecution" is Moss' ability to find contemporary analogies that make the ancient world more intelligible to the average reader, such as the Cassie Bernall story. But that story has an additional lesson to offer, about the true believer's imperviousness to unpalatable facts. Bernall's family and church are unmoved by the schoolmates who were present at the shooting and who have debunked the "She said yes" legend. "You can say it didn't happen that way," the Bernalls' pastor told one reporter, "but the church won't accept it. To the church, Cassie will always say yes, period."

Christianity Editor's Picks Nonfiction The Myth Of Persecution What To Read