Twelve TV weddings that made us awww and guffaw

"Parks and Recreation's" Leslie and Ben finally got hitched! Here are other favorite sitcom strolls down the aisle 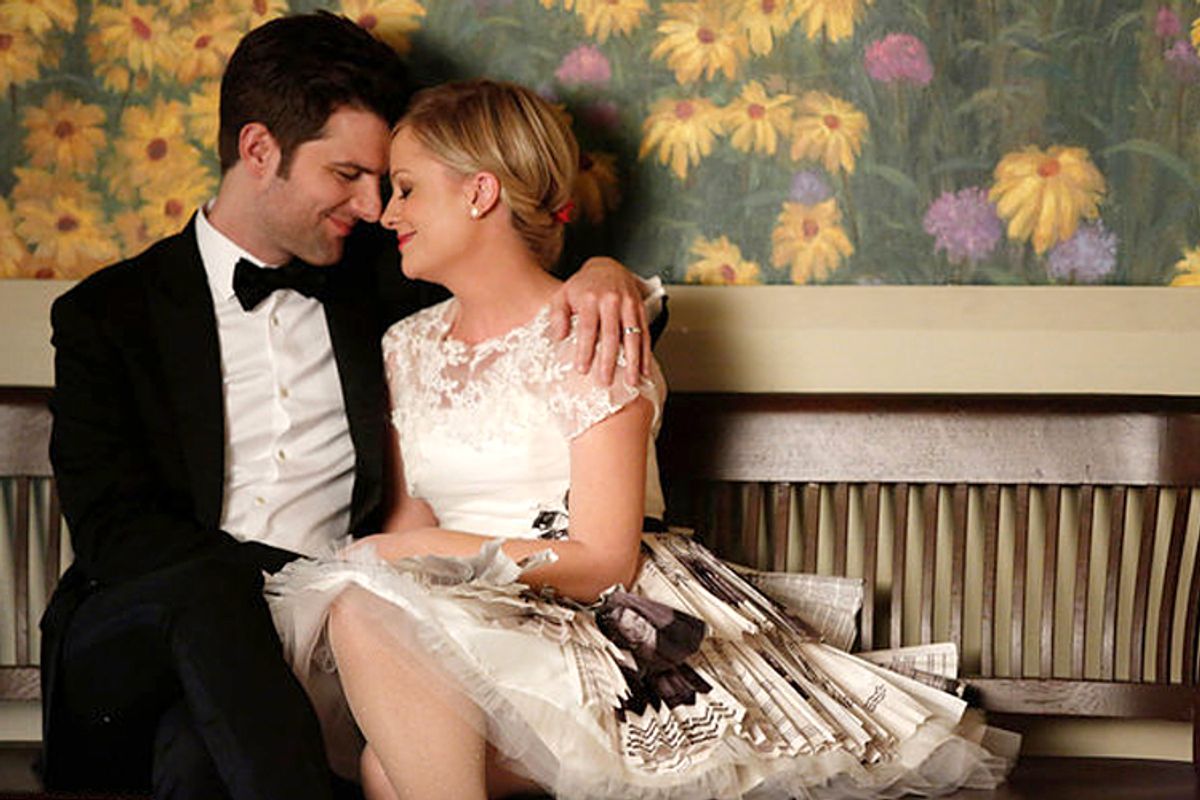 This past week on "Parks and Recreation," Leslie Knope and Ben Wyatt got married. In keeping with the other weddings that "The Office"-"Parks and Recreation" brain trust have written (See: Jim and Pam, Andy and April) it was a very sweet, aww-worthy affair, complete with vows (not, thankfully Leslie's 70-page version), candles, heavy drinking and a good kiss. On the occasion of the Knope-Wyatt nuptials,  a look at some of TV's other funniest weddings. (Note the funniest: We're eschewing famous drama weddings here.)

The major difference between the American “Office” and the British “Office” is a matter of heart: The American “Office” has a lot of it, a big sentimental, sweet streak that the British “Office” would have scoffed at. So despite being about a dozen dysfunctional weirdos stuck in dead-end jobs, “The Office” has always been aces at romance, the adorable, sweet, funny kind. Nowhere was this more evident than Jim and Pam’s wedding, which took place both on a boat in Niagara Falls, just the two of them, and at a more public ceremony where their colleagues ripped off a viral video. This is the only instance it's totally fine to tear up, in a squishy way, at a Chris Brown song.

Ross’s ill-fated marriage to Brit Emily infamously began with him botching his vows, accidentally inserting Rachel’s name for Emily’s, with an “I take thee, Rachel.” It’s probably the cleverest way to derail a wedding in TV history: No one has to speak now or forever hold their peace. The groom just screws himself with an unexpected, very funny snafu that dooms his marriage to Emily before it even starts.

Lest ye think "Parks" invented the hurry-up wedding, on "The Mary Tyler Moore Show" Georgette's had enough waiting and convinces Ted to get married that very day. Georgette wears a veil and a regular dress, Ted gets a prompt for his vows, and John Ritter performs the ceremony in tennis shorts, and needs help remembering the groom's name, and it's all aged very, very well.

In the eighth season of the series, Roseanne plans a gay wedding for her boss, Leon, and his partner, Scotty, complete with drag queens, Sandra Bernhard, and strippers. Leon freaks out, contends he might not be gay since he’s a Republican who hates Barbra Streisand, only to be reminded by Roseanne that he does indeed like having sex with guys. (“But do you like having sex with men? GAY!") The wedding’s even kind of sweet, and ahead of its time.

5. "Parks and Recreation, " April and Andy

Even though they’d only been dating for a brief time, April Ludgate and Andy Dwyer knew they were perfect for one another. So they threw a surprise wedding, complete with a Colts jersey for the groom, dead pigeons and the sweetest vows (“I hate everything, but I never seem to hate you”). Leslie had her doubts, but even she got melted by young, dumb, totally true love.

6. "Keeping Up With the Kardashians" (and related reality TV series), Kim Kardashian and Kris Humphries

This one's humor is way dark: Kim Kardashian and Kris Humphries make a fortune having their "fairy tale" wedding on television. Soon thereafter the whole thing disintegrated, on television, because it was rushed and crass to begin with, a marriage born of publicity and cash and attention rather than real love. The joke was on the audience.

Marrying Liz Lemon off was a complex maneuver for “30 Rock”: How to do it without undermining Liz and the show? How to do it and still be “30 Rock” — wacky, unsentimental, self-lacerating? Answer: put Liz in a Princess Leia dress, get rings from a police auction, and have Jack Donaghy read some Ayn Rand. Perfect.

“Happy Endings” took a while to find its groove, but in retrospect, the pilot episode, in which Alex dumped Dave at the altar, had some telltale “Happy Ending"-isms. The guy breaking up the wedding is wearing roller blades; to make himself feel better, Dave listens to the Indigo Girls’ “Closer to Fine”; and Alex gets cornrows.

9. "The Office," Phyllis and Bob Vance

Before there was Jim and Pam, there was Phyllis and Bob Vance, of Bob Vance refrigeration. Their wedding had less heart — though it’s still in there — and a lot more Michael Scott than Jim and Pam’s nuptials. Michael tries to make the wedding all about him: it’s cringe-y, but ultimately even he can't ruin the day.

An iteration of the classic wedding disaster: Dwayne Wayne can’t let his true love Whitley marry another guy, so he shows up at the wedding to convince her to be with him. His presence freaks Whitley out so much she goes into a very temporary dream state, and sends her mom into paroxysms of anger: But the right people get together in the end.

"Your dreams are not what you thought they'd be!" Jessa screams as she throws her garter at a crowd gathered for her very hasty wedding to money man Thomas John. Then everyone dances to "Pussy Be Yankin'." Not a marriage built to last, but a wedding to laugh at  anyway.

On their second wedding anniversary, Mike and Gloria and Ethel and Archie reminisce about the younger pair's wedding day, which almost didn't happen, after Archie blew up about Polish people. The sex talk between Ethel and Gloria — in which Ethel is too uncomfortable to say anything really — is something else too.
[slide_show id=13209008]