The Fox talker whines about the media's leftist bias. Has he forgotten the Bush years? 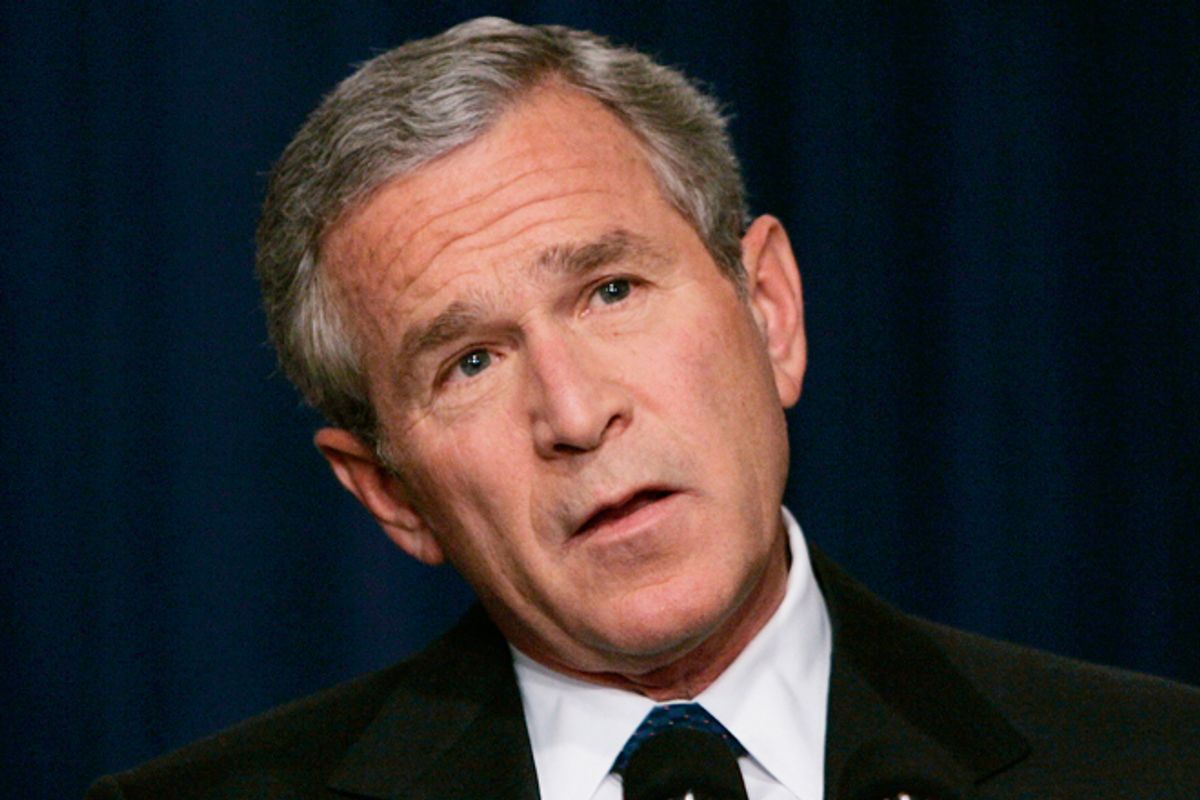 Perpetually fuming about President Obama, Sean Hannity widened his rant Wednesday night on Fox News and condemned the "lapdog, kiss ass media" that allegedly lets Obama have his way. Echoing the same attack, Karl Rove wrote in the Wall Street Journal this week that "Mr. Obama is a once-in-a-generation demagogue with a compliant press corps," while the anti-Obama Daily Caller pushed the headline, "Lapdog Media Seeking Lap To Lie In."

Complaining about the "liberal media" has been a running, four-decade story for conservative activists. But what we're hearing more of lately is the specific allegation that the press has purposefully laid down for the Democratic president, and that it's all part of a master media plan to help Democrats foil Republicans.

The rolling accusation caught my attention since I wrote a book called Lapdogs, which documented the Beltway media's chronic timidity during the previous Republican administration, and particularly with regards to the Iraq War. I found it curious that Hannity and friends are now trying to turn the rhetorical tables with a Democrat in the White House, and I was interested in what proof they had to lodge that accusation against today's press.

It turns out the evidence is quite thin. For instance, one never-ending partisan cry has been the press has "ignored" the terrorist attacks on the U.S. consulate in Benghazi last year; that they're protecting Obama. Yet the New York Times and Washington Post have published nearly 800 articles and columns mentioning Benghazi since last September, according to Nexis.

What the lapdog allegation really seems to revolve around is the fact that conservatives are angry that Obama remains popular with the public. Rather than acknowledge that reality, partisans increasingly blame the press and insist if only reporters and pundits would tell 'the truth' about Obama, then voters would truly understand how he's out to destroy liberty and freedom and capitalism.

Sorry, but that's not what constitutes a lapdog press corps. And to confuse chronic partisan whining with authentic media criticism is a mistake. The Hannity-led claim also isn't accurate. Studies have shown that during long stretches of his first term, Obama was  hammered with "unrelentingly negative" press coverage.

By contrast, the lapdog era of the Bush years represented nothing short of an institutional collapse of the American newsroom. And it was one that, given the media's integral role in helping to sell the Iraq War, did grave damage to our democracy.

Looking back at his tenure as Washington Post ombudsman, Michael Getler wrote in 2005 that the mainstream media's performance in 2002 and 2003 likely represented the industry's worst failing in nearly half a century. "How did a country on the leading edge of the information age get this so wrong and express so little skepticism and challenge?" Getler asked.

Let's recall some concrete examples of what helped the Bush era press rightfully earn its title of lapdogs so we can understand why today's conservative claims ring so hollow.

A defining trait of Bush's obsequious press corps was its collective refusal to take seriously anti-war voices prior to the preemptive invasion of Iraq, even voices such as Democratic party stalwart Sen. Ted Kennedy (D-MA). In September 2002, Kennedy made a passionate, provocative, and newsworthy speech raising all sorts of doubts about the war, doubts that would later prove well-founded. The event garnered exactly one sentence -- thirty-six words total -- of coverage from the Post.

The daily was hardly alone in turning away from Kennedy's prescient speech. The night of his address, Nightly News devoted just 32 words to it. On ABC's World News Tonight, it received 31 words, and on the CBS Evening News, 40 words.

Kennedy gave that speech on a Friday. Two days later the Sunday talk shows discussed Iraq in detail, but Kennedy's name never came up. For the network pundits, the anti-war speech from one of the nation's political giants basically did not exist. It was irrelevant to the around-the-clock media chatter about a looming war.

Given that tentativeness, it's not surprising that a survey conducted by the liberal media watchdog group Fairness and Accuracy in Reporting found that during the first two weeks of February 2003, when the debate about the war should have been raging on the public airwaves, just 17 percent of the 393 people interviewed on-camera for network news reports expressed "skeptical or critical positions" on Iraq.

Additionally, Media Matters found that while 23 percent of U.S. senators voted to oppose the war in the fall of 2002, only 11 percent of the senators invited to appear on the Sunday morning talk shows prior to the invasion were anti-war.

According to figures from media analyst Andrew Tyndall, of the 414 Iraq stories broadcast on NBC, ABC, and CBS from September 2002 until February 2003, all but 34 -- eight percent of the total -- could be traced back to sources from the White House, the Pentagon, or the State Department. Only 34 stories, or 8 percent or the reports, were of independent origin.

Meanwhile, given its current primetime lineup, sometimes it's hard to recall that in 2003 MSNBC was so nervous about employing a liberal host who opposed Bush's ordered invasion that it fired Phil Donahue preemptively, just weeks before war began. An internal memo warned that Donahue presented "a difficult public face for NBC in a time of war." (He was MSNBC's highest rated host at the time of his firing.)

Months worth of chronic timidity and newsroom bowing-down to the White House's war culture clearly helped pave the way to war.

Laying out the reasons for an unprecedented invasion during his final, pre-war invasion press conference on March 6, 2003, Bush mentioned al-Qaida and the terrorist attacks of September 11 thirteen times in less than an hour. Not a single journalist that night challenged the presumed connection Bush was making between al-Qaida and Iraq, despite the fact that intelligence sources had publicly questioned any such association.

Consisting of minutes from a July 23, 2002, meeting attended by then-Prime Minister Tony Blair and his closest advisers, the memo revealed their impression that the Bush administration, eight months before the start of the Iraq war in 2003, had already decided to invade and that American officials seemed more concerned with justifying a war than preventing one.

The blockbuster memo was leaked to the Times of London, which printed it on May 1, 2005. How did the American press respond?

Between May 1 and June 6, the story received approximately 20 mentions on CNN, Fox News, MSNBC, ABC, CBS, NBC and PBS combined, according to TVEyes. By contrast, during the same five-week period, the same outlets found time to mention more than 260 times the tabloid controversy that erupted when a photograph showing Saddam Hussein in his underwear was leaked to the British press.

In the five weeks following the memo being published in the Times of London, White House spokesman Scott McClellan held 19 daily briefings, at which he has fielded more than 900 questions from reporters, according to the White House's online archives. Exactly two of those 900 questions were about the Downing Street memo and the White House's reported effort to fix prewar intelligence.

That, unfortunately, is what a lapdog press corps looks like. Let's not diminish the significance of that historic failure by pretending today's Beltway press is repeating that catastrophic and unprecedented abdication under Obama. Just because Obama's most strident critics have failed to turn voters against the president doesn't mean the press isn't doing its job.