Working from home is a women's issue 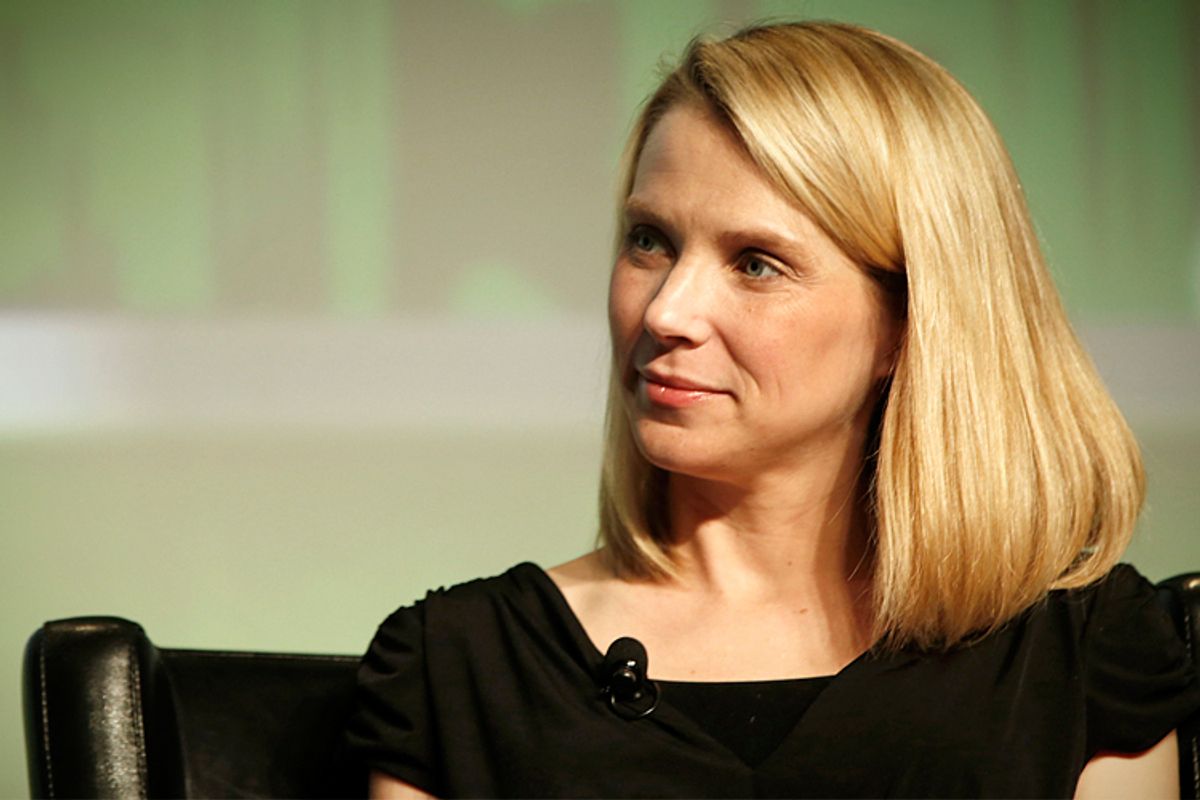 I don't have children, although someday I hope to, but I am a big fan of efficiency and changing from pajamas into pajamas. In other words, I am a fan of working from home, which is why I was dismayed to see that Yahoo!'s new-ish CEO, Marissa Mayer, has signed off on eliminating it as an option for her employees. This is about more than lifestyle or employee cohesion (or pajama pants). It's a deeply political move.

All Things D's Kara Swisher, who first reported on the memo and its protest-too-much assertions that this is about "fun," also notes that the new policy doesn't just extend to a few hundred customer service employees, but to "any staffers who might have arrangements to work from home just one or two days a week, too." That includes waiting for service and repair visits, and, presumably, other home responsibilities. In the name of morale and becoming "the absolute best place to work," Yahoo! is setting back the progress and flexibility that some employees have been able to enjoy. That not only belies contemporary realities and preferences -- including the fact that productivity is about a lot more than putting in hours -- but its impact falls disproportionately on women.

As Nancy Folbre, an economist and editor of “For Love and Money: Care Provision in the United States," told Salon last year, “Once upon a time, we lived in a world where men engaged in paid work and women stayed home and took care of the children, the elderly, the sick, and the disabled." That's not the world we live in now: Even in households with more than one adult, some form of paid work is rarely a "choice," and someone still has to do the care work, usually on top of everything else. That someone is usually a woman, which is why state and city-level policies for paid sick days and family leave -- the bare minimum of flexibility -- are feminist issues.

The policy change under Mayer comes just as her fellow Google alumna, and current Facebook chief operating officer, Sheryl Sandberg is about to publish a book on female leadership that kicks off with her using her clout at Google to get accommodations for pregnant employees. I'm wary of catfight-like oppositions between powerful women, the kind that cropped up in the recent New York Times piece on Sandberg's "Lean In" circles, between Sandberg and Anne-Marie Slaughter, whose stylistic and substantive differences seem frankly minuscule to me, whatever their personal issues. But the contrast here is palpable: One executive is extolling going home early even as she urges ambition; the other wants you to stay put, regardless of actual productivity, and the consequences be damned.

Mayer was subject to an absurd amount of scrutiny and concern-trolling over taking the big job while pregnant, and her response was to insist that she wouldn't take much time off at all. That's her prerogative, but this move suggests not only that she thinks what worked for her will be right for all of her employees, but that she wants to telegraph that she won't be soft on everyone just because she's female. In a now-notorious interview Mayer did for the forthcoming "Makers" documentary on PBS, Mayer said she doesn't think she's a feminist because she doesn't have "sort of the chip on the shoulder that sometimes comes with that. I think it's too bad but I think that feminism has become in many ways a more negative word." She added, "I think that there is more good that comes out of positive energy around that than negative energy." That implies that merely acknowledging discrimination and existing gender roles in the world, and trying to work with them, is allowing yourself to be defeated by them. But the true defeatism lies in thinking that you don't need policies that help everyone be able to participate, including working from home, and then wondering why your turnover is so high or your employees are so miserable.

Working from home or flexibility in general isn't a panacea, especially for low-wage workers, for whom "flexible hours" can mean the employer being capricious about hours or not providing enough of them, rather than more autonomy. And I get the desire to have employees bond in the flesh. But that has to be an opt-in, one greased by all those famously awesome perks on tech campuses, like free food and on-site leisure facilities. Some people will always prefer to work in an office for their own reasons, including maintaining a separation between work and home, or because their home is somewhere they'd like to get away from. But a one-size-fits-all workplace is one that is bad for people who can't drop everything for the water cooler.

My reasons for working from home happen to be selfish, and I happen to be able to avail myself of it because my work rarely requires physical presence, or any physical labor at all, unless typing counts as exertion. But "work-life balance" -- a terrible phrase that makes it sound like a luxury good rather than a just provision that improves productivity and morale -- only works when everyone feels like it's their problem. That includes the person at the top.