It may have been nice to see the youngest or oldest actress nab an Oscar. But J.Law's win was worth the trip 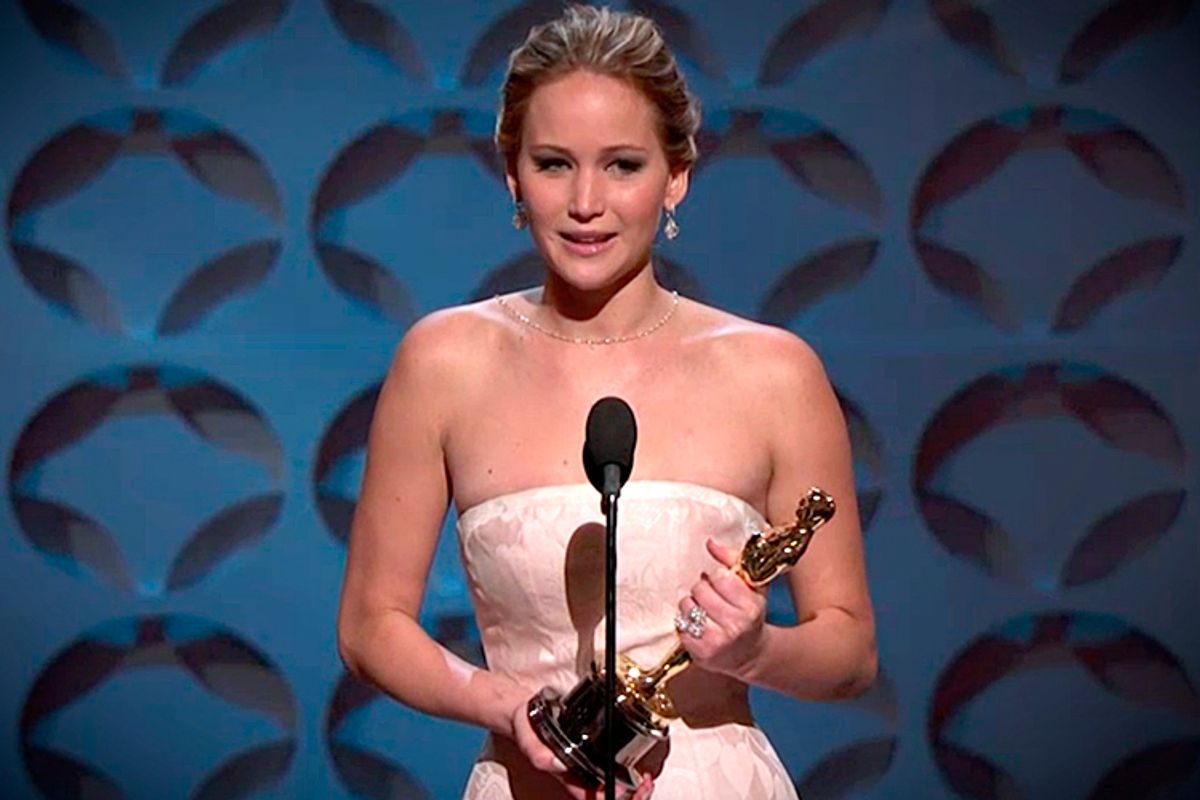 Last night, a debate broke out among our friends on whether the 22-year-old Jennifer Lawrence, now crowned by the academy as the best actress for her terrific performance in "Silver Linings Playbook," will have staying power. One insisted she was a flash in the pan. The rest of us, who first fell hard for her in "Winter's Bone," argued that she really does have the chops. Who can say, really. Remember, Dr. Haing S. Ngor won an Oscar for his brilliant performance in "The Killing Fields," and that was pretty much the last we saw of him. So, only time will tell how her career pans out, though she's poised — with the Hunger Games franchise, and a new deal to reteam with David O. Russell — to stick around for a while. Really, the question that lingers is: Why are young women held to such scrutiny?

J.Law doesn't invite the animus that someone like, say, Anne Hathaway does, not by a long shot. But she did earn a bit of scorn — perhaps fleetingly — when she joked rather awkwardly during her acceptance speech for her best actress Golden Globe, that she "beat Meryl" (who, it was said, wasn't even campaigning for her nomination in "Hope Springs" ) — explaining later that she was referencing a line from "First Wives Club." I admit, I was rooting for Emmanuelle Riva for her brilliant performance in "Amour" — that was the Oscar narrative I was most excited about — but when Lawrence tripped over her dress on her way up the stage, à la Helen Mirren at the Emmys in 2006 ("My great triumph is not falling ass over tit as I came up those stairs," said Mirren when she collected her award), I was laughing along with her, and cheering her on.

No matter. As you can see from this clip from her post-Oscars press conference, Lawrence reminds us how young is 22: She's goofy, gawky, maybe a little filterless, and naive about the way the media parses the crap out of everything that spills out of a celeb's mouth. And how can you not love her retorts to so many of these asinine questions from the press corps? I, for one, am looking forward to watching her evolve as an actress and as a person, but in the meantime, I'm enjoying her present sassy, courageous, easy-laughing self. Watch as she addresses inane questions about the fall, and whether she thinks she's peaking too early. (She admits she downed a shot before meeting with them — a little cup of courage):