Oscars: They were dreary, desperate and insincere. But it had its moments! 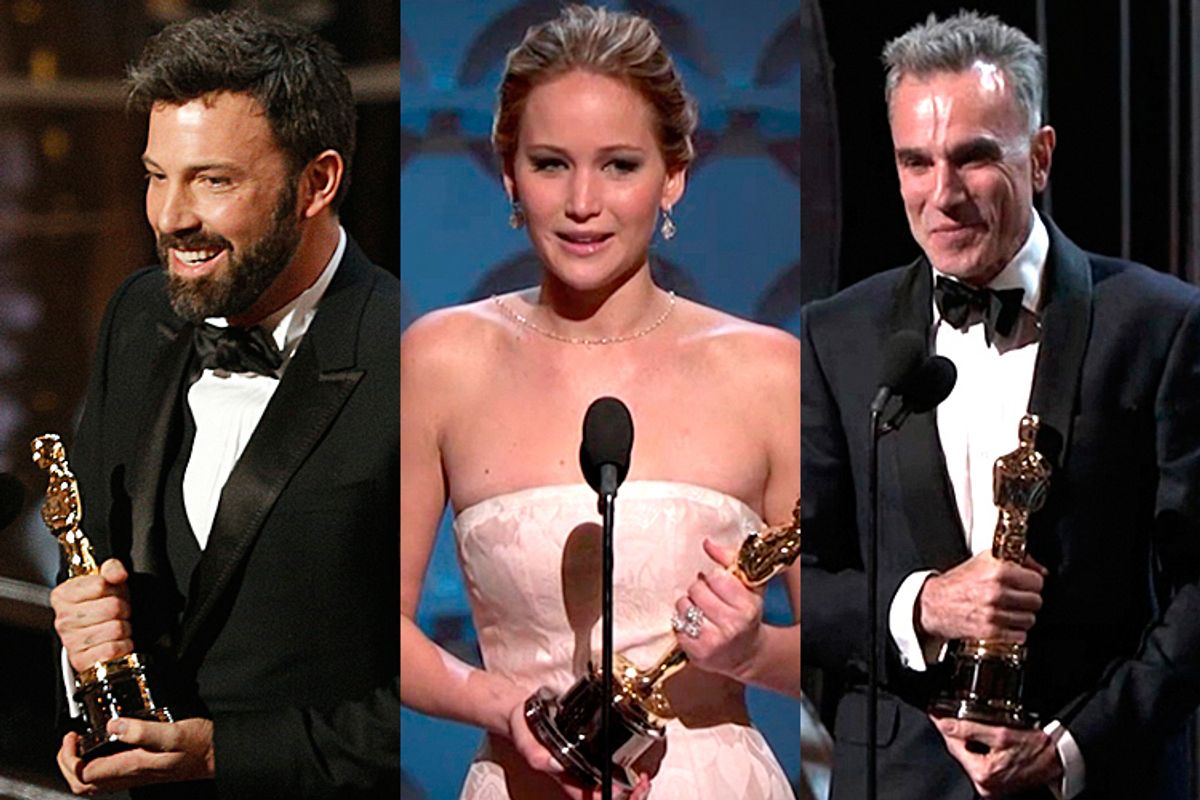 I don’t know that Daniel Day-Lewis’ deadpan gag about switching roles with Meryl Streep – “I was all set to play Maggie Thatcher, and she was Steven’s first choice for ‘Lincoln’” – was actually the funniest joke in the world, but it pretty much brought down the house just before midnight on Sunday. It was one of the few occasions during the Oscars when someone who seemed to have an adult sensibility and an education was speaking on that stage, and I for one felt almost pathetically grateful. Most of the rest of the overextended, hit-and-miss spectacle formerly known as the Academy Awards went back and forth between dreary and desperate to please, which is a pretty good description of host Seth MacFarlane as well.

Of course it’s standard operating procedure for someone in my position (or yours, for that matter!) to mock the Oscars for all kinds of reasons: The terrible musical numbers, the doomed attempts to seem hip and relevant, the amazing empty stretches in the middle of the evening occupied only by technical awards no one outside the film industry understands and commercials for “financial products.” In a year when the most famous awards ceremony in the history of show business changes its name in a last-minute branding panic, that’s all way too easy. It wasn't clear that the Oscars had any further to fall after the legendary James Franco-Anne Hathaway debacle of two years ago and the emergency Billy Crystal early-'90s flashback of last year -- and indeed I suspect this year wasn't worse -- just cruder, stranger and more detached from the Oscars' alleged and theoretical purpose.

I hadn’t grasped quite how odd the choice of MacFarlane was until the show started and I realized that not only is he not a celebrity, but that “Family Guy” fans and people who watch too many talk shows would be the only viewers able to pick him out of a police lineup. My wife came in the room and asked me who the hell that guy was and why they’d picked him, and two friends on Twitter (both journalists, but not movie people) expressed similar bafflement. As for his performance, I will come right out and own my shame: I thought the “We Saw Your Boobs” number was funny. Juvenile and sexist, yes, but kind of funny. For a while, in fact, I was charmed by the whole meta-retro, 1967-Broadway-musical-inside-my-mind premise of the thing, starring MacFarlane as Matthew Broderick as Don Draper or something like that.

But I don’t watch TV that much and can be slow on the uptake. Eventually it dawned on me that all this warmed-over and self-indulgent postmodernism didn’t have anything to do with giving awards to people who make movies, and that MacFarlane was just going to keep telling increasingly distasteful fat-chick jokes and domestic-violence jokes and John Wilkes Booth jokes until it was time to segue into “Why is this show so long?” jokes. Because the show has to be unbearably long – like “Ring of the Nibelung” on OxyContin long -- to get in all the commercials, and because even though this was a really good year for movies there was, as usual, no actual drama left in the Oscar race. And because Hollywood is consumed by fear and panic about its future and basically hates all of us, although not for the reasons the right-wingers think.

There were some obvious high points: Shirley Bassey singing “Goldfinger” (even if she was flat on the high notes), Adele working out her neo-Shirley Bassey pipes over the too-loud orchestra on “Skyfall,” Barbra Streisand looking rather too much like the ghost of Hamlet's father but gracefully keening “The Way We Were” in a too-brief tribute to late, great songwriter Marvin Hamlisch. But let’s get back to Daniel Day-Lewis, who made us feel better, at least momentarily, about expending three and a half hours of our mortal lives on some bizarre variety show, hosted by a guy most of the audience probably didn’t recognize, that ended with five minutes of movie awards. He was gracious and funny and generous, especially considering the scale and difficulty level of his achievement. Amazingly enough, no actor has ever before won three Oscars in leading roles, and Day-Lewis got the third one for playing Abraham Lincoln, for the love of God, and making us all think: Oh, of course that’s how Lincoln walked and talked! I knew that already! Unfortunately, the academy has now made sure that future generations will assume “Lincoln” to be a great big pile of boringness packed around a great performance – as, say, “The Iron Lady” is to Streep – which is totally unfair.

Before the good vibes fade, let me hasten to add that Ben Affleck climbed up on that stage a couple of minutes after Day-Lewis and was a class act in his own way. I’m on record as saying that “Argo” didn’t deserve to win best picture and I’m not backing away from that, but let’s get real. No high crimes and misdemeanors have been committed here; it’s a crafty and competent Hollywood thriller with conventional entertainment values and a vague wash of political-historical meaning painted on top. It shouldn’t surprise anybody to see the film industry prefer something like “Argo” to superior films that are more challenging or troubling in various ways.

If it’s tough to imagine Affleck ever making something on the level of “Lincoln” or “Zero Dark Thirty” – and impossible to imagine him making anything like “Amour” – that’s partly why people in the business like him. He’s growing into a career as a crafter of clean American genre movies, after the fashion of other actor-directors like Clint Eastwood and his pal and co-producer George Clooney. I still think Affleck the director is way too much in love with Affleck the actor, but in a situation on Sunday night when it would have been really easy to come off like a vainglorious jerk, he didn’t at all. Indeed, he hit all his marks in that speech: Say nice things about other filmmakers and other movies, thank his collaborators and family members, try to cheer up the disgruntled Canadians, throw a little love at the contemporary situation in Iran (where “Argo” is reportedly a big samizdat hit).

As almost everyone expected, Jennifer Lawrence was crowned as Hollywood’s hottest female star, and if her nomination was officially for the way she breathed fire into a conventional crazy-sexy-girl part in “Silver Linings Playbook,” all the dollars she’ll bring in through the “Hunger Games” franchise over the next few years had something to do with it too. This was inevitable, people. That whole Emmanuelle Riva/Quvenzhané Wallis thing we had going was nice while it lasted, but there was only one likely outcome to this race from the beginning. It doesn't hurt that she's ferociously talented and beautiful. On the other hand, Lawrence fell down on her way to the stage, so neither you nor I nor anyone else heard a single word she said up there. I won’t indulge in any speculation about whether the mishap might damage her career or whatever, because that’s dumb and it won’t. She will, however, always be the answer to a trivia question, and someday that may be her enduring claim to fame. The best-laid plans, sic transit gloria mundi, etc.

Anne Hathaway was an unstoppable blur of shoulders, collarbones and a million teen-girl crushes, as expected. I can't even begin to imagine what was going through the head of Austrian director Michael Haneke, who was polite enough about winning an award from an industry whose value system he despises and whose motion pictures he doesn't watch. (It was probably something between "May you all suffer the eternal torments of the damned!" and "When can I have some more of those delicious little seafood tarts?") And what are the odds that two different Oscars would go to cultured Austrian gentlemen who seem to represent, fairly or not, completely different cinematic traditions. I'm not aware of any specific connection between Haneke and Tarantino BFF Christoph Waltz, who won best supporting actor for his role as a wisecracking Teutonic bounty hunter in "Django Unchained," but it's impossible that they don't know each other.

I can get my head around the reasons why Ang Lee was named best director for “Life of Pi,” which doesn’t mean I agree. (OK, one reason is that academy members couldn’t vote for Affleck, Tarantino or Kathryn Bigelow.) Not a single person who’s ever worked with Lee has a bad word to say about him, his technical command of the medium is second to none and he has an old-fashioned storyteller’s passion. He won the same award a few years back for “Brokeback Mountain,” which is similar only in that each frame of each shot has been carefully considered. To my taste, the CGI tiger ate the story in “Life of Pi,” leaving us with the most gorgeous and most expensive screen saver ever. When we get to Tarantino winning original screenplay for “Django Unchained,” I have to go into deep parapsychology mode: There’s definitely a whole lot of writing in that movie, and if I’m mind-reading someone who really loves it, then that person must have concluded that it’s good writing. (Probably less than 20 percent of it is gratuitously offensive racial epithets!)

Whatever about the merits of their movies, Lee and Tarantino were both charming – in entirely different directions – in their brief appearances on that stage. Lee told his wife, his crew members and his homeland that he loved them. Tarantino made the gallant if ridiculous prediction that people will be watching his movies in 50 years. (Yeah, he hedged it, but still.) They came off as real middle-aged artists, more than a little eccentric and heavily creased by life – crammed into the margins of a cheerfully bogus pseudo-event that barely had time for them. Yes, this was a special accomplishment of the 2013 Oscars: They made Quentin Tarantino seem painfully sincere.