But strange hatred was everywhere. From the boob song to Twitter-bashing, the Oscars' gender politics were a mess 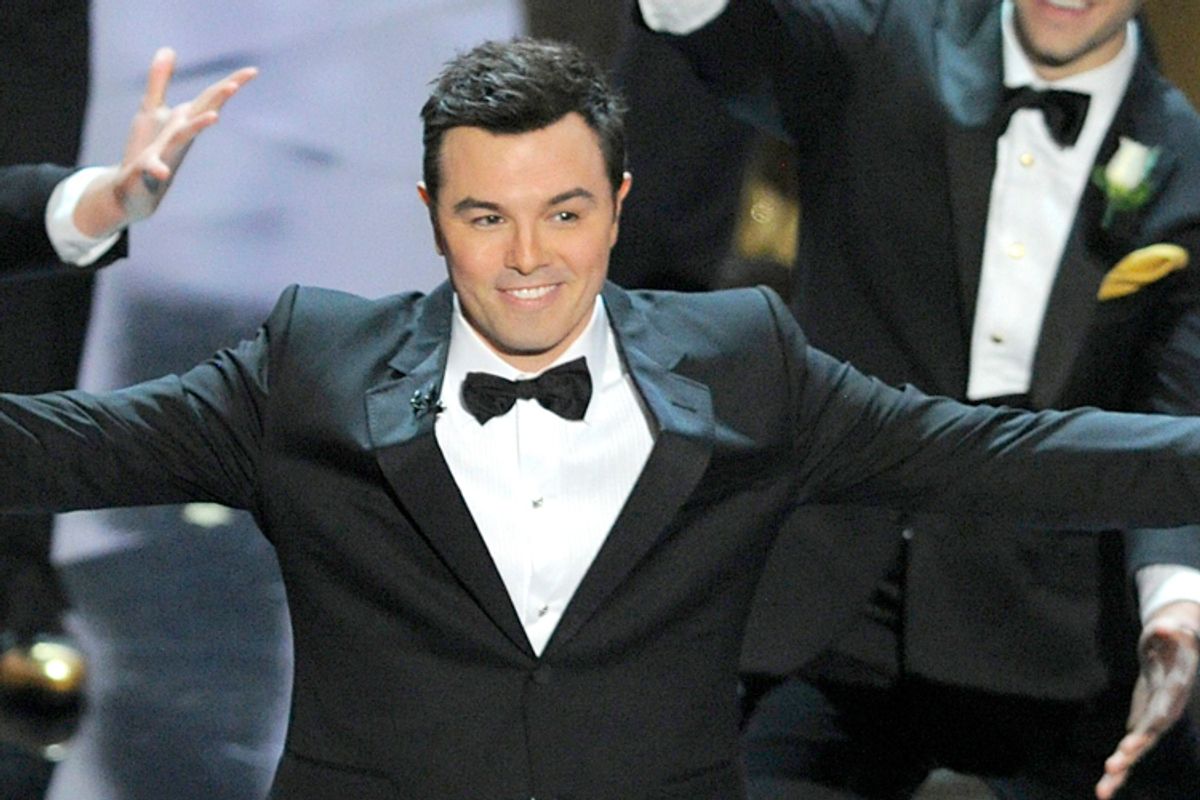 It is the nature of the world we live in that less than 12 hours after the Academy Awards finished, it has been widely noted that Seth MacFarlane made a whole lot of misogynistic jokes at this year’s Oscars. (In the long opening number, in which William Shatner was sent from the future to help MacFarlane avoid being called the worst Oscar host ever, a number of headlines were flashed on-screen: with just a smidge more foresight, they probably could have predicted the one on this story too.)

The show began with a song called “We Saw Your Boobs,”about all the actresses who have shown audiences their tops at one time or another. The women name-checked in the audience didn’t seem pleased (though that was agreed upon in advance). And when Channing Tatum came out a few minutes later to dance with Charlize Theron, he didn’t even strip away his pants at the end of the number. There was no reciprocity last night.

The lady-dissing jokes didn’t stop with the ode to breasts: MacFarlane cracked that Jennifer Aniston was a stripper. He sexualized the young Quvenzhané Wallis: “It'll be 16 years before she's too old for Clooney,” which is, somehow, only the second most offensive thing someone said about the adorable 9-year-old last night. He also described Jessica Chastain’s character in “Zero Dark Thirty,” the ultra-driven women who through sheer force of will made the raid on Osama bin Laden possible, as “a celebration of every woman's innate ability to never ever let anything go.”

In this context, the more standard, easy-target knocks— the kind of joke almost any host would make in our tabloid era — about Rihanna and Chris Brown’s ongoing train-wreck relationship and the hairiness of the Kardashians seemed even more mean-spirited. More remarkable than all undercutting remarks, is that without them, MacFarlane had barely anything to say about women at all: they were either boff-toys or nothing. He introduced Sandra Bullock by her random credit in the movie “28 Days,” just so he could make a joke about getting drunk himself.

MacFarlane’s stock and trade is inappropriate humor — inappropriate humor that can appear on network TV and in major motion pictures, so not that inappropriate. (Think of a stuffed bear making the laziest joke in the world about how Jews run Hollywood.) As a persona, however, he looks picture-perfect appropriate: tall, dark and not off-puttingly handsome. Most of his patter and topical jokes had the rhythm of late-night, where he would fit right in. This is probably why the academy thought he would be a good choice as a host. He can do “young” and “edgy” while sounding like part of the polished establishment. Which is what was so off-putting about the show: the academy, an institution allegedly full of women, homosexuals and bleeding heart liberals, elected a brotastic, tux-wearing dude who probably believes ogling women is the highest form of flattery to be its emissary for the night.

But even while Adele and Michelle Obama and Jennifer “Cinderella” Lawrence were creating the show’s highlights, Twitter was doing something even more unsettling than MacFarlane — it was going absolutely HAM on Anne Hathaway and Kristen Stewart, the one for appearing to care what we think too much, the other for caring way too little. Even people who hated MacFarlane’s performance could find fault with Hathaway and her trembling theater girl thing or with KStew and her refusal to find a comb or look like she gives a shit. (People even made fun of her for walking funny, until they realized she’s been using crutches after seriously slicing her foot. A perfect little encapsulation of what drives folks so wild about Hathaway: Last night she told Stewart to "break a leg ... oops.")

I understand what people find annoying abut these women — Don't do the Oscar show if you don't want to do the Oscar show! Check your needy inner-theater chick, please — but the level of dislike is jarring. Both of these women are, after all, very good at their jobs — the job of, you know, acting — and very good at making dull awards shows a lot more interesting. But both of them came in for it: there was name calling, concern trolling (“Use a comb girl” etc.), and a passionate, irrationally high level of irritation. “It's almost like we were culturally conditioned to aggressively police women who fail to satisfy a very narrow concept of likeability,” the culture critic Lili Loofbourow tweeted — which is exactly right. And jerky as he was, we can't lay that all on Seth MacFarlane.