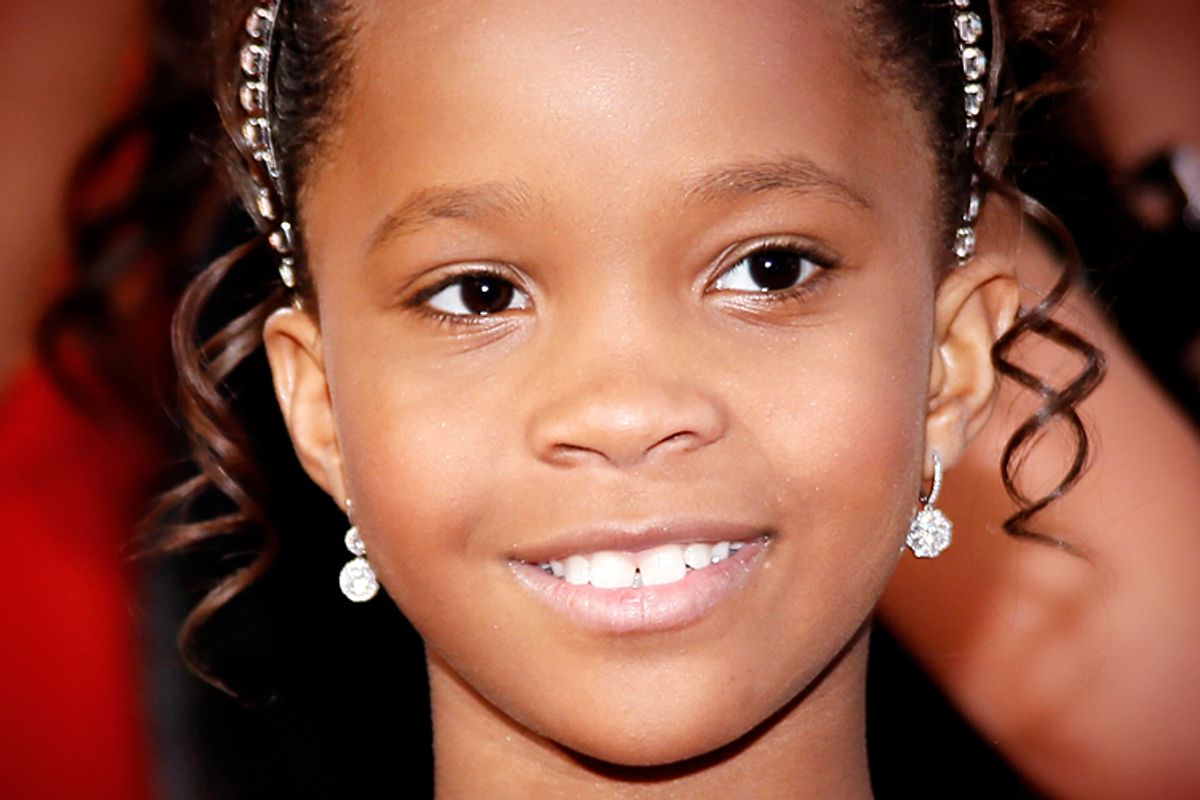 I turned off the Oscars a short while after M.C. Seth MacFarlane’s “We Saw Your Boobs” routine. The skit was framed by a stern-looking William Shatner playing "Star Trek’s" Captain Kirk, returned from the future. He was chastising MacFarlane for the trashy routine that Kirk predicted he would soon be doing. There was very little funny about it, and a quick pan of the audience revealed a bunch of famous women not laughing — including Charlize Theron — who nevertheless “classed up” the trashy routine by following up with a ballroom-style dance with Channing Tatum.  I’m not sure how Theron felt about it, given her subsequent participation, but I’m assuming my response was somewhat shared by many of the straight-faced actors in the audience.

That was bad enough. This morning, I woke up to the news that the Onion decided to take up MacFarlane’s “humorous sexism” prompt and notch it up to ironic racist misogyny with a tweet on its official account about 9-year-old Quvenzhané Wallis, the heart of the film "Beasts of the Southern Wild." Notice that at least 515 people found this tweet “funny” enough to retweet before the Onion deleted it sometime later. Who gets a tweet retweeted over 500 times unless it seems so overwhelmingly insightful — or so overwhelmingly funny and untroubling?  Add to that casual acceptance some part of the 413 who favorite — favorited? — a racist and misogynist tweet about a 9-year-old African-American girl.

It’s a blaring example of how casually racism and misogyny, even about young children, can be accepted and even celebrated by some percentage of the public -- especially when it is couched in the form of humor. So many kinds of hostility — racial, sexual, homo- and trans-phobic humor -- gain an easy acceptability, precisely because it plays into the ironic hipster self-aware racism of “being so cool that we know it’s racist that it’s ok to participate in it. We’re above it.”

Someone on Twitter suggested that “no one believes that Quvenzhané is a c---.” What does it even mean to say that someone “believes” or “doesn’t believe” this? Others will respond that it’s just an offhand comment. Nope. It’s a sexual and racial epithet.

As law professor Richard Delgado wrote some two decades ago, we can make distinctions between speech, and insults and epithets. It is misogynist to refer to anyone with a term like that. It is hard to imagine any context in which that term is merely “descriptive,” which would be the minimum condition to accept it as speech. Is it racist, too? Yes. Why? Because this child is African-American? Yes. As law professor Kimberlé Crenshaw has discussed frequently, using an intersectional framework -- that is, seeing this comment through the intersecting lenses of race and gender (among other axes) -- allows us to understand how in this very un-colorblind world such a term, when directed toward someone who is black and female, has significant sexual and racial implications.

For a girl-child to be referred to in such a way, and to have the remark be repeated in such a widespread fashion, shows the casualness with which the decency and dignity of young people of color can be violated without a second thought. It is a message that will be picked up, spread and reinforced in other venues, much like a wildfire in a dry forest.

Twitter may be prone to this, especially in the urgency of the moment of “live-tweeting” -- the urge to be faster, smarter, quicker, sharper, more acidic, in order to have one’s “thoughts” (if we can call it that) shared quickly and widely. But it also has the unwitting implication of removing most filters to thought. It has a limited use, as in this case, in that it reveals the unacceptable thoughts that many would think quietly. Hiding those thoughts don’t make them go away; at least we get to know and have proof of the easy vileness that those in public “spaces” can promulgate concerning young vulnerable targets. It’s also evidence of the casual verbal hostility that is acceptable to direct toward women -- and women of color -- and young black girls on a daily basis.

It has been less than 11 days since the 1 Billion Rocking Event, led by playwright and feminist Eve Ensler on Valentine’s Day. Either the Onion has already forgotten about, or never got the message that was to be publicized, which was to challenge and resist sexual violence to women. As Anoushka Shankar said poignantly that day, the sexual violence faced by many women like her began when she was a child. As important, adults (especially those who can seek refuge behind the anonymous walls like those of the Onion) need to refrain from leveling such casual spite at children.

Chances are that no one, including the Onion tweeter, who really needed to hear the message from that event was at that event, which raises other questions. But we need other ways to communicate the message that leveling such misogynistic language at anyone -- but especially young girls who will grow up to face plenty of misogynist treatment like that leveled by MacFarlane and his ilk -- is tantamount to serious psychic harm. At 9 years old, Quvenzhané Wallis is already in the spotlight, and faces plenty of hostile attention. She and countless girls are already psychically vulnerable to internalizing the messages directed at them. Even after the obligatory apology that was issued from the Onion offices, we need to do much more to counter such racism and misogyny, and to prevent it from affecting young girls of color from such an early age.