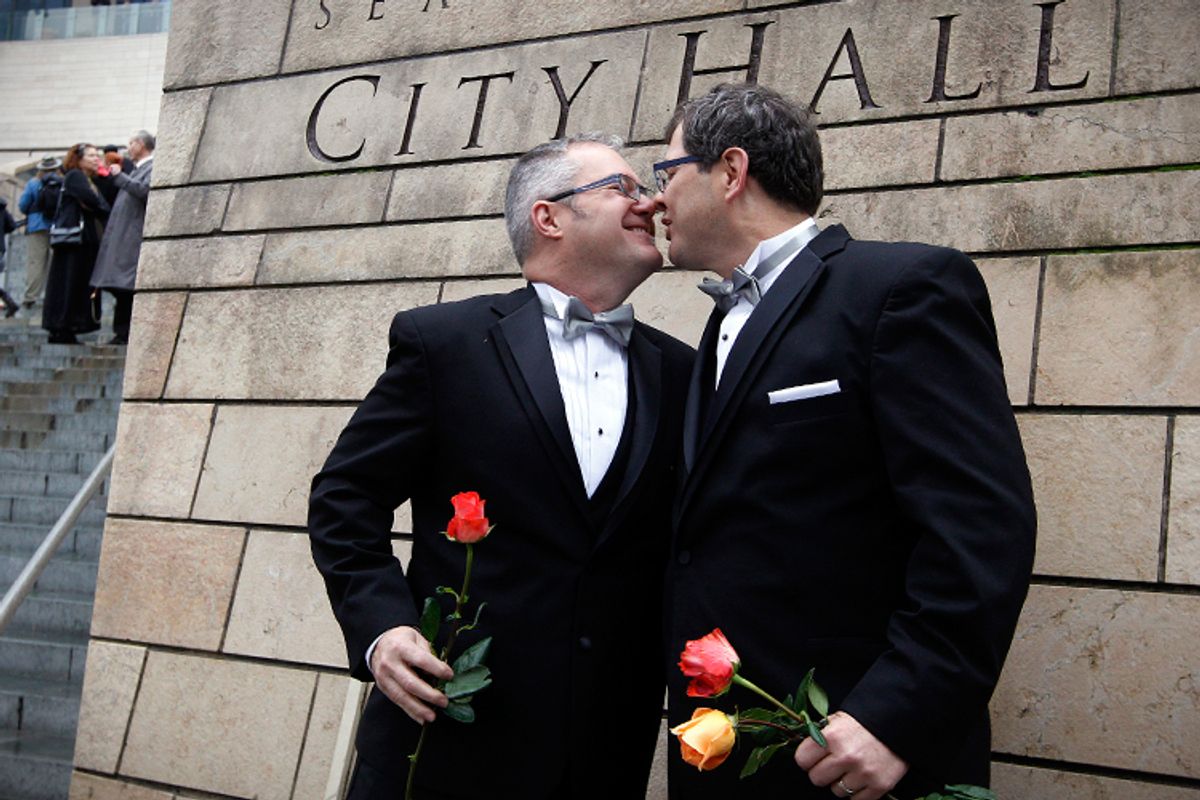 OK, it's a bit more complicated than that. The Post's ombudsman, Patrick Pexton, ran a column with a classic ombud headline, "Is the Post 'pro-gay'?" A reader got into a "vigorous three-way e-mail dialogue" with Pexton and a Post reporter, with the reader claiming the Post "caters slavishly to Dupont Circle," a reference to a wealthy Washington, D.C., neighborhood known for its many LGBT residents and also a claim that I bet the Post's advertising team would be happy to add to its pitches.

The reporter and the reader had an argument about the purpose of journalism:

Replied the reporter: “The reason that legitimate media outlets routinely cover gays is because it is the civil rights issue of our time. Journalism, at its core, is about justice and fairness, and that’s the ‘view of the world’ that we espouse; therefore, journalists are going to cover the segment of society that is still not treated equally under the law.”

The reader: “Contrary to what you say, the mission of journalism is not justice. Defining justice is a political matter, not journalistic. Journalism should be about accuracy and fairness.

(Both of these people are wrong. The mission of journalism is delivering eyeballs to advertisers.)

The reporter asked to go unnamed, likely because the rules of "objective" mass media journalism forbid him from admitting that he even possesses personal beliefs about the major issues of the day. (Except for when it comes to deficit reduction.) That's sort of a shame, because we're really better off if everyone is just totally upfront and transparent about where they are coming from. In this case, the reader is attempting to use those objectivity rules to force the newspaper to print political arguments he agrees with alongside, I guess, any random article featuring gay people. This is an unreasonable request, though I guess kudos for trying.

But the Washington Post is a mass audience newspaper intended for a large coastal liberal readership. It represents the interests and ideology of its audience. So, yes, it's going to have gay people in the "dating" feature in the lifestyle section of the newspaper, because it would be insane if it didn't. (The D.C. area has a few separate newspapers for the region's conservatives, and they are basically angry opinion sections attached to cheaply produced "news" product.) This is also why the New York Times has so many articles about stuff rich people like to do.

James Taranto, an opinion writer for the Wall Street Journal, is outraged at the reporter for having and expressing the opinion. Taranto is primarily upset that this liberal journalist said people who believe, as Taranto believes, that gay people should not have the right to marry are bigots and homophobes, but Taranto devotes much of his column (which is called "Best of the Web Today" for some reason?) to idiotic complaints about the reporter's lack of "objectivity." "If you're a reporter at the Washington Post and you aspire to write unsigned editorials," be begins, "just send an email to the ombudsman." Oh no, a reporter's opinion was expressed, says the professional opinion writer.

The anonymous reporter, however, goes far beyond bias, and even beyond bad faith--that is, beyond abusing his credibility as an "objective" reporter to further his cause. To judge by his emails to the reader, he has achieved a perfect Orwellian inversion. He has convinced himself that objectivity and bias (or at least his bias) are one and the same thing.

It is funny (or maybe it is ORWELLIAN) how "objectivity" basically always means "excessively charitable to conservative political arguments," when conservative media people bring it up.

This Post reporter sounds epically full of himself and he believes a lot of dumb self-serving lies about the nobility of the sorry business of newsgathering, but he at least doesn't believe in the ancient canard of "straight-down-the-middle" objectivity as a self-evident virtue. Pure unbiased objectivity is not merely impossible it is not worth attempting. Most American mainstream media is informed by a bias for representative democracy, as opposed to dictatorship. Most stories in the "objective" news section of James Taranto's Wall Street Journal are very biased in favor of capitalism, and quite unfair to Communism. I doubt Taranto objects to the fact that Post reporters rarely "make an honest effort to play it straight and be fair to both sides," to use his phrase, when writing about anti-Western Islamic terrorism. In general, Americans are pro-capitalism and democracy, so its media are, too. In general, Washington is pro-gay, so why oughtn't its press be pro-gay as well? The Post is not a newspaper for this particular reader. There are plenty of media sources that are intended for him (or her) (probably him).

The National Review gets into it as well, with David French complaining that "it's astounding how many times liberals say 'libertarian' when they really mean 'libertine.'" Indeed, I am astounded every time I see that. Haha, also: "The sexually libertine leftist lays the groundwork for cultural and fiscal ruin."

Taranto's irrelevant moaning about impossible standards of "objectivity" and French's "oh no the left will bankrupt America with hedonism" both very successfully obscure the actual decent question raised by the original column, which is whether or not the Post has a responsibility not just to "fairly" portray the arguments of people opposed to gay marriage, but whether the Post must portray those arguments in the best possible light. Conor Friedersdorf is conflicted!

I think a true commitment to accuracy doesn't require presenting the "best" arguments against it. The fact that a few supposed non-bigots have composed "thoughtful" arguments against same-sex marriage doesn't change the fact that opposition to gay marriage is still mainly based on revulsion and homophobia. In debates and punditry it's always best to present the best possible form of your opponent's argument, but if the point of journalism is to describe the world accurately, it's truer to say that most people oppose gay marriage because they vaguely think it's gross and wrong than to say that millions of people vote for gay marriage bans because they believe in "a particular sexual ideal" "derived from Jewish and Christian beliefs about the order of creation, and supplemented by later ideas about romantic love, the rights of children, and the equality of the sexes," to quote a Ross Douthat column Friedersdorf links to as an example of thoughtfulness.

That Douthat column is honest in ways few gay marriage opponents are about a number of facts that are central to the debate: first, that "traditional marriage" is a modern invention without "natural" or even much historical precedent, and second, that once the tie between marriage and procreation has been severed, there aren't many compelling arguments for restricting marriage to heterosexual couples. If this is the best argument against gay marriage, readers who are presented with it ought to also know that it's also an argument against allowing divorce, except in extreme cases.

I'm entirely in favor of journalists reading and understanding the best arguments against civil marriage for same-sex couples, just as I'm totally in favor of Wall Street Journal writers reading a bunch of Marxist economics, but to pretend that these thoughtful critiques are the driving force behind the anti-gay marriage movement is dishonest.

The real problem for the Post -- and it's also a problem for CNN and the New York Times -- is that as long as they maintain a rhetorical commitment to an impossible standard of "objectivity," they leave themselves open to attacks from a conservative movement that wants its talking points repeated uncritically. The Post can (and should) promise to be fair when it writes about gay marriage opponents, but it shouldn't pretend to find all arguments on gay rights to be equally valid.