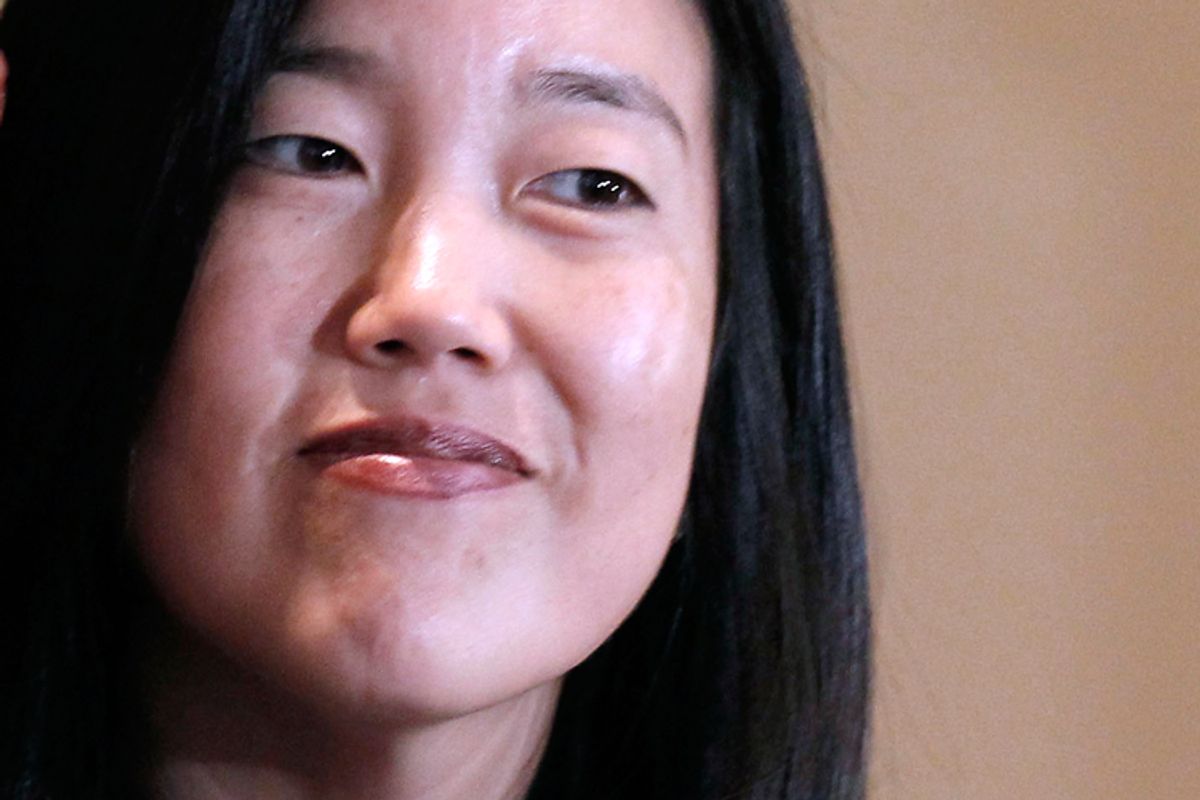 Getting past the denial stage and acknowledging both of these problems is certainly a step toward one day fixing them. However, there's another more subtle and self-reinforcing form of denial that makes getting to those solutions more difficult. That denial -- or perhaps cognitive dissonance -- evinces itself in an American psyche that tends to perceive the democracy and education emergencies as separate and distinct.

Essentially, we see the cause of voting-rights activists, get-out-the-vote pushes and same-day registration crusades (among others) as divorced from the concurrent education policy fight between public school advocates, teachers' unions and corporate education "reformers." We see them as disconnected from one another even though the two battles are fundamentally fused by a simple truism: Basically, you can never hope to have a functioning democracy over the long haul if your education system is trying to convince students and parents to abhor democracy.

That, of course, is exactly what is happening right now thanks to a scorched-earth campaign by the corporate interests that see big potential profits in privatizing public schools.

Like so many other industries currently waging a war on democratic institutions that get in the way of bottom-line concerns, this Wall Street-backed education industry sees democratic forces -- elections, collective bargaining, local control, etc.--- as obstacles to private profit. Thus, the industry, through financing the crusades of education "reform" advocates, is trying to maximize its bottom line by reducing democratic control of the most local of local institutions: the schoolhouse. In the process, the "reform" movement is forwarding an extremist message to kids and parents that runs counter to the most foundational ideals of American democracy and self-governance.

You can see that message in myriad actions over the last few years.

For instance, at the behest of corporate education "reformers," more and more cities are moving to eliminate the democratic process of electing school boards, effectively telling students, parents and the larger community that republican democracy cannot be trusted to manage fundamentally public institutions. Similarly, corporate "reformers" are constantly demonizing teachers' unions, effectively telling students and parents that the major vestige of workplace democracy in schools must be crushed.

Then there is corporate "reformers'" push to replace publicly run schools with privately run charter schools, even though the charter schools typically perform worse than the public ones. That tells students that a public institution with some modicum of democratic control is inherently less ideal than a private, undemocratic tyranny.

Likewise, as shown most recently in this recent Reuters investigation, those charter schools often "screen student applicants, assessing their academic records, parental support, disciplinary history, motivation, special needs and even their citizenship" -- and then hand-pick only the students the school administrators want. That tells students and the community at large that the core democratic notion of equal opportunity for all shouldn't be honored even in public education. Just as problematic, as Andrew Hartman noted in his incisive Jacobin magazine report on Teach for America, many of the most hyped charter schools force families to "sign contracts committing (their children) to a rigorous program of surveillance," thus sending the additional message to low-income kids that to succeed in America, they must be willing to submit to "institutionalization" and give up their most personal democratic freedoms.

Taken together, the education "reform" movement is waging a comprehensive war on the most basic notions of democracy -- and not a secret war, either. It is quite explicit, as evidenced by the comments of the most famous and politically renowned leader of that movement, Michelle Rhee.

During her tenure as the head of the Washington, D.C., public schools, Rhee engaged in mass firings and school closings; helped private testing companies impose a strict standardized testing regime on students; did nothing about a massive cheating scandal in her midst; and, as PBS Frontline notes, produced an academic achievement record that leaves "Washington still among the worst in the nation and D.C.’s high school graduation rate dead last."

That's where Rhee's little-noticed but incredibly revealing comments come in. As grass-roots opposition in the local community understandably rose up to oppose her destructive policies, Rhee made quite clear what she and her movement thinks of the notion of local control of schools and community involvement in education policy:

MICHELLE RHEE: People said, “Well, you didn’t listen to us.” And I said, “No, I listened to you. I’m not running this district by consensus or by committee. We’re not running this school district through the democratic process.”

FRONTLINE: [on camera] It’s not a democracy.

MICHELLE RHEE: No, it’s not a democracy.

If a statement like that about public schools isn't offensive enough unto itself, remember that Rhee made it not as some outside observer. She made it while she was holding public office. Yes, that's right: A person who held a democratically accountable office was making clear that the national "reform" movement she leads believes that schools are no longer and should no longer be controlled by any kind of democracy.

In one sense, Rhee subsequently became an encouraging lesson in the resilience of democracy: In a 2011 election that became a direct referendum on Rhee's policies, D.C. voters took the extraordinary step of tossing her and her boss, Mayor Adrian Fenty, out of office after just one term.

However, in another sense, Rhee has also become a discouraging lesson in the persistence of the corporate crusade against democracy. Rather than being ostracized for her obvious failure she has been rewarded. Indeed, for coupling both education policy failure with such a brazen assault on democratic ideals, Rhee has been employed as an education expert by political leaders of both parties, seen the coffers of her book-hawking political front group expand and been rewarded with fawning coverage from the political and media elite.

That's, in part, because that elite genuflects to the same corporate forces that see profit potential both specifically in education "reform" and generally in the larger effort to curtail democratic power. It is an elite that openly praises the "great advantages" of China's dictatorial government and derides the concept of local control if it gets in the way of profit. In similar fashion, that same elite so loyally supports ever more extreme efforts to corporatize schools that it is willing to try to portray a failed extremist like Rhee as a national hero.

Considering the breadth and scope of this whole education "reform" propaganda campaign, it is a good bet that at both the media and the local schoolhouse level, parents are being stealthily influenced to see democracy as at least unnecessary and more likely altogether negative. Even worse, so are kids.

As anyone with a child well knows, young people -- and especially teenagers -- absorb what's happening around them, and that obviously goes for the schools in which they are spending much of their days. They may not know the granular details of education policy, but they absorb the meta messages in which we are all immersed. And right now, that means that at some level, many are no doubt absorbing the education agitprop's anti-democratic messages. Sure, they may be taught in civics class about the supposed supremacy of democracy in the Greatest Country on Earth, but increasingly, those civics lessons are being contradicted by far more powerful messages they see emanating from the concrete actions of the adults running their schools.

In a perverse way, that means our education system is actually starting to live up to the dream of so many American politicians, business leaders and pundits who want America's schools to emulate China's.

In that Asian nation, a dictatorial government -- motivated by obvious self-interest -- has rigged its education system to downplay the whole concept of democratic control and democratic freedom so as to create a culture that disdains the very notion of self determination. While more subtle in its tactics, America's education system is working to create much the same thing. In doing so, the plutocrats and apparatchiks who run the education "reform" movement understand exactly what the Chinese dictators understand: that school policy and democratic ideals cannot be separated, and that the best way for a cadre of elites to squelch those ideals in the future is to eliminate them from the schoolhouse as quickly as possible.