There will be more Trayvons

On the one year anniversary of his shooting, we're still not doing enough to protect our young people 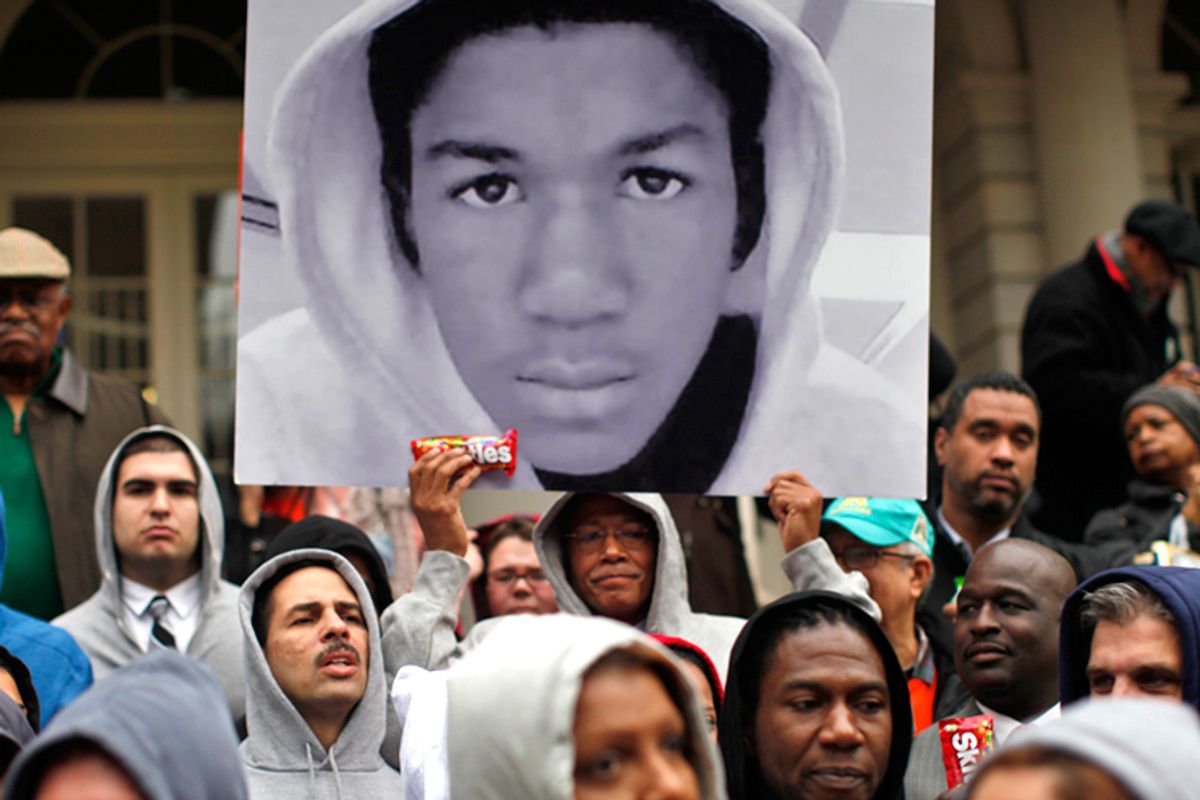 Members of the New York City Council stand together on the steps of City Hall in New York, March 28, 2012 during a news conference to call for justice in the February 26 killing of Trayvon Martin in Sanford, Florida. (Reuters/Mike Segar)
--

Trayvon Martin was shot dead exactly one year ago today. As we acknowledge this dubious anniversary, a question to consider is: Are we doing any better a year later, when it comes to keeping young people safe?

Not long after the shooting, young people, of all races took to the streets, to show their solidarity with Trayvon, in Million Hoodie Marches, saying, “We are all Trayvon.” In the ensuing year, the response to the case often shook out under two camps: those who identify with the young man, versus those who reflexively, insistently, perniciously identify with George Zimmerman. (“We are all George Zimmerman," they inherently believe, the potential victims of a nasty mugging.)

Also not long after the shooting, I appeared on The O’Reilly Factor to insist that Trayvon had been “shot in cold blood.”  The show’s host took great exception to my claim.  Bill O’Reilly vented surprise and outrage that I would be unwilling to shoot an armed assailant attempting to mug me.  “I would shoot a four-year old!” O’Reilly shouted at me.

Sadly enough, the Aurora shooting and the Newtown massacre force us all to confront the illusory and misleading sense of safety in seemingly safe environments. Right-wing conservatives tend immediately to empathize with assailants. I have witnessed first-hand many insist that Zimmerman left his encounter with Trayvon bloodied, and that Zimmerman accosted Trayvon in the necessary and legitimate act of patrolling the Twin Lakes Community armed.  "He stood his ground."

But let’s put ourselves in Trayvon’s shoes: Did he feel safe? What constitutes his safety?  What’s a safe community?

More so than a cautionary tale on racism—and racial profiling—Trayvon Martin’s needless death is a devastating lesson on the paranoid logic of gun capitalism. After all, the youth was shot by a multi-racial vigilante assailant – with a troubling history with law enforcement -- in a multiracial gated community. When will we learn the unacceptable deaths from explosive gun violence?  What makes a community?  What makes a safe community?

After Trayvon Martin's murder, I revealed gated communities as the perfect microcosm of paranoid American capitalism, in the New York Times.  Imagine an America where your hunting license doubles as a valid form of ID. Of all the harebrained schemes I picture coming from an embattled National Rifle Association, that’s the most likely. The $200-million dollar merchandising, marketing, and gun-lobbying behemoth continues its old tricks.

The NRA cultivates close ties with the American Legislative Exchange Council (ALEC), a backdoor network of conservative state lawmakers and corporations, like ExxonMobil, Pfizer, and RJ Reynolds. ALEC ghostwrites conservative bills nationwide on behalf of its corporate sponsors and its tight network of special-interest funders, like the NRA.

More so than ever, NRA and ALEC demand our public vigilance. They are pushing a hypocritical one-two-punch of harmful legislation: overly prohibitive voter identification laws and overly permissive Kill at Will laws. Even as this NRA ally tosses up legal hurdles to voting, it is smashing down barriers to owning and using guns for so-called self-defense.

In the meantime, ALEC and the NRA help explode the legal loopholes that worsen gun-purchase fraud.

Americans, especially criminals, can buy weapons, including military-style semi-assault rifles and grenade launchers, without meaningful regulation. In most states, there are no background checks or even proper ID required for people who buy firearms outside of gun stores. Almost half the guns bought in America are purchased outside of a licensed gun shop: by mail order, on-line, and at gun shows. There are virtually no restrictions on the type of weapons available for purchase by Americans at these popular outlets. Small wonder that an undercover investigation of illegal online sales revealed more than 6 in 10 private gun sellers agreed to sell a firearm to a person they knew to be prohibited from buying one.

The NRA and ALEC use their deep networks with conservative lawmakers in state legislatures to pass similar Kill at Will laws to Florida’s Stand Your Ground law. Contradicting their supporters’ stated intentions, these Kill at Will laws have neutral to negative ability to curb crime. In states with Kill-At-Will laws, the average number of "justifiable homicide" cases per year increased by more than 50 percent, and tripled in Florida, where the Kill-At-Will law has been invoked as a legal defense in neighborhood disputes and road rage.

And what a loopy, vicious cycle:  Self-serving arms dealers and gun lobbyists effectively weaken our gun laws, flooding the market with illegal firearms, then complain that too many criminals have guns, which thus requires shoot-first laws to justify “self-defense.” Bullet-ridden loopholes that allow criminals to enjoy military-style semi-assault weapons and kill at will perpetuates the gun lobby's self-serving prophecies and burnishes its facade of public service.

Given my honor-roll student nephews who wear hoodies in their suburban communities, the Trayvon Martin case unsettles me with gut-churning disquiet.

Obviously, the circumstances surrounding Trayvon and Newton are dramatically different. But both cases raise devastating questions on protecting the vulnerable. When will this country have sensible gun laws so that inconsolable, baffled parents will not have to bury their gun-riddled kids?