Ghosts of the Tea Party 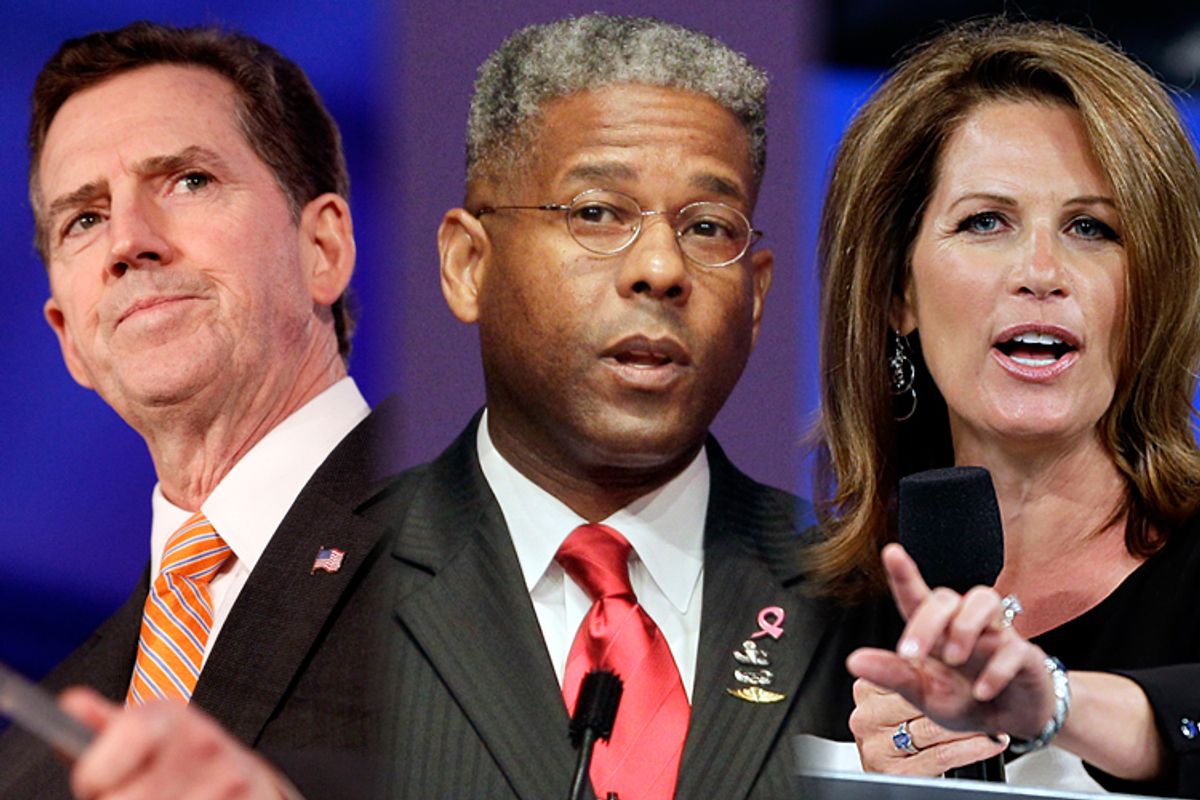 Who are the names that come to mind when you think about leaders of the Tea Party movement? Maybe Sarah Palin, Glenn Beck, Jim DeMint, Ron Paul and Michele Bachmann? Those were the most popular leaders listed by self-identified Tea Party activists in a 2010 Washington Post poll, at the height of the movement. You could add to that list a handful of other congressmen, especially outspoken Reps. Steve King, Allen West and Joe Walsh, among others.

And then you’d realize that every single one of them either lost their job or abandoned being a voice of the movement.

The 2012 election was devastating for the outspoken leaders in Congress. Allen West lost after a protracted battle, Joe Walsh was trounced by rising star Tammy Duckworth, and Ron Paul retired. Other, lesser-known members like Roscoe Barlett also lost. The two House Tea Party Caucus members who ran for the Senate last year both lost -- Reps. Denny Rehberg in Montana and Todd Akin in Missouri.

Meanwhile Jim DeMint, the most prominent Tea Party leader in the Senate, who funded primary challenges against more moderate Republicans, left the Senate a month after the election to head the Heritage Foundation.

As for Bachmann, the founder of the Tea Party Caucus, she's gone almost completely silent, as MinnPost noted last week. Since the November election, she hasn't done any national television, has appeared on the radio only once, and has ducked most interview requests. Instead, those close to her say she’s focusing on the quotidian work of a legislator -- advancing bills and helping constituents -- instead of the more exciting work of being a national movement leader and media star.

The new strategy could be to lay the groundwork for a Senate bid against Al Franken in 2014, or it could just be an attempt to hold on to her seat after a dangerously narrow 1.2 percent margin win in November and an aborted presidential campaign before that. In any case, the most prominent Tea Party leader in Congress seems to have abdicated the role, at least for the moment.

The same is true for Rep. Steve King, who has rarely been heard from since November, when he got a run for his money from Democrat Christie Vilsack. Perhaps a bit chastened, or perhaps in anticipation of a rumored upcoming Senate bid, King has laid low and spoken out mostly to soften his hard-right image.

King has always staked out the far-right flank of the the party on immigration, so it was shocking to hear him say in January that he supports most of the comprehensive immigration reform bill emerging in the Senate. It seems to be indicative of a concerted effort to moderate his image.

Then there’s Sarah Palin, whose long decline into irrelevance got a big kick from behind when Fox News dropped her in January.

It's a similar story for Glenn Beck, who, despite his success on the Dish Network, has nowhere close to the following he had during his Fox News days. And he’s moved away from the partisan red meat that made him famous, rebranding himself as a nonpartisan libertarian with a big emphasis on faith and religion.

So who does that leave?

Slim pickings. The House is almost bereft of young, outspoken Tea Party leaders, with the possible exception of Michigan Republican Justin Amash, but he’s staked out a staunch antiwar position that will make him unpalatable to many more hawkish conservatives. The Senate has more promise, with the two most obvious contenders being Rand Paul and Ted Cruz, who are just now stepping up their profile.