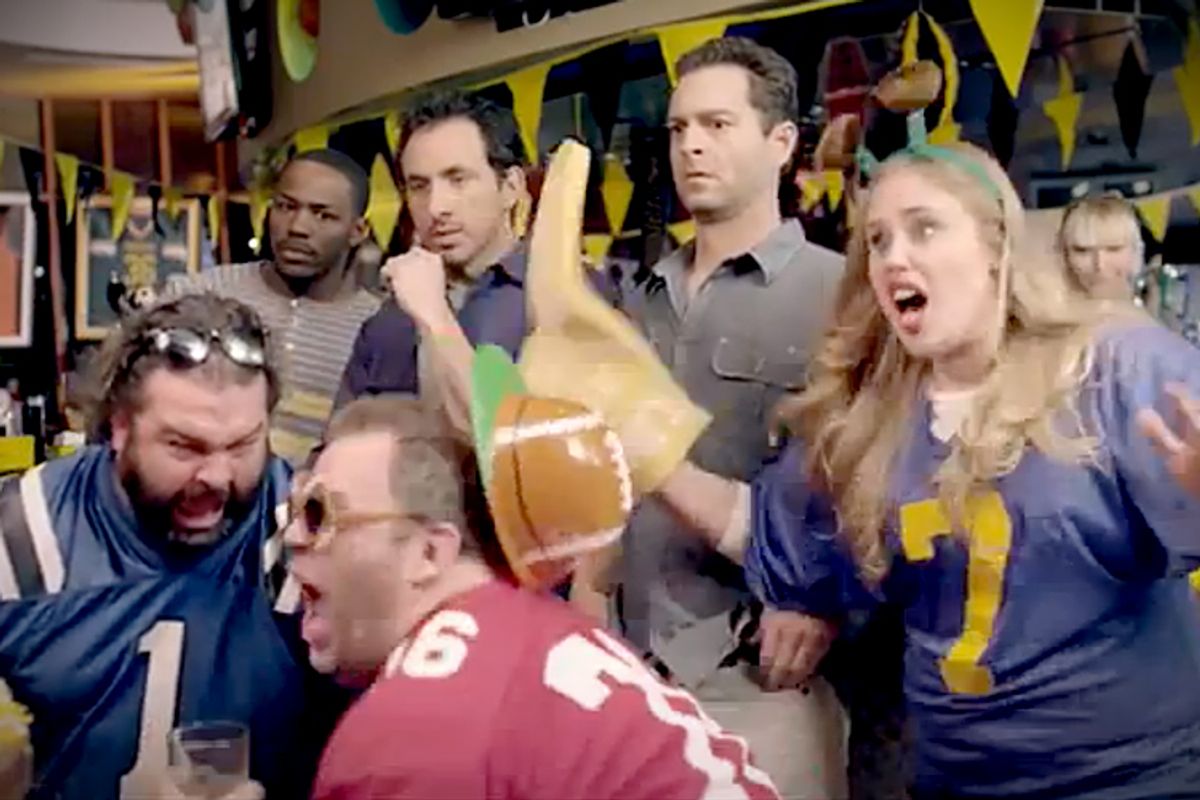 Hooters has decided to get a lot more in your face. And that's not nearly as enjoyable as it sounds.

In its new Guy Fieri-speak "step into awesome" campaign, the mammarily themed chain, not universally prized for its subtlety, takes aim at the competition – the sad, pathetic, probably full of fatties competition – and ushers you into a paradise of boobs, wings and joy.

The campaign, created by Skiver, features three new ads, two of which are already posted on YouTube. Hooters CMO Dave Henninger describes the new theme as showing the world what a "liberating experience" their "restaurants" are. In one, a tragic victim of a Chipotle-like burrito bar contemplates the pale, sad, droopy column of meat in his hand — I couldn't make this up if I tried. But in his mind, he goes to his happy place, flanked by his friends – a lady and a black man! – a land where girls smile at him and give him cardiac-inducing-size plates of onion rings and burgers, and salads that look like they might actually give your grandchildren high cholesterol. And where Wednesday is wings day! Hooters would like you to know that they're "boneless" — well, the chicken wings, anyway. Probably the only boneless offering you'll ever get from Hooters. AM I RIGHT?

In another ad, a trio of frightened-looking males is gathered at a sports bar. One of them gives a snarky elbow to another as a fat chick thunders by in her football jersey, and eyes are rolled. Then, an assembly of other overweight patrons of both sexes jump into the picture, yelling and waving their giant foam fingers all over the place. But in their mind palaces, they are whisked to Hooters, a place of beer where they can watch the game and have big-breasted women laugh at their jokes unencumbered by the horror of regular people.

Skiver's CEO Jeremy Skiver told Forbes this week, "We wanted to show exactly what happens inside the walls of Hooters, and remind people familiar with the brand of how awesome the experience is." And the company says, with an apparent straight face, that the campaign is designed to showcase its "innovations." I did not know that putting a set of jugs in a tank top and aiming a camera at them was innovative, but keep up the good work, guys.

It's one thing to be in the business of selling boobs and wings; I get that that's what Hooters is all about. But it's another to do it while depicting others – women especially – as props to be mocked. I thought boobs and wings pretty much sold themselves. Does Hooters really have to peddle them at the expense of the overweight? Because when I see that, I feel like I stepped in something all right, but I wouldn’t call it awesome.