Upwards of 70,000 lives later, Joaquín "El Chapo" Guzmán's crew remains in tact -- and could be getting stronger 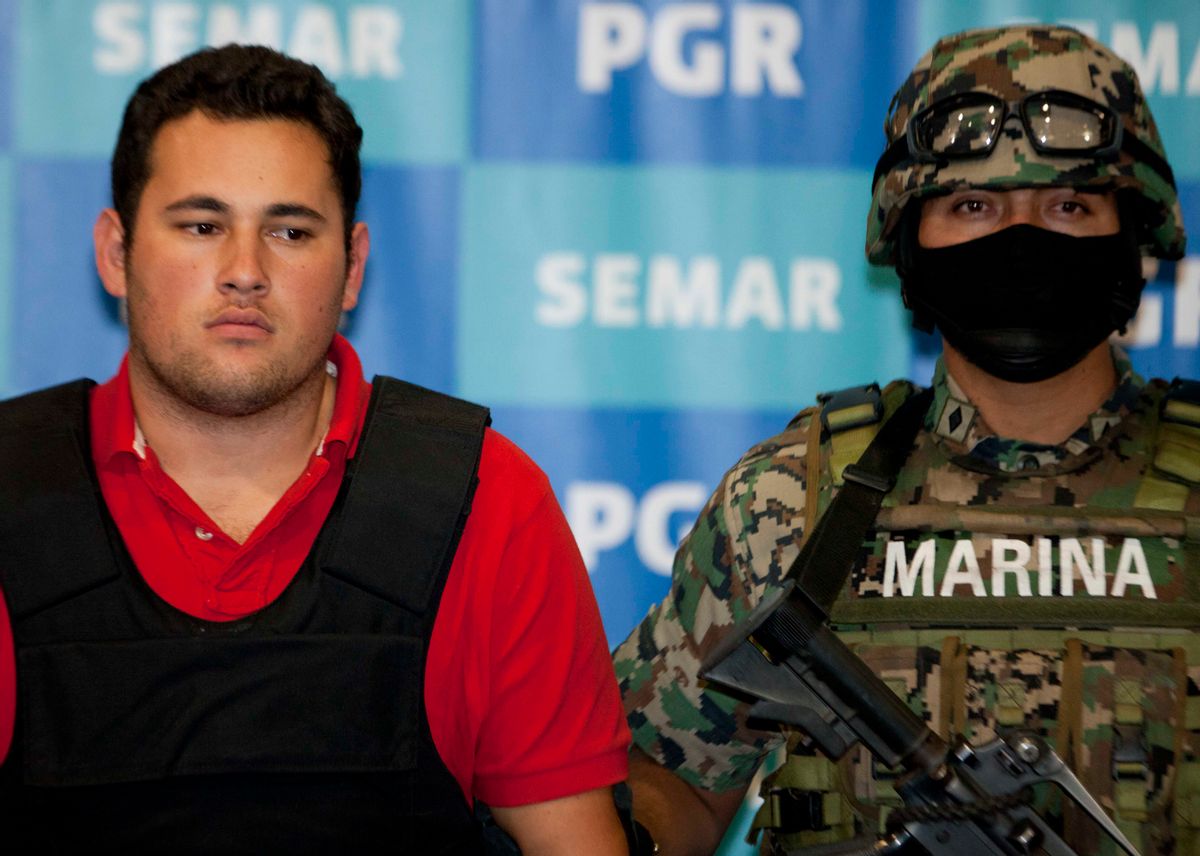 A Mexican marine escorts Jesus Alfredo Guzman Salazar, left, during his presentation to the media in Mexico City. (AP/Eduardo Verdugo)
--

Badiraguato, a town of 7,000 in Sinaloa state, shouldn’t have such wealth. It’s among the poorest municipalities in Mexico. But you’re better off not asking questions here.

This is a secretive place, hot and quiet in the Sierra Madre foothills. There’s an army barracks, but soldiers mostly stay inside.

For well over a century, local farmers have harvested marijuana and opium in the rugged mountains surrounding Badiraguato. Since the 1980s, the Sinaloa cartel has acted as their Wal-Mart, transporting the mind-bending cargo north with quasi-corporate efficiency, and distributing it to a narcotics-craving United States market.

Ever since former president Felipe Calderón deployed thousands of soldiers and federal police to combat organized crime in 2006, the country has been ravaged by violence. An estimated 70,000 people have been killed in often brutal territorial warfare.

Yes, there have been victories for the government: In March 2009 the attorney general’s office published a most-wanted list of 37 high profile drug lords. As of February 2013, two-thirds of them are either dead or in custody. By now, the majority of the seven major drug trafficking cartels battling for dominance have been crippled. Most have partially or completely fractured into smaller groups. Even the infamous Los Zetas, whose leader Heriberto Lazcano was killed last fall, have recently suffered severe blows.

Only the Sinaloa cartel seems to have survived the onslaught relatively intact.

In fact, some critics of the government even claim Sinaloa has “won” the drug war.

El Chapo is still at large, after his spectacular escape from prison in 2001. In mid-February Guatemalan authorities investigated rumors that he had been gunned down, but the president’s spokesman later told GlobalPost they found no evidence of this. His inner circle cronies Juan José Esparragoza and Ismael Zambada also still operate freely.

And while they succesfully evade capture, the cartel has made substantial territorial advances, and has amassed extravagant wealth.

“El Chapo is going to get stronger if he is not arrested in the next year and a half”, a senior official of the Drug Enforcement Administration (DEA) told Forbes in a June 2011 interview.

Since then, the Sinaloa cartel ousted its rivals in the lucrative smuggling corridors of Tijuana and Ciudad Juárez. El Chapo himself is now the most wanted man on the globe, with US authorities offering a $5 million reward for any information leading to his capture.

In a business as opaque as the drug trade, it’s hard to get reliable figures on the size of a crime group’s territory, the breadth of its wealth or the extent of its market share. Court documents, arrests and drug seizures, however, paint a picture of the Sinaloa cartel as a multinational, highly flexible organization, quick to adapt to new circumstances and showing a resilience unlike any of its rivals.

Compared to its humble beginnings in the 1980s, when it controlled only a single Pacific trafficking route into Arizona, the cartel’s territorial expansion has been staggering. Key areas it now controls include most of Mexico’s Pacific coast states and parts of central Mexico.

Even more impressive is its global reach. Sinaloa operatives have been arrested from Egypt to Argentina and from Europe to Malaysia. Properties attributed to El Chapo Guzmán have been seized in Europe and South America. US law enforcement reports that the group is now present in all major American cities. Recent US court documents involving the case of Vicente Zambada-Niebla, Mayo Zambada's son, even suggest the Sinaloa cartel now controls the cocaine trade in Australia.

Sinaloa's share in the drug market is titanic. Even by the most sober estimates, Mexican drug trafficking amounts to over $6 billion per year, with El Chapo's Sinaloa cartel controlling an estimated half of that market, raking in billions each year.

No wonder Forbes has listed El Chapo Guzmán on its annual list of billionaires since 2009.

“The Sinaloa cartel certainly has the upper hand now,” says Javier Váldez, co-founder of Rio Doce, a Sinaloa-based weekly magazine covering the drug war. “It’s the only cartel that has grown over the  years, extending its reach into Europe, Africa and South America, while all others have lost.”

Some have accused the Calderón administration of collusion with El Chapo, claiming the government struck a deal by taking out its rivals. And last October, leaked emails from security analysis firm STRATFOR suggested that even the US government facilitated them.

Accusations of government collusion, however, are rejected by Malcolm Beith, a British-American journalist and author of "The Last Narco," a book about El Chapo Guzmán. “Since 2009, the Sinaloa cartel has been hit very hard too, completely obliterating those criticisms,” he contends.

Beith points out that Sinaloa´s survival and recalcitrant power should instead be attributed to the way it operates.

“There is a level-headedness about the leadership that the other groups lack,” he says. “To the authorities, first priority always has to be quelling violence. When other groups throw grenades into a crowd of innocents or behead[s] people, it's obvious what needs to be done. Sinaloa has perpetrated its share of violence, but by and large it did not cause disruption to the general well-being of the population.¨

The Sinaloa cartel’s relatively low profile in terms of violence is partly due to its relatively long history – it’s been around for 25 years. In Sinaloa itself the goup is deeply rooted in society. Not only do its senior leaders hail from the region, but the cartel reputedly funds hospitals and schools, thus winning support from locals who aid the capos in their never-ending struggle to escape arrest.

El Chapo and his cronies have also perfected the strategy of “bribe over bullet,” preferring to corrupt authorities rather than fighting them into submission. Government officials on all levels in Mexico have been accused of being on Sinaloa’s take, as have some of their US counterparts.

“El Chapo has an apparent ability to [allegedly] corrupt and infiltrate elements of law enforcement on both sides of the border and seemingly play the authorities' every move to his advantage,” Beith says. “When the Mexican army moved into Juárez, so did El Chapo, seizing an opportunity. When the authorities took down the Arellano-Félix cartel, El Chapo was already poised to take Tijuana.”

All things considered, El Chapo Guzmán and his Sinaloa cartel seem to have been profiting rather than suffering from the drug war, Javier Váldez argues. “The drug war has helped them stay on top. While they continue to keep the heat away from their home turf, their rivals have been weakened.”

The most recent National Drug Threat Assessment of the Justice Department (2011) suggests the same, by stating that overall drug availability in the US is increasing, as are production of marijuana, heroin and synthetic drugs such as methamphetamine. Those are all businesses in which El Chapo Guzmán and his Sinaloa cartel have a large stake.

“The organization is particularly dominant because it is one of the few that can obtain multi-ton quantities of cocaine from South America, as well as produce large quantities of heroin, marijuana and methamphetamine,” the report claims.

Felipe Calderón left office in December. His succesor Enrique Peña Nieto promises to cut the murder rate in half in the next six years, but most Mexicans doubt he is able to; during his first two months in office at least 1,500 people are estimated to have died in gangland violence.

All the while El Chapo Guzmán continues to make a mockery of the drug war with every day he remains at large. His Sinaloa cartel has been around longer than any other crime group in Mexico, and it may just outlast everybody else.